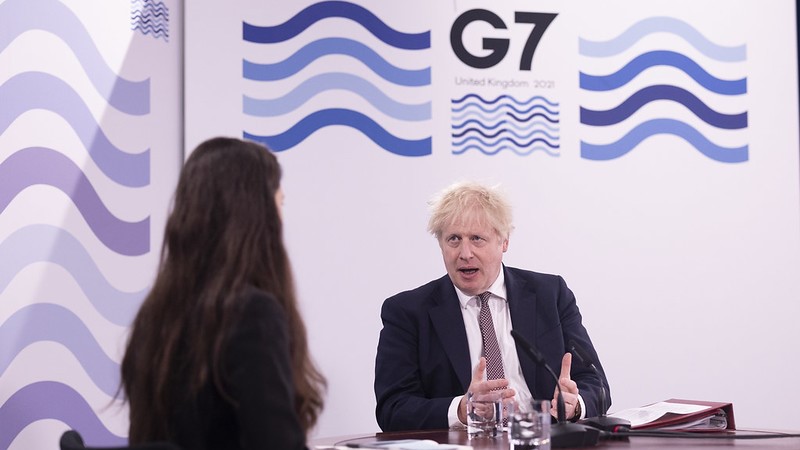 UK prime minister Boris Johnson is interviewed in London ahead of the G7 summit (Photo: Simon Dawson / No 10 Downing Street/Flickr)

The G7 group of rich nations has been tasked to plug the funding gap for the world’s most vulnerable countries to recover from Covid-19 and tackle the climate crisis.

A three-day summit, presided over by the UK, will bring together leaders from Canada, France, Germany, Italy, Japan, the UK and the US at the seaside resort of Carbis Bay in Cornwall from Friday.

“The political alignment to ask countries to come [to Cop26] and signal that they’re going to do more without indicating where the resources and the solidarity are going to come from becomes an ever smaller eye of the needle for [Cop26 president designate] Alok Sharma to walk through,” said Rachel Kyte, dean of the Fletcher School at Tufts University.

While the issues have been on the G7 agenda for months, ministers have left the hardest decisions to heads of government.

At a two-day meeting in London over the weekend, finance ministers merely reaffirmed a commitment to “increase and improve our climate finance contributions through to 2025”, without putting numbers on the table.

“This was actually the opportunity for finance ministers to come up to the plate and talk about sort of amounts [of finance] and creativity in terms of instruments,” said Kyte.

Rich nations pledged a decade ago to collectively mobilise $100 billion a year in climate finance by 2020. While official data will not be available until 2022, the UN estimates donors will fall $20bn short.

UN chief António Guterres has called on the major economies to double their finance pledges at the G7 summit. So far, the UK and the US are the only members to have set out plans to double their pledges to 2025.

Kyte said: “The question for the leaders’ summit is if not the G7, then who? and if not now, then when? This is a consequential week for British foreign policy and climate leadership.”

Nick Mabey, chief executive of think tank E3G, said the G7 was “on a knife-edge” on whether it will deliver the financial package needed for a successful outcome at the Cop26 climate talks.

The success of Cop26 as a “transformational moment” for climate ambition hinges on the delivery of climate finance, he said. “Unless we deliver on support for developing countries, there won’t be any space for climate ambition in Glasgow. We will only be talking about finance. The G7 is the last moment in the year to deliver that package on finance”.

The UK government has made mobilising new climate finance pledges a centrepiece of its G7 diplomacy. Despite putting pressure on chancellor Angela Merkel, whose 16 years in office come to an end in September, to announce greater climate finance, its demands have so far fallen flat.

Canada, France, Italy and Japan “talk a good game” but are yet to make new climate pledges, said Kyte. The US has doubled its financial commitment but from “an extremely low base” and needs to step up its pledge ahead of Cop26, said Peter Betts, a former lead negotiator for the UK and the EU and an associate fellow at Chatham House.

In the UK, prime minister Boris Johnson is facing a revolt inside his Conservative party over the government’s decision to cut aid spending from 0.7 to 0.5% of gross national income during the pandemic. Despite promises that climate aid would be ringfenced, some climate research projects are suffering.

The move “reduces the credibility of the UK in pushing other donors to do more” and could impact the alliance-building the UK will need to land a robust agreement at Cop26, said Betts.

“The bulk of the world’s emissions actually now come from emerging economies, not from developed countries. If you want to have any kind of credibility with those countries you need vulnerable countries with you,” he said.

For Graça Machel, former education and culture minister of Mozambique and co-founder of The Elders, ensuring equitable vaccine roll out is a precondition to gaining the trust of developing nations in the climate talks.

While richer nations have hoarded jabs and rolled out mass vaccination programmes, only 2% of Africans have so far been vaccinated, she said.

And while wealthy governments spent trillions on Covid-19 stimulus packages, debt-laden, climate-vulnerable nations have been left unable to recover from the pandemic, let alone invest in climate action.

“The impact of climate change, cannot be addressed only focusing on the developed world. It has to be equally focusing in the developing world, because either we are all safe or no one is safe,” said Machel.

Last week, prime minister Johnson called on G7 leaders to make concrete commitments to vaccinate the entire world against coronavirus by the end of 2022.

Europe’s floods hit my childhood home, sweeping away my parents’ sense of safety