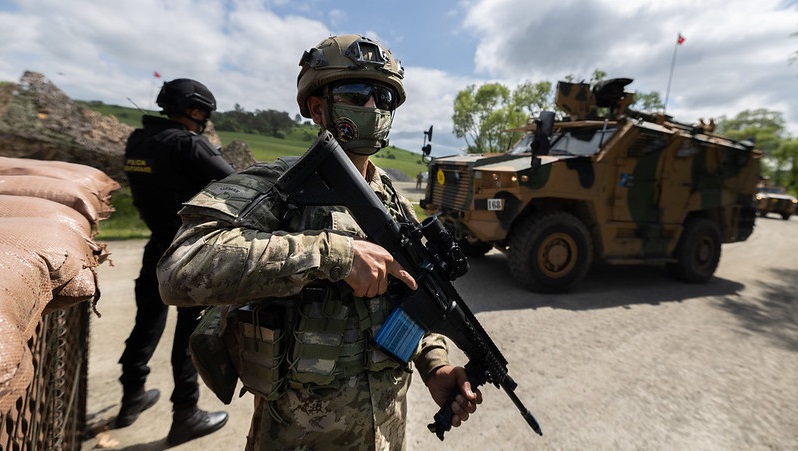 The North Atlantic Treaty Organization (Nato) will consider a target to reduce its net greenhouse gas emissions to zero by 2050, taking on the energy-guzzling machines of modern warfare.

At a Brussels summit on Monday, the leaders of Nato countries asked Secretary-General Jens Stoltenberg to “assess the feasibility” of such a target.

The target will apply to Nato’s operations around the world, mainly in Europe with some in Turkey, Afghanistan and the USA. It will not apply to member countries’ militaries, but could provide a blueprint for similar action.

Doug Weir, research and policy director of the Conflict and Environment Observatory said: “Nato deserves some credit for this. It’s great that the issue of military emissions is finally on the international agenda. It’s a topic that has been ignored for too long.”

Janani Vivekenda, head of climate diplomacy and security at Adelphi, told Climate Home News: “The reason Nato was able to do this was the US administration. This would have been unthinkable just a few months ago. It’s a huge game-changer.”

While some environmentalists had hoped for a net zero target, Vivekenda said a feasibility study was a less glamorous but more practical announcement. “You need to bring the troops along, quite literally,” she said.

The Nato leaders’ communique stressed that emissions reduction should not impair “personnel safety, operational effectiveness and our deterrence and defence posture”.

Under the Paris Agreement, there is no specific requirement to cut emissions from military operations. Many countries fail to report them and estimates are hard to come by.

Analysts at Brown University have used data about the US military’s fuel use to calculate that, in 2017, its military had annual emissions of around 59 million tonnes of CO2 equivalent, similar to Morocco.

Scientists for Global Responsibility have estimated the EU’s military carbon footprint at 25 million tonnes of CO2 equivalent a year and the UK’s at 11 million tonnes.

Nato was created as a bloc to counter the power of the Soviet Union and its satellite states. Its members include Canada and Turkey as well as most European countries.

Militaries can reduce emissions through measures like switching their bases and vehicles to renewable energy and by rewilding land they control.

This can have military as well as environmental advantages. In Afghanistan, convoys of fuel tankers were often attacked by opponents of Nato forces. “You can literally put a human cost on every gallon of fuel that was reaching the camps,” Vivekanda said.

Attacks on fuel tankers inspired energy efficiency measures, such as better-insulated tents which reduced the need for air conditioning, she said.

The UK has suggested that its military aircraft could run partly on biofuels. The environmental credentials of biofuels have been questioned, as they can come from unsustainable sources.

US President Joe Biden has asked Congress for $200m to develop less polluting weapons and $153m to improve energy efficiency for its vehicles. His administration is also seeking funding to protect military camps against extreme weather.

The Nato communique recognised climate change as a “threat multiplier” and “one of the defining challenges of our times”.

Nato asks its members to spend at least 2% of their GDP on their militaries. Weir said: “If Nato and its member states are serious about reducing their emissions, it is inescapable that they will also need to address the role of growing military expenditure and particular military postures in driving them.”

This article was amended to remove a reference to the Royal Air Force’s net zero by 2050 target, as there is no such target. The Scientists for Global Responsiblity’s estimate of the UK military’s emissions was amended, for clarity and ease of comparison, from 6-11 million tonnes to 11 million tonnes.