By greenwashing Shell, the Science Museum is failing young people

Comment: As a biology and chemistry student I love London’s Science Museum, but its acceptance of oil sponsorship for a climate change exhibition is inexcusable 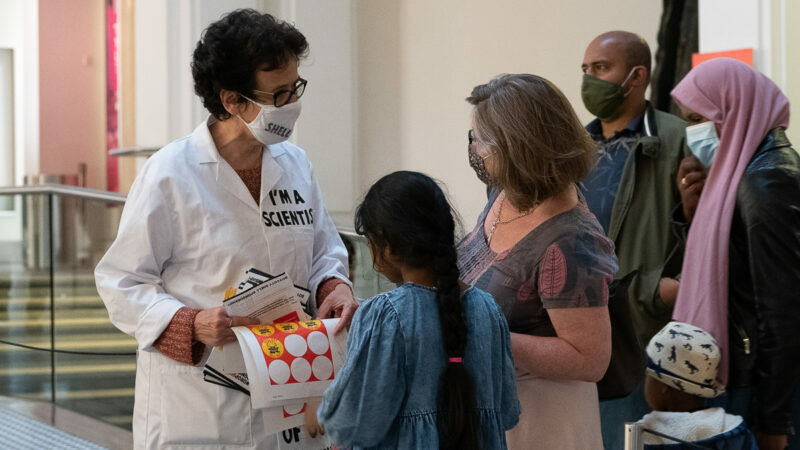 A member of Scientists for XR explains to museum visitors at the Science Museum's "Our Future Planet" exhibition why the group opposes Shell sponsorship (Pic: Ron Fassbender)

On Saturday the 19 June a group of 20 activists, mostly scientists and young people, attempted to occupy the Science Museum in London.

We did this in protest at the Science Museum’s decision to accept Shell sponsorship of their new climate change exhibition “Our Future Planet”.

An occupation was not our first choice of tactic. We had tried all of the “acceptable” tactics. We signed petitions, wrote letters, called a boycott and held a protest outside the museum, but the director and board of trustees ignored us and continued to justify and excuse the sponsorship, leaving us with no choice but to do more.

I genuinely love the Science Museum. I loved it when I was a 9-year-old who dreamed of being an astronomer, who was beyond excited to get to sleep under a rocket. I love it today as a 17-year-old biology and chemistry student, and it’s because I love it that I decided to act.

Because there’s really no justification for any museum accepting oil sponsorship right now. We are in the middle of a climate crisis. Lives are being lost, homes are being destroyed, our planet is on fire and these corporations are the ones fueling the flames. An oil company sponsoring an exhibition about climate change and solutions to the climate crisis is especially wrong.

The Science Museum shouldn’t be helping to greenwash Shell’s reputation. It is a destructive and violent corporation, incessantly pursuing profit in the face of environmental catastrophe. It is complicit in human rights violations like the murder of the Ogoni Nine, and responsible for huge environmental degradation. Just since 2011, Shell has reported 17.5 million litres of spilled oil in the Niger Delta, destroying and damaging people’s homes and livelihoods.

The Science Museum’s director Ian Blatchford seems determined to paint a picture of a false reality. He emphasises Shell’s “commitment” to net zero emissions by 2050. But a Dutch court recently ruled the oil company’s strategy was “not concrete enough and full of caveats”, ordering faster emissions cuts to align with the Paris Agreement.

On Saturday night we saw how far the Museum is willing to go to protect this sponsorship deal. It called more than 40 police officers to arrest and remove peaceful protesters. Young people. Scientists. The people that the Museum is meant to be there for.

The Science Museum stands alone right now. Both by accepting oil sponsorship, something that so many other cultural institutions now refuse to do, and by calling the police and refusing to facilitate peaceful overnight protests like the British Museum did in 2020 and the Tate in 2015.

We were there to create a place of genuine education about the climate crisis, not one led by Shell’s business interests. We had planned for a 24-hour livestream, with guests from around the world to talk about climate justice, solutions to climate change and the very real, very present impacts of the crisis on people’s lives. We wanted to create placards, alternatives to the ones included in the Science Museum’s exhibition which had been obtained without informing the young people who made them about the Shell sponsorship.

The Science Museum knows they can’t defend this sponsorship any longer. Their back is against the wall, and when you can’t justify something with words, you use force and threats. But we will not be threatened. We will not back down and we will not stop fighting until oil is out of not just this exhibition at this museum, but all of them.