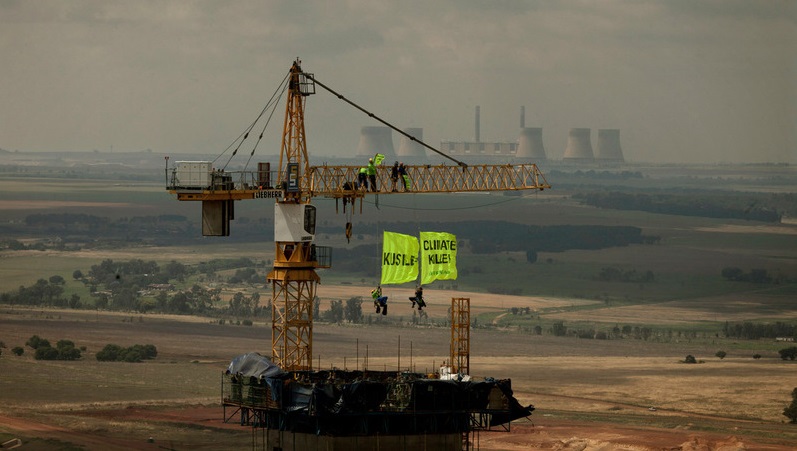 South Africa’s climate advisers are urging the government to commit to a more ambitious 2030 emissions targets by accelerating a shift away from fossil fuels.

In September, the government said it would aim to reach net zero emissions by 2050 — but the plan still allows coal beyond that date.

To achieve its 2050 goal, president Cyril Ramaphosa set up a presidential climate change commission to advise the government on how to ensure a just transition away from coal and reduce its emissions.

In its first public report, the commission recommended the government set a tougher target and limit its annual greenhouse gas emissions to 350-420 MtCO2 by 2030. This would deepen emissions cuts by 31% compared to South Africa’s 2015 pledge, which capped emissions at 614 MtCO2.

Its recommendations are more ambitious than what the government is currently proposing. Under a draft 2030 climate plan, published in March, the government said it aimed to limit its annual emissions to 398-440 MtCO2 by 2030 – a 28% emissions cut compared to the 2015 target.

The commission said there was “scope for considerably greater emission reductions” by accelerating energy efficiency measures, bringing forward the decommissioning and repurposing of coal-fired power stations as they become financially unviable and replacing them with low-carbon energy capacity.

It argued increased climate ambition could help unlock more financial support to help the country move away from coal.

Comment: Delivering an inclusive Cop26 in the age of Covid-19 requires more than vaccines

In a statement, Ramaphosa said he will consider the commission’s recommendations, which will inform a decision on stepping up the country’s climate ambition ahead of the Cop26 climate talks.

Saliem Fakir, executive director for the Africa Climate Foundation, told Climate Home News, the new targets would make ongoing support for coal “untenable”. “If adopted it will be a major breakthrough,” he said.

In a letter, seen by Climate Home News, they write: “What is needed is zero fossil fuels in electricity generation by at least 2040 (though 2035 would be preferred); and a zero fossil fuel economy by 2050. This will mean no new fossil fuel projects come on line or are considered.”

The letter calls on the commission to support a more rapid decommissioning of coal plants, recognising that some coal assets will become stranded. It adds the government should cancel a pipeline of major gas projects, including the proposed 8400MW Nseleni floating gas power plant in the city Richards Bay and a 3000MW gas development in Coega, near Port Elizabeth.

Plans for a 3,300MW coal-fired power station should also be scrapped, they said.

“The commission’s range is still not sufficient,” Melissa Fourie, one of the authors of the letter and the executive director of South Africa’s Centre for Environmental Rights, told Climate Home.

The letter argues for a significantly tougher climate target in line with what would be South Africa’s fair share to limit global heating to 1.5C: capping annual emissions to 274–352 MtCO2 by 2030.

“The low-hanging fruit here is the electricity sector, where we could substantially decarbonise at minimal cost,” said Fourie. “As a first step, the government should abandon its plans for new fossil fuel (coal and gas) electricity capacity.”

The climate commission’s report found that South Africa will require “considerably higher levels of international financial support” to transition away from a coal-dependent energy system.

South Africa estimates it will need $8 billion a year from the international community by 2030 to finance its decarbonisation and adaptation efforts.

State-owned utility Eskom, which operates most of the country’s coal-fired power plants, is asking for $10bn from global lenders to help its transition from coal to renewables.

In 2020, Eskom’s coal plants generated 86% of the country’s electricity, making South Africa the most coal-reliant country among the G20 group of nations.

Eskom is currently building two of the world’s largest coal plants, Medupi and Kusile, which are not scheduled to close until at least 2060. Yet, Eskom’s energy transition leader Mandy Rambharos recently told Reuters:  “I don’t think we can look at 2050 and still see fossil fuels in there to be honest.”