The government is ending a decade-old ban on new forestry concessions, to the horror of campaigners who say the move is incompatible with climate targets 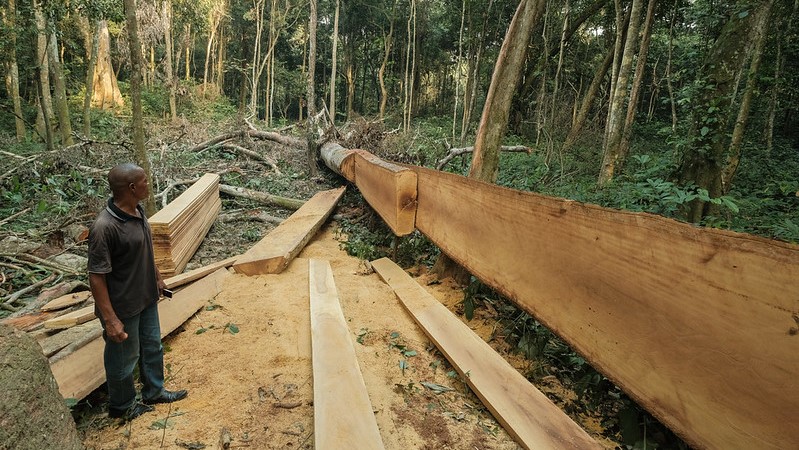 The government in the Democratic Republic of Congo has adopted plans to lift a ban on new industrial logging concessions as part of a package of measures designed to “sustainably manage natural resources”.

The 10-point plan was put forward by vice prime minister Eve Bazaiba, who also serves as environment minister, and was approved by the council of ministers. It includes elaborating a national forestry strategy, reviewing existing forestry concessions and introducing a carbon tax.

Bazaiba told ministers the measures were being taken as part of efforts to improve environmental governance in DRC.

A spokesperson for the environment ministry told Climate Home News officials were preparing a number of governmental decrees to implement the decision.

It comes as the DRC government is in the early stages of discussing a $1 billion forest protection scheme, extending a deal with the Central African Forest Initiative (Cafi) to 2030. Cafi’s donors include Norway, Germany and the UK.

Joe Eisen, executive director of the Rainforest Foundation UK, told Climate Home News that given the deep-rooted corruption, poor environmental practices and social problems linked to existing logging concessions, it was “inconceivable” that opening up more of the forest to industrial logging would be compatible with climate commitments made by Cafi or the DRC government.

Achieving good forest governance in DRC “should entail measures to bring the existing industry under control” – not expanding it, he added.

Campaigners warn that lifting the moratorium would trigger a mass sell-off of new concessions and open up “a new lucrative highway for loggers”, threatening local communities and further exacerbating the climate and biodiversity crisis.

“The minister’s attempt to dress up the lifting of the ban as a ‘good governance’ measure isn’t fooling anyone,” said Irène Wabiwa Betoko, campaign leader for the Congo Basin Forest at Greenpeace Africa. “It’s a cynical plan that will simply turn over more of DRC’s territory to foreign companies eager to trash the rainforest.”

First introduced in 2002, and reaffirmed in a presidential decree in 2005, the ban on logging has been repeatedly violated in recent years.

A civil society consortium led by Kinshasa-based NGO Codelt accused the minister of breaching the moratorium and filed a lawsuit against Nyamugabo. The case is still being processed, while Nyamugabo was replaced by vice prime-minister Bazaiba in April.

Earlier this month, the Congolese Institute for the Conservation of Nature found that six concessions accounting for 1.4 million hectares were illegally allocated in an area covered by a Redd+ forest protection scheme.

The Congo rainforest is the world’s second largest rainforest but increased and sustained forest cover loss threatens its role to suck carbon out of the atmosphere.

In 2020, 490,000 hectares of primary forest were felled in DRC – the second highest amount of any country after Brazil, according to Global Forest Watch. The expansion of small-scale agriculture, fuelwood collection, and illegal logging are the biggest drivers of deforestation.

Greenpeace Africa together with the Rainforest Foundation in Norway and the UK are calling on the government to extend the moratorium.

“Instead of green lighting new paths of destruction, the DRC needs a blueprint for permanent protection of the forest, including management by the communities who live in it and depend on it,” said Wabiwa Betoko.

And the decision doesn’t bode well for the country’s own climate plan.

Speaking at the leaders’ climate summit hosted by Joe Biden in April, president Félix Tshissekedi reaffirmed his commitment to cut emissions 17% by 2030 compared to business as usual and to increase the country’s forest cover from 58% to 63.5% by 2030.

Tshissekedi said the government was “trying to do its part” to meet the goal and it could do a lot a more with the support from the international community.

A 2020 report by the Center for International Forestry Research (Cifor) found that none of the reforms promised to meet the goal had been fully implemented, citing a lack of finance, capacity and political will.

Tshissekedi suggested forest-nations should be paid more for reducing emissions from deforestation and store carbon in forests, suggesting $100 for a tonne of carbon would be a fairer price “that takes into account missed [economic] opportunities”.