Environment minister Barbara Creecy called for quantifiable improvements in resilience to climate impacts, to give the adaptation agenda the same weight as emissions cuts 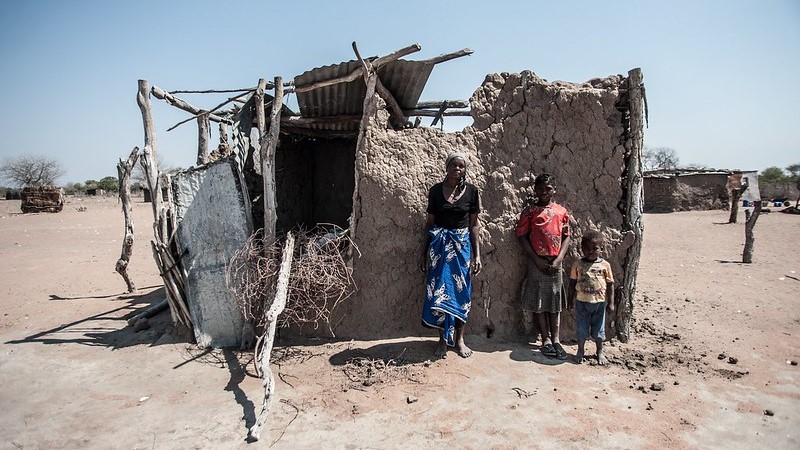 A woman stands with her two grandchildren in front of her crumbling home in the southern Guijá district in Mozambique during a drought in southern Africa in 2016 (Photo: Aurélie Marrier d’Unienville/IFRC/Flickr)

South Africa has called on countries to work towards increasing the climate resilience of the global population by 50% by 2030 and by at least 90% by 2050, as a proposed global goal on adaptation.

Environment minister Barbara Creecy told a ministerial meeting designed to make progress on key issues ahead of the Cop26 climate talks that countries should agree on a quantifiable increase of vulnerable communities’ ability to adapt to extreme weather events, flooding, droughts and sea level rise.

Scaling up adaptation was one of five themes discussed during the two-day summit at London’s Park Plaza hotel, which gathered 51 ministers from a representative group of countries.

Speaking to reporters after the meeting, Cop26 president designate Alok Sharma said countries agreed on the need for Cop26 to” accelerate progress on the global goal on adaptation”.

While there were no breakthroughs on the most contentious issues ahead of the Glasgow summit, Sharma described the talks as “positive” and “hugely refreshing” to meet in-person after more than 18 months of virtual discussions.

Under the Paris Agreement, countries agreed to establish a global goal on adaptation to enhance nations’ adaptative capacity, strengthen resilience and reduce vulnerability to climate change.

But the accord stopped short of setting out what the goal should look like and how progress should be assessed.

While there are well established methods for monitoring emissions and efforts to limit global temperature rise, finding a common metric for various ways of adapting to regional climate impacts is challenging.

In a letter to all countries earlier this month, Sharma said Cop26 needed to start a work programme to define the objective and the indicators against which progress should be assessed.

Nearly 100 developing countries, including South Africa, have previously described progress towards defining and implementing the goal as “glacial” since the 2015 climate accord was signed.

“Cop26 needs to deliver a substantial acceleration,” they said in a five-point-plan setting out benchmarks for success at Cop26.

Zaheer Fakir, a climate negotiator and chief policy advisor in South Africa’s environment minister, told Climate Home News that it was important to reflect the priorities of developing countries.

“South Africa is of the view that limited progress in elaborating granular details on adaptation undermines the political balance achieved in Paris, as well as the intent of achieving parity between mitigation and adaptation,” he said.

Creecy also floated a number for the next collective climate finance goal, suggesting $750 billion should be mobilised annually by 2030. Talks on the issue are due to start in earnest in Glasgow on how to go beyond an overdue $100bn target.

In a proposal ahead of the meeting, nearly 100 developing countries said rich nations should supply at least $100bn a year of public finance from 2025, to be supplemented from other sources.

Neither idea got much reaction from the states that would be expected to deliver.

But UN Climate Change head Patricia Espinosa said the tone of the conversation on finance was shifting.

“I think we are entering into a very serious and deeper conversation regarding climate finance ,” she said.

Espinosa said discussions across the two-day meeting had been “unusual” in that ministers were “really engaging with each other in a conversation” rather than merely reiterating entrenched positions. Potential landing zones and compromises emerged, she added, “but the homework is not yet done”.

To make progress in the next three months, the UK has mandated a small group of countries to advance discussions on specific topics.

Canada’s Jonathan Wilkinson and Germany’s Jochen Flasbarth have been tasked to deliver a roadmap for how donor countries will meet and exceed the $100bn milestone for climate finance.

Rwanda and Switzerland will hold informal ministerial discussion towards an agreement on aligning countries’ climate plans to cover a period of 5 or 10 years while Singapore and Norway will seek common ground on carbon markets.

Meanwhile, the UK will continue its work to keep the 1.5C temperature goal within reach, pursuing a contentious global agreement to exit coal.

Sharma said he was “very disappointed” that the G20 failed to sign up to that agenda last week.

“Unless we are going to get all countries signed up to an unabated coal phase out, keeping 1.5C within reach is going to be extremely difficult,” he said. The UK will continue to discuss the issue with G20 nations to “see how we can try and get this over the line over the coming months”.