The Intergovernmental Panel on Climate Change has published its first update on the physical science of climate change since 2013. Here are the key messages 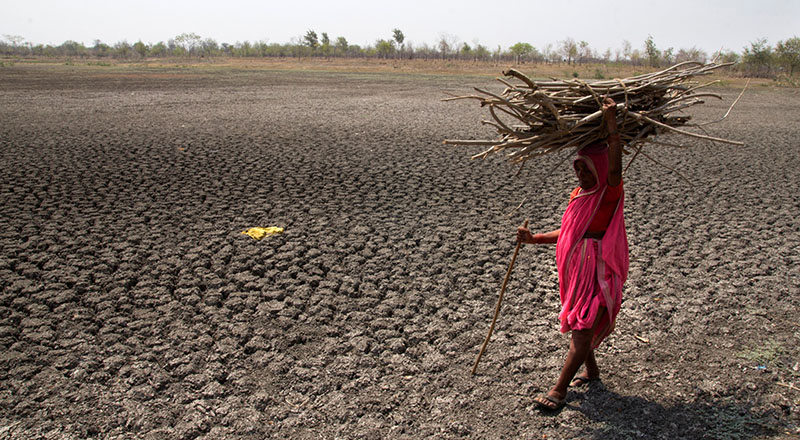 Khomnal Village pond at Mangalwheda taluk, Solapur district in Maharashtra usually has water all year round - but not now (© Subrata Biswas / Greenpeace)

The UN’s climate science body has published a major report on the physical changes happening and projected to occur as a result of human activity, from devastating floods to destructive wildfires.

It is the first scientific review since 2013 when the Intergovernmental Panel on Climate Change (IPCC) started its last round of assessment reports, AR5.

Assessment reports come in groups of three. This first one outlines the projected impacts of five emissions scenarios, which range from global net negative and net zero to emissions doubling by 2050 and 2100, compared to current levels.

The second and third reports, due to land in early 2022, will look at how to adapt to these impacts and how to prevent the worst case scenarios.

Here we round up five key messages from this landmark report.

The warming of recent decades has not been seen for millennia, is happening rapidly and almost everywhere on earth and has reversed a long-term global cooling trend. We need to go back around 125,000 years to find evidence of warmer global surface temperatures, spanning multiple centuries.

That leaves an increasingly narrow pathway to stabilising temperatures at 1.5C above pre-industrial levels by the end of the century, the most ambitious goal of the Paris Agreement.

Under all emissions scenarios outlined in the IPCC report, the earth’s surface warming is projected to reach 1.5C or 1.6C in the next two decades.

The threshold has come closer partly because scientists have incorporated new datasets in their estimate of historic temperature rise, including from the fast-warming Arctic. That adds 0.1C to the estimate of historic warming. High global emissions since the last assessment reports are continuing that trend.

For any chance of meeting the goal seen as essential to the survival of some vulnerable communities and ecosystems, drastic reductions in CO2 would be needed this decade and net zero emissions by 2050.

While AR5 concluded that human influence on the climate system is “clear”,  AR6 said there is “high confidence” that human activities are the main drivers of more frequent or intense heatwaves, glaciers melting, ocean warming and acidification.

“It is unequivocal that human influence has warmed the atmosphere, ocean and land,” the report concludes.

There have been enormous developments in attribution science since the last IPCC report. With enhanced models, scientists are now able to quantify how much more likely or intense extreme weather events were because of climate change.

Recent studies have shown that the Siberian heat wave in 2020 and extreme heat across Asia in 2016 would never have happened without humans burning fossil fuels.

“There has been a real push linking extreme events to societal impacts,” said Dann Mitchell, professor of climate change at Bristol University, citing a 2016 study which found that 506 of the 753 fatalities during the Paris heatwave in 2003 could be blamed on climate change.

Timeline: How the science linking climate change to extreme weather took off

Climate models have improved since the last IPCC report, enabling scientists to analyse current and projected temperature and hydrological extremes at a regional level and understand what global climate impacts will look like in different parts of the world.

Modelling shows that the Arctic is warming faster than other regions and that high latitudes in the Northern Hemisphere are projected to warm by two to four times the level of global warming. While warming in the tropics is slower, it is noticeable because temperatures over land near the equator do not vary much year on year in the absence of human influence.

The Gulf Stream is very likely to weaken over the century, according to the report. A complete collapse of the Atlantic Ocean current would disrupt regional weather patterns, weakening African and Asian monsoons and strengthening dry spells in Europe, scientists warn.

“The climate models have improved since the last report, they have higher spatial resolution which allows you to see more regional impacts and they are better at simulating what will happen in the future in specific regions,” Stephen Cornelius, the IPCC lead for WWF, told Climate Home News.

4. We are closer to irreversible tipping points

The report sounds the alarm about the possibility of irreversible changes to the climate, often called tipping points.

“The probability of low-likelihood, high impact outcomes increases with higher global warming levels,” the report notes. “Abrupt responses and tipping points of the climate system, such as strongly increased Antarctic ice sheet melt and forest dieback, cannot be ruled out.”

The melting of Antarctic ice sheets could cause sea levels to rise more than a metre by 2100 and 15 metres by 2500.

“We are now observing climate change with our own eyes in ways we did not do so before. Many temperature extremes are outside the bounds of natural variability and triggering extreme events, such as wildfires,” said Corinne Le Quere, a climate scientist at the University of East Anglia, at a briefing last month.

The “substantial increase in risks” was highlighted in recent analysis which showed that parts of the Amazon are now emitting more carbon than they absorb, Emily Shuckburgh, a University of Cambridge climate scientist, said at the briefing.

5. Methane emissions are an important lever

For the first time, the IPCC has dedicated an entire chapter to “short-lived climate forcers” such as aerosols, particulate matter and methane.

Methane levels are now higher than at any point in the past 800,000 years and are well above the safe limits outlined in AR5. Methane, which is released into the atmosphere from abandoned coal mines, farming and oil and gas operations, has a global warming impact 84 times higher than CO2 over a 20-year period. It is responsible for almost a quarter of global warming.

Ecosystem responses to global warming, such as thawing permafrost and wildfires, are highly likely to further increase concentrations of methane in the atmosphere.

The authors state that a strong and rapid reduction in methane emissions would not only curb global warming but also improve air quality.

Despite its global warming impact, methane has received far less attention than CO2 and is not included in most countries’ climate pledges.

“A sharp reduction in methane would give you a short-term win, but it has largely been ignored by governments to date, all the focus has been on CO2 net zero targets,” said Richard Black, senior associate at the Energy and Climate Intelligence Unit (ECIU).