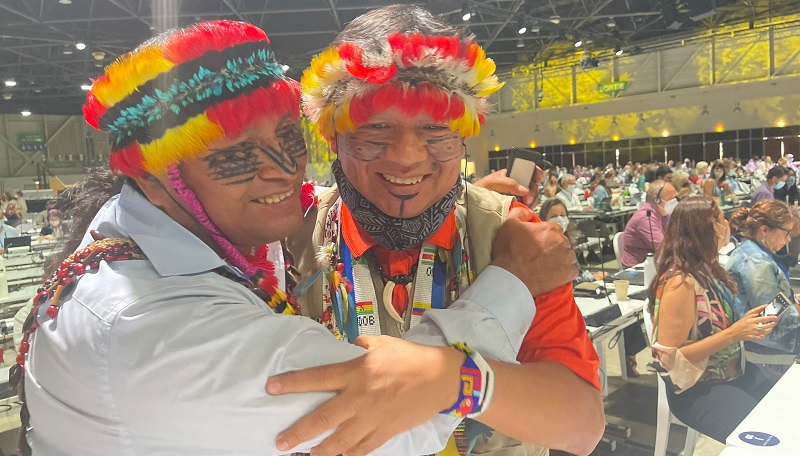 Members of COICA celebrate after the IUCN Congress endorsed a motion to protect 80% of the Amazon by 2025 (Photo: COICA)

Campaigners and governments have backed calls to protect 80% of the Amazon by 2025 during a major conservation summit in the French port city of Marseille.

The world congress of the International Union for the Conservation of Nature overwhelmingly voted for a global pact to protect the world’s largest tropical forest — putting conservationists on a collision course with Brazilian president Jair Bolsonaro.

The proposal was submitted by the Coordinator of Indigenous Organisations of the Amazon Basin (Coica), whose members erupted in joy when the vote results were announced. The motion was formally supported by 17 civil society groups from across the world.

José Gregorio Díaz Mirabal, general director of Coica, described the proposal as “a plan for the salvation of indigenous peoples and the planet”.

“We have achieved a first step. For the first time in the history of the IUCN, a motion by indigenous peoples has been approved; a proposal that was not born in Europe but in our territories,” he told Climate Home News.

In total, 61 countries members of IUCN backed the motion, which is not legally binding, and 42 abstained. None voted against.

Brazil, which is not an IUCN member, could not participate in the vote. But Brazilian experts say president Jair Bolsonaro is highly unlikely to take notice of the verdict, which clashes with his agenda to open up the Amazon to business interests.

The motion urges governments to promote efforts to restore at least half of the Amazon’s degraded forests by 2025 and to work with indigenous peoples’ to fully recognise and delimit all their ancestral land and territories.

Coica said Amazon countries must enable indigenous peoples and local communities to govern protected areas that overlap with their territories. They further called on states to ban industrial activities in primary forests and mobilise more funding to restore ecosystems.

But in Brazil, the opposite is taking place. The Bolsonaro administration is pushing through a series of laws to roll back indigenous rights, environmental licensing standards, and land grabbing legislation, all of which prevent forest clearance, campaigners say.

Deforestation in the Amazon rose 17% in 2020 compared with the previous year. The world’s largest rainforest is now emitting more carbon than it absorbs. Humid primary forest loss in the Brazilian Amazon increased 15% during that time.

The UN backed Science Panel for the Amazon, which is composed of 200 scientists, found that 17% of the Amazon basin’s forests have been felled. It warned that if combined deforestation and degradation surged to 20-25%, the forest could reach a tipping point. Rainfall would dry up and large swaths of the forests could turn into savannah, resulting in massive carbon emissions.

Global efforts and initiative to protect the Amazon have usually been met with claims about foreign interference and breach of sovereignty, Moutinho said.

However, outside of Brazil, the vote “certainly could reinforce the view that to protect the Amazon forest, we urgently need to protect indigenous rights to their lands,” he said.

Izabella Teixeira, Brazil’s former environment minister and co-chair of the International Resource Panel, told Climate Home the motion could be used by civil society groups in Brazil to call for environmental protection ahead of next year’s presidential election – an issue she said will be “critical”.

Mirabal, of Coica, said he hoped the motion could be translated into an action plan and implemented. He said Coica would take it to governments in South America and beyond to Europe, the US and China to drum up support.

“We want this motion to generate projects and political support for our territories, but also conserve and protect our home,” he said. “Trust us, we are going to do everything possible. But we need financial and technical support, the political will of governments, and of all the allies who today voted for us,” he said.