From persuading business leaders climate is “not a hippy issue” to putting a spotlight on environmental justice, the conversation in New York is moving with the times 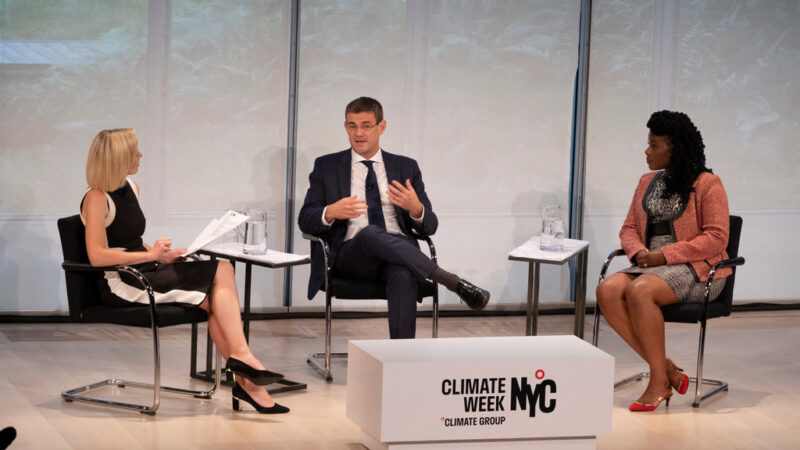 By Megan Darby and Zak Derler

At the first Climate Week NYC in 2009, a bunch of pranksters calling themselves the Yes Men distributed fake copies of the New York Post with the front page headline “We’re screwed”.

Denmark’s climate minister Connie Hedegaard put it more politely at the official launch, saying: “Remember, we cannot press the undo button if the climate gets out of hand.”

She was trying to rev up ambition to land an international climate deal at a December summit in Copenhagen. That year, the stars did not align – as has been well documented. But the model of bringing together movers and shakers from business, politics and civil society on the sidelines of the UN General Assembly to mobilise climate action stuck.

“One thing that was less clear in the early days of the climate negotiations, the 1997 Kyoto talks, for example, but became excruciatingly clear in Copenhagen, is that the major political disagreements need to be ironed out prior to the major conferences,” says Kalee Kreider, a public affairs consultant and senior advisor to the UN Foundation. “The extent to which Climate Week can help to educate those convenings is critical.”

This year, even as the coronavirus pandemic drags on, the thirteenth Climate Week NYC involves no fewer than 535 events, in person and online. It spans the same spectrum as ever from artistic interpretations of the climate crisis to coalition-building at the highest level of politics, with a multiplying array of private sector and civil society initiatives in between.

In the early days, Climate Group CEO Helen Clarkson says, the week was focused on making a business case for climate action – persuading busy executives that “this is not a hippy issue”. Now, the conversation has moved on to “being a lot more practical about what it is they need to do”. This can, ideally, inspire policymakers and politicians to go further with their commitments.

Then there is “The Hub Live”, featuring a carefully curated lineup of speakers, with plenty of space allowed for mingling over coffee. “It is a very broad church,” says Clarkson: “A place for practitioners to come together and exchange ideas.”

A much broader array of affiliate events are only lightly vetted by the Climate Group and organised under ten themes, ranging from finance to sustainable living. This is where some enter controversial territory.

Canadian oil executives used the platform on Thursday to promote their “Oil Sands Pathways to Net Zero” initiative – a goal that only covers operational emissions, not the emissions when the oil is burned.

For a counterpoint, a panel run by the Stockholm Environment Institute highlights the incompatibility of increasing oil and gas production with safe climate limits, sharing tools for “rapid threat identification of fossil fuel expansion projects”.

It has always been a business-friendly milieu. While Clarkson readily acknowledges that the climate crisis was forged in the market’s failure to price in environmental damage – externalities, in economics jargon – she has little truck with anti-capitalism.

“We don’t have time to overthrow capitalism and come up with a whole other economic system,” she tells Climate Home. The week is about  “solving climate with what we have got”.

But as the week grows and evolves, the organisers are looking beyond men in suits for inspiration.

“The event was originally set up by the Climate Group as a week that could inspire businesses and governments to take action in a positive environment which celebrates ambition and success,” says Adam Lake, head of this year’s Climate Week NYC. “While that is still at the core of what we do and why we do it, over recent years it has evolved to become a more globally focussed event.”

Before setting up her own firm, Kreider was communications director for former vice president Al Gore. She has seen Climate Week NYC from a variety of perspectives since its inception, having attended both as a participant and speaker and serving as the MC for the 2012 opening ceremony.

“In the beginning it enabled business, in particular, a way to engage on the issue in a non-partisan way. But over time, it has expanded, as the issue has grown, for civil society to become much more engaged on the climate issue,” Kreider tells Climate Home.

A focus on business always risks reflecting and reinforcing the unrepresentative state of corporate leadership: pale, male and stale. There would be no more all-male panels on Clarkson’s watch, she determined when she took over in 2017, but on other dimensions of diversity, there were still gaps.

In February, The Solutions Project, an organisation representing the climate leadership of women and people of colour, launched the first ever Black Climate Week. This was, in part, to draw attention to the lack of climate justice and grassroots organisers represented at Climate Week NYC. The team was pleasantly surprised by the response.

“A lot of organisations would have gotten defensive about the criticism,” says Gloria Walton, CEO of The Solutions Project, “but instead, Climate Week asked us to partner, and join forces, to make sure equity considerations are woven throughout the entire programme.”

As a result of its partnership with The Solutions Project, Climate Week NYC made environmental justice one of the ten key themes and put Walton on the opening ceremony stage. That meant putting a spotlight on the work of grassroots organisers in communities hit hard by climate change and pollution.

“We hope that the relationships formed through Climate Week NYC can support transformational change on the ground, which has been innovating at the intersections of many global crises, including climate, for decades largely without scaled support from industry,” says Walton.

“This year looks different than before. It’s important to celebrate that the needle is moving AND it is just the beginning.”

Early arrivals chat in the audience at the opening ceremony of Climate Week (Pic: Climate Group)

When Covid infections spread across the world in early 2020, it forced event organisers to drastically rethink their plans. The Climate Group took an early decision to hold Climate Week NYC online.

The downside was obvious: it is much harder to get participants talking to each other in a virtual space, no matter how you try to replicate the coffee-break vibe.

The upside was having far fewer hurdles to getting speakers from all around the world, from scientists embedded in the Amazon jungle to an Indian industrialist with a penchant for poetry. And of course there were fewer air miles travelled.

A year later, while travel restrictions persist for many, the organisers were able to get people together in a room again for a handful of events, including the opening ceremony. At the same time, a partnership with TV networks took the issues beyond Climate Week NYC’s core audience to millions of US viewers through seven late night comedy shows.

“The future is hybrid,” says Clarkson, adding: “I hope that next year the balance swings back a bit more to in-person.”

This special report was produced in partnership with The Climate Group. See our editorial guidelines for what that means.