As Angela Merkel’s 16 years leading Germany come to an end, experts praise her international climate record but say she was too timid domestically 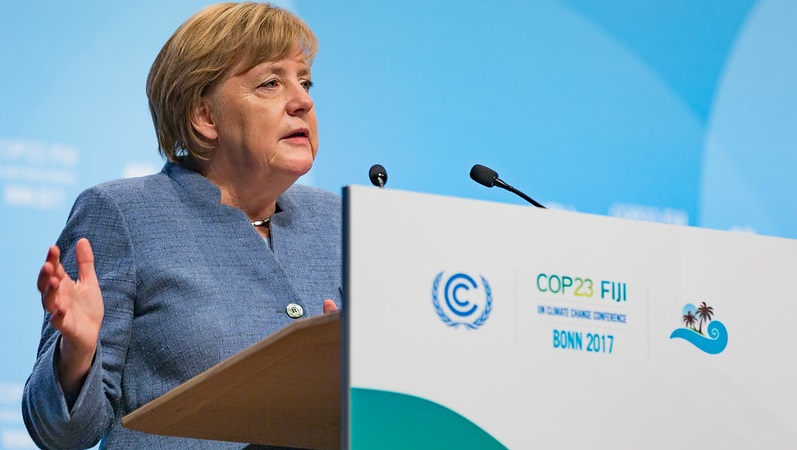 After nearly 16 years in power, German chancellor Angela Merkel will step down after Sunday’s federal election.

Very few political careers end on such a high. She remains hugely popular in Germany and across the world and the two leading candidates for chancellor are trying desperately to convince voters of their similarities to her.

Throughout her time in politics, she has talked of the need for climate action. Latterly, she billed herself as “the climate chancellor” and recently told press “my political life has been marked by working for measures against climate change”.

Experts Climate Home News has spoken to say that reputation is only partly deserved. While nobody has done more than her on the international stage, they said, domestically she has been too reticent to take on Germany’s powerful coal and car lobbies.

French diplomat and Paris agreement architect Laurence Tubiana summed this record up, telling Climate Home News: “Merkel’s climate legacy is impressive at the EU and international levels, although her caution domestically has been disappointing.”

From near its beginning, Merkel’s political career has been tied up with climate change. Her second ministerial job was as minister for the environment between 1994 and 1998.

Perhaps informed by her training as a physicist, she took climate change seriously from the start. In 1995, she wrote: “Greenhouse gas emissions do not only have to be stabilised, but have to be reduced as quickly as possible.”

‘You were the future once…’

Angela Merkel at COP1 in Berlin, 1995 (pic @UNFCCC). Tomorrow the erstwhile ‘climate chancellor’ makes her final speech at the Petersberg Dialogue… will she end with a Germanic flourish on GHG targets & finance? pic.twitter.com/wFWZPkRyWJ

In this role, she oversaw the very first conference of parties (Cop) to the UN framework on climate change. Cop1, as it was called, took place in Berlin.

Out of this came the Berlin mandate which in 1997 led to the Kyoto protocol being signed, the first international climate agreement.

Former US climate negotiator Eileen Claussen told Time magazine: “Kyoto would not have happened without her.”

These achievements brought her to prominence and, although her party lost power in 1998, she was her party’s candidate for chancellor by the time of the 2005 election.

She won that election by a tiny margin – the first of four election victories.

Back on the international stage, she pushed for a successor to the Kyoto agreement, which was due to expire in 2012.

As the host of the 2007 G8 summit in Heiligenddamm, she put climate change at the top of the agenda, trying to convince a sceptical George W Bush to take climate change seriously.

Ahead of the 2008 Copenhagen Cop talks, she persuaded the EU to pledge to reduce emissions by at least 20% by 2020 – although she was unable to convince the rest of the world to do the same.

Lutz Weischer, head of policy at Germanwatch said that after the failure in Copenhagen, “everyone was depressed”.

So, the next year, Merkel invited world leaders to the first Petersberg Dialogue to continue talks.

“That was really important in getting the whole attempt at finding international agreement moving again,” he said.

When an agreement was finally struck in Paris in 2015, Merkel again played a key part in delivering it.

According to the Guardian, she convinced Russian president Vladimir Putin not to stand in the way of a deal.

A year later, the deal was threatened when Donald Trump pulled the US out. Without the world’s biggest economy on board, there were worries other countries could follow.

But at the G20 summit in Hamburg, Merkel persuaded every nation apart from the US to sign a statement defending the Paris Agreement, leaving Trump isolated in his attempt to wreck the deal.

Throughout this period, Merkel has been praised by developing country negotiators.

As Brazil’s environment minister, Izabella Teixera worked with Merkel in the run-up to Paris. She told Climate Home News: “Merkel worked hard and considered climate challenges… we will miss her.”

This generosity is not limited to Brazil. Of 23 rich countries, Germany is one of only three to have contributed its “fair share” to the collective climate finance goal of $100bn a year. That’s according to analysis of 2017-18 figures by the Overseas Development Institute.

Regionally, it was under Germany’s EU Presidency that the target to reduce emissions 55% below 1990 levels was agreed. “She and the German government put a lot of political capital into ensuring that was reached,” said Weischer.

But domestically, Merkel’s legacy is far less impressive. As she herself told press recently: “Compared to the goal of staying well below a rise in temperature of 2C, and possibly achieve 1.5C, not enough has happened and this is true, not just for Germany, but for many countries around the world.”

Germany’s emissions went down 28% from 1994, the year she took over as environment minister, to the latest figures in 2019.

The country’s biggest weaknesses are coal and cars. Although Germany was an early and enthusiastic adopter of renewables, the country still gets around 30% of its electricity from coal and does not  plan to phase it out until 2038.

This is “too late – by at least eight years,” said Weischer: “Germany’s addiction to coal has continued for too long”.

Merkel has been reluctant to overrule the leaders of coal-producing regions like Saxony, Saxony Anhalt, Brandenburg and North-Rhine Westphalia, said Weischer.

“Phasing out coal isn’t easy. Especially in the East where there aren’t other jobs and the extreme right and right populists are quite strong and they don’t want to give them an additional boost.”

“One thing every leader needs is followers,” said Yvo De Boer, the former UN climate chief from 2006 to 2010. “She could only take Germany as far as the public and politicians were prepared to go.”

He added: “Coal is synonymous with jobs and political interests in parts of the country. That has limited her capacity to act. But she has managed to phase solar in faster with intelligent legislation”.

Simimlarly, Merkel has avoided confrontation with Germany’s powerful car lobby. Her party is strong in the south of Germany, where many car-makers are based.

To appease this lobby, she argued in 2013 for weaker regulations on emissions standards in the European Union. She won and the rules were watered down.

Although German car-makers are beginning to prioritise electric models, Germany has been lobbying the EU against phasing out internal combustion engines by 2035.

German government data shows that Co2 emissions from road transport were higher in 2019 than they were in 1990.

Richard Black, director of the Energy and Climate Intelligence Unit and former BBC environment correspondent, said Merkel has “failed to be firm with the coal and car industries”.

With Germany’s election likely to result in extended coalition talks before a new government can be formed, Weischer said, Merkel’s time as chancellor is not quite over and she may still represent Germany at Cop26 in Glasgow.

But when she does depart, De Boer said he’s worried about who will take her place “bashing heads together” on the international stage.

“What’s going to happen to us now? he asked. “She played unique, impressive and important role.”