The IMF trust fund could be worth up to $50 billion and meet vulnerable countries’ call for support to address the triple crisis of debt, Covid and climate change 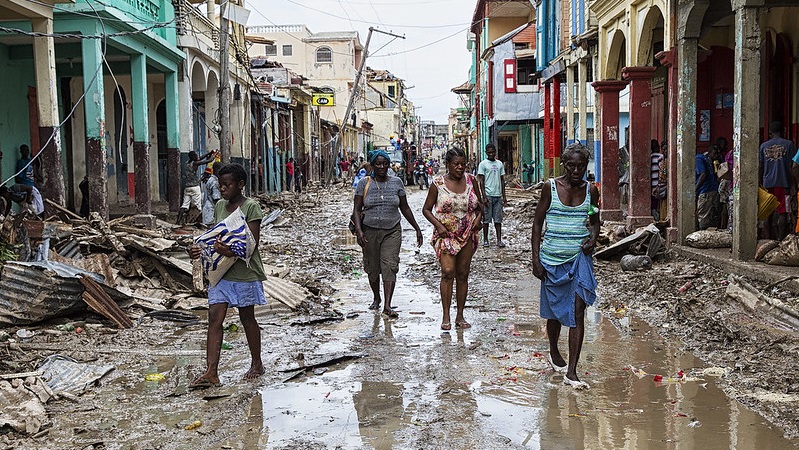 Women walk in a street of Les Cayes in the aftermath of hurricane Matthew in Haiti in 2016 (Photo: UN Photo/Logan Abassi/Flickr)

The International Monetary Fund is developing a funding facility worth up to $50 billion to boost climate resilience in debt-burdened poor and vulnerable nations.

Its proposed Resilience and Sustainability Trust would redistribute affordable finance from rich to poorer countries along with policy support to manage macro-economic climate risks.

Finance ministers from the G20 major economies endorsed the idea and asked the IMF and the World Bank to work together to deliver it.

Experts hailed the move as “pivotal” in helping vulnerable nations address the triple crisis of debt, Covid and climate change. Advocates said it could fill a gap in the climate finance architecture – although one critic said the money would be better routed through established climate funds.

Since the start of the coronavirus pandemic, cash-strapped developing countries and small island states have been pleading for financial support to make up for the collapse of revenues from tourism and the commodity trade. Low credit ratings mean they can’t easily borrow to finance a green recovery and in many cases are struggling to meet citizens’ basic needs.

Sara Jane Ahmed is a finance advisor to ministers from the V20 group of vulnerable countries, which has lobbied the IMF for the creation of such a fund.

Ahmed said the IMF has traditionally been focused on financial shocks, meaning “the physical shocks caused by climate-fueled disasters have inadequate support”.

Yet climate change spells “economic and financial disruption and destruction for the world’s most climate vulnerable developing countries,” she said. The new trust could support vulnerable nations to develop economic strategies with climate resilience at their heart, she added.

Kevin Gallagher, professor of Global Development Policy at Boston University and a champion for green debt relief, told Climate Home News this was “a pivotal moment”.

The Resilience and Sustainability Trust creates “a largely climate finance fund” of up to $50 billion, he said. “That doesn’t happen every day.”

It could help “fill a gap in the climate finance architecture” by helping emerging markets and developing countries respond to climate disasters, he added.

For example, if a hurricane hits a Caribbean island and wipes out its hotels and roads driving away tourists and collapsing its revenues, the nation won’t be able to pay for imports or pay back existing international debt. The trust would allow countries to go to the IMF for specific climate-related support.

The idea for the trust was born amid a decision by the IMF to inject the equivalent of $650 billion of reserve assets, known as special drawing rights (SDRs), into the global economy to help countries respond to the Covid-19 crisis.

By default, SDRs are allocated to countries proportionally to the size of their economy, which means richer nations receive most of the support. Low-income countries only get about $21bn.

Georgieva has repeatedly urged rich nations to voluntarily redistribute the money to those who need it most and IMF staff have been working on options to do so.

Unlike other IMF funds, the proposed Resilience and Sustainability Trust would provide support for vulnerable middle-income countries as well as the poorest.

By scaling up its size to meet developing countries’ needs, “it could be transformational for climate resilience,” he told Climate Home News.

The IMF said it was “confident” that with the backing from the international community the Resilience and Sustainability Trust “could become operational in just over a year”.

While experts have widely welcomed the creation of the trust, they are poring over the fine print.

A senior UN official told Climate Home News that, to be successful, any mechanism for redistributing the SDRs needed to help countries to “make good on their 2030 climate plans and build resilience”.

Steele, of IIED, said that the SDRs channeled through the trust must be additional to aid money. The UK committed on Wednesday to sharing £1 billion of its £20bn ($27.4bn) allocation with vulnerable countries. Controversially, though, chancellor Rishi Sunak is expected to count this towards a reduced aid target rather than using it to restore previous levels of support.

Steele said the money could lead to policy changes which have so far eluded the Paris Agreement’s main funding mechanism, the Green Climate Fund, which works at the project or programme level.

Hannah Ryder, CEO of Development Reimagined, an African-led international development consultancy, disagreed. In an article for The Africa Report, she argues that SDRs should be re-distributed directly to the Green Climate Fund and the Adaptation Fund – without the need to create another IMF-administered trust.

This, she said, would allow money to be targeted to specific regions and places where it is most needed.

“For Georgieva to be a true hero, she needs to focus on not creating a new fund but on reforming the fund she is in,” she wrote.

In the past, access to IMF funds have come with onerous fiscal conditions that many have argued did more harm than good and people and put countries off using its support.

Gallagher said it was “paramount” that the trust did not impose rigid conditions for accessing cash. “We cannot afford to lock up billions in climate finance.”