Sponsored content: As climate change puts pressure on the already vulnerable drylands of Africa, young people are changing the narrative to fight for resilient futures 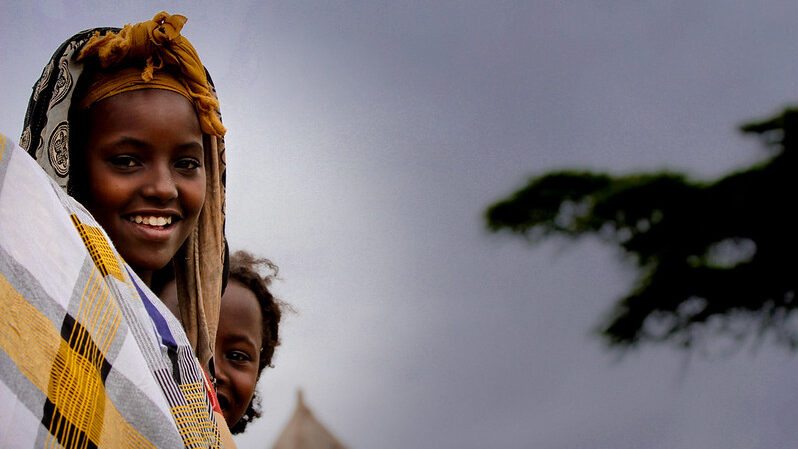 What does climate action look like if you’re a young person from one of the countries with the lowest per capita carbon footprints in the world?

Like Sudan, for instance, whose residents emit around 0.5 metric tons of CO2 emissions each per year – one-tenth those of an average Briton?

The answer: young people are leading on climate action in their communities and are putting healthy natural ecosystems and decent work prospects first. In the drylands of east and west Africa, where traditional economic activities create hardly any emissions, but climate change hits hard, a generation of young people is seeking climate-resilient futures.

In the countries of the dryland belt that stretches from Senegal and Mali in the west to Somalia in the east, under-20-year-olds make up more than half of the population. Pastoralism has long been the traditional way of life here: the keeping of livestock and movement of people and animals across rangelands, from season to season, to provide the animals with food and water.

Now, climate change is putting pressure on the natural resources that used to sustain communities.

Desertification – or land degradation in the drylands – is combining with climate change to harm environments in the region; in turn this is reducing biodiversity and food security for both people and animals, and affecting people’s wellbeing. The Sahara desert expanded by 10% in the 20th century and the annual costs of soil degradation are about 1% of Gross Domestic Product (GDP) in Algeria and Egypt, and about 0.5% in Morocco and Tunisia.

The drylands already suffer from under-development: they have insufficient health and educational services and poor investment in infrastructure, including energy and transport. When young people go to school (and literacy rates are far lower in the rural areas than in cities), their educations are urban-biased and not tailored to the realities of their rural and often mobile lives.

As one pastoralist community advocate said: “Ten to fifteen years ago, education was a loss. Now, it’s getting better, but the big challenge is climate change is coming. Now we are having more than average rain, now….disasters – and Covid. There are new hazards.” The IPCC’s latest report warns that African land temperatures will rise more quickly than global averages, intense rainfall will increase in the region and the timing of west Africa’s monsoon rains will change.

However, young people are turning the tables on old narratives about the drylands’ vulnerability and lack of promise, and they are reframing the drylands as places of potential and opportunity.

Hon. Adjany Costa – advisor for environmental affairs to the President of the Republic of Angola recently noted: “Every ecosystem has their own dynamic and importance, and drylands are extremely important, not just for the survival of biodiversity and biodiversity in general, but also for humanity and our survival and culture. People should know that Africa’s drylands are not a dead end, they are something worth fighting for.”

Charity Lanoi, a drylands restoration advocate, is one of many  young leaders in the east and west African drylands who are taking the initiative to secure environmentally sustainable livelihoods.

The Maasai Wilderness Conservation Trust and Justdiggit foundation have supported Charity and ten other women from her  Masaai ethnic group,  to run a grass seed bank to restore the perennial grasses on which their animals depend for fodder. It has recently become so hot that the grasses die off without this extra effort to plant grass seed on the rangelands. It’s a change from the climate that Charity’s parents and grandparents knew.

As well as vital to securing local livelihoods, this rangeland restoration initiative is a step toward conserving biodiversity and an important carbon store: large amounts of carbon are locked up in the soils of rangelands, and degradation releases them.

Charity is not the only young dryland resident to take their future in their hands: young people are creating ‘seed bombs’ to help restore degraded lands in Ethiopia, they are planting native tree species and promoting ecological agriculture across Kenya and they are convening in multistakeholder forums to discuss land ownership and management that give women and young people a greater voice.

A newly-launched report by the SPARC programme, Resilient Generation: supporting young people’s prospects for decent work in the drylands of east and west Africa found that governments and funding agencies are far behind the game in recognising and supporting young people’s initiatives for climate-resilient work and secure livelihoods in the drylands.

The report maps investments by governments and donor agencies at the nexus of climate change adaptation and resilience, youth, decent work, and the drylands. It finds that most investments aimed at young people and climate change are urban-orientated.

Rural youth employment programmes tend to be focused in humid tropical areas and in settled agriculture, not in drylands and rangelands. Investment in green jobs for young people in pastoralist communities is tiny – so far.

As the above stories show: young people don’t want a handout. They have ideas and they are looking for opportunities to have a voice. They want to be equal partners in forging climate-resilient futures in their communities, in restoring places where the natural environment and livelihoods thrive. The question is now: will others join them, and rise to the challenge?

A follow-up article to this one will examine the need to increase climate finance in so-called fragile and conflict-affected situations, which includes some parts of the drylands described here. Please read ‘Exploring the conflict blind spots in climate adaptation finance’.

Supporting Pastoralism and Agriculture in Recurrent and Protracted Crises (SPARC) is a research programme which aims to generate evidence and address knowledge gaps to build the resilience of millions of pastoralists, agro-pastoralists and farmers in communities of Africa and the Middle East.

Mairi Dupar is Senior Technical Advisor in the Global Risks and Resilience Programme at ODI and advises on communication and stakeholder engagement for SPARC in Africa and the Middle East.

Emma Lovell is a Research Fellow in the Global Risks and Resilience Programme at ODI and works on gender equality and social inclusion in risk management.

This post was sponsored by Supporting Pastoralism and Agriculture in Recurrent and Protracted Crises (SPARC). See our editorial guidelines for what this means.