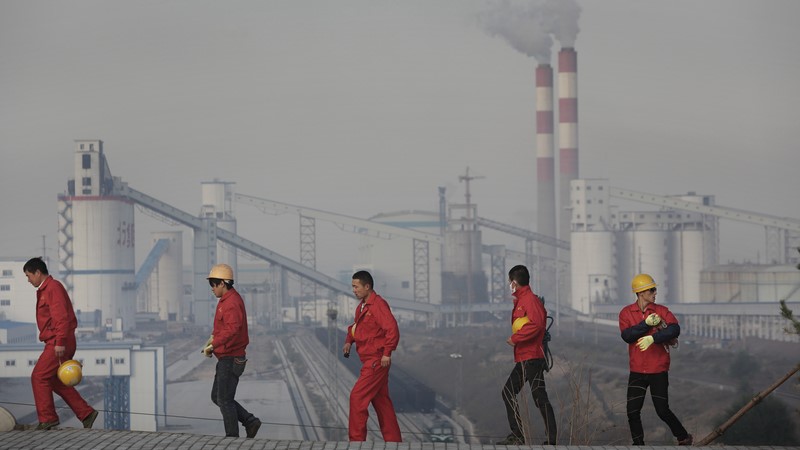 Workers from the Beiyuan Group's facilities in the Jinjie Industrial Park in China on their way to work (Photo: Qiu Bo / Greenpeace)

China has confirmed its goal of peaking emissions before 2030 without stepping up its ambition, as it officially submitted its updated climate plan to the UN.

The government reaffirmed an existing set of targets that was previously announced by president Xi Jinping during the climate ambition summit hosted by the UK in December 2020.

The submission comes days before the start of the UN Cop26 climate talks on 31 October. The document plays down the role of diplomatic pressure on Beijing to update its plan.

“To address climate change is not at others’ request but on China’s own initiative,” it said.

Analysts attributed the absence of new ambition to China’s recent power crunch caused by surging coal prices and to a perceived lack of action from other major emitters, including the US. President Joe Biden has been struggling to pass a critical package of climate policies through Congress.

He said that “domestic economic uncertainties” and “mistrust of the US ability to fulfill its carbon and finance targets” contributed to Beijing’s decision not to step up its climate efforts.

“The planet can’t afford this being the last word,” he added. “Beijing needs to come up with stronger implementation plans to ensure an emission peak before 2025.”

Under the plan, China reaffirmed its goal to peak emissions before 2030 and to lower the carbon intensity per unit of its GDP by more than 65% from 2005 levels.

By 2030, the share of non-fossil fuels, including nuclear and renewables, in energy consumption will  will reach 25% and the installed capacity of wind and solar power will exceed 1.2bn kilowatts. The plan includes a goal to increase the size of China’s forests by six billion cubic metres between 2005 and 2030.

“We can’t sugarcoat it,” said Bernice Lee, a China expert at Chatham House. “Beijing’s new climate plan is disappointing and well off where the world’s biggest emitter needs to be. China has lowballed its target and missed a chance to be recognised as a global leader.”

E3G analyst Byford Tsang said that while the lack of new ambition was “disappointing”, there was “still a lot Beijing could do outside of these targets in the next two weeks” at the G20 in Rome, Italy, this weekend and at Cop26.

For example, China could support a political commitment to keep 1.5C within reach and set an end date for coal use in its power system in the G20 leaders’ statement, he said.