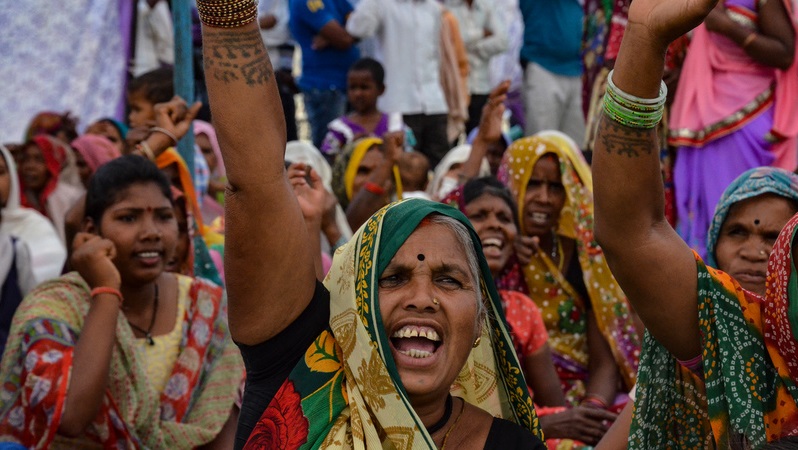 India’s Prime Minister Narendra Modi has pledged that India will reach net zero emissions by 2070 as he announced a suite of new climate targets at Cop26 in Glasgow.

He increased the ambition of India’s renewable and economic carbon intensity targets while calling on rich countries to provide more climate finance to the developing world.

Modi described the announcements as five “elixirs” that will deliver “an unprecedented contribution from India for climate action”.

“Today, India is moving forward with a great deal of courage and ambition on the subject of climate,” he said.

One new target was to reach 500 GW of installed renewable energy capacity by 2030. This target includes small hydropower plants and is an increase on India’s previous 450 GW target.

Finally, the prime minister said that India would reduce its projected total carbon emissions by 1 billion tonnes by 2030.

Charu Lata, an clean energy expert at the Natural Resources Defense Council, told Climate Home News the carbon neutrality goal was “a big and good surprise” which was “nowhere in the picture” in the run-up to the Cop26 summit.

“Announcing the target is a good start but a lot more needs to be done on implementation and hopefully that will follow,” she said.

Indian climate analysts told Climate Home the announcement marked a clear increase in ambition. However, they agreed clarification was needed on some of the targets, including on a goal for India to “fulfil 50% of its energy requirements from renewable energy sources by 2030”.

“Reaching 50% of renewable energy by 2030 is not possible,” said Swati D’Souza, research lead for climate action at the National Foundation for India. She suggested Modi misspoke and that the target is designed for electricity generation rather than energy.

On reaching 2070 net zero emissions, D’Souza said: “If that’s the ambition, it’s time for India to act on coal mine closures. The time is here and the time is now,” she said, adding that coal regions have historically taken 40-50 years to phase out the fossil fuel.

Experts Climate Home News spoke to agreed that generating half of the country’s electricity by 2030 is the most ambitious goal.

One Indian official in Glasgow told Climate Home News: “we don’t just set distant targets, we deliver them,” adding that the country “will punch above its weight”.

The pledges made by Modi are expected to be formalised in a nationally determined contribution (NDC) to be submitted to the United Nations soon.

There has been significant diplomatic pressure on Modi to raise India’s ambition at the summit. But Delhi has been resisting increasing its climate plan until now, calling for financial help and technological support to accelerate its climate ambition.

In his Cop26 speech, Modi said that this increase in ambition should be matched by increases in climate finance and the transfer of low-carbon technologies from developed countries to developing countries.

He said he expects wealthy countries to make $1trillion available as soon as possible. “India understands and shares the pain of other developing countries,” Modi said.

Rich countries promised in 2009 to collectively mobilise $100bn a year in climate finance by 2020, but are not on track to meet the milestone until 2023.

“India has clearly put the ball in the court of the developed world. This is real climate action,” said Arunabha Ghosh, head of the New Delhi-based Council on Energy, Environment and Water (CEEW). “Now, India demands $1 trillion of climate finance as soon as possible and will monitor not just climate action, but delivered climate finance.”

According to CEEW analysis, India needs 5,900GW of solar power to achieve net zero by 2050.

In recent months, India has been involved in a number of initiatives to boost its renewable energy roll out. These include a partnership with the US to accelerate the deployment of clean energy.

On Tuesday, Modi is due to join prime minister Boris Johnson in announcing a green grids initiative to accelerate the integration of solar and wind power on international grids by connecting energy-rich locations such as sunny deserts and windy coastlines with urban centres.

The initiative will be coordinated by a ministerial steering group including France, India, the United Kingdom and the United States.

Government spokesperson Asif Bhamla said the initiative aimed to “connect the world’s solar energy via one grid” as “critical” for India to accelerate its clean energy transition.