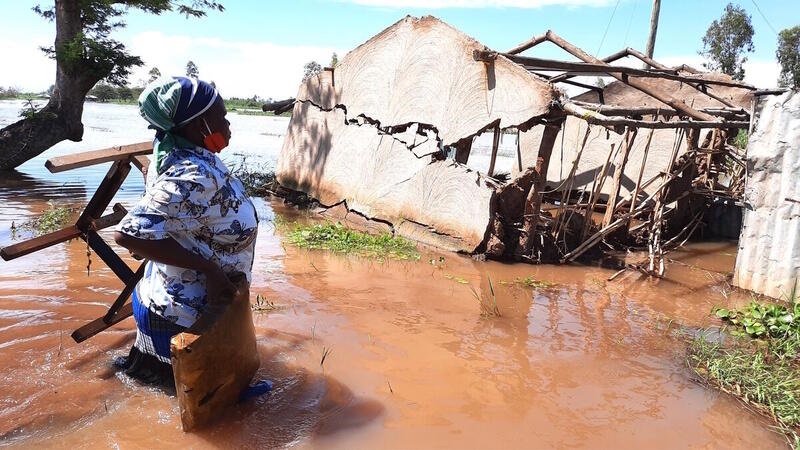 A woman looks at her flooding home in Kenya in 2020 (Photo: Bernard Ojwang / Greenpeace)

The Scottish government has pledged £1 million ($1.4m) to support the victims of climate disaster, in a world first that representatives of vulnerable countries hope will inspire others to follow.

At Cop26 on Monday, Scotland’s leader Nicola Sturgeon said her government would partner with the Climate Justice Resilience Fund to “address loss and damage” caused by climate change. This was backed by £1m ($1.4m) investment in helping the world’s most vulnerable communities repair and rebuild after climate disasters like floods and wildfires.

Under the Paris Agreement, all countries agreed to address the “loss and damage associated with climate change impacts”. But rich countries have fiercely resisted providing specific finance for this as they do not want to accept liability and risk being sued by climate vulnerable nations.

Sonam Wangdi, of Bhutan, who chairs a group of 46 least developed countries (LDCs), told Climate Home News the group was “very happy” about the announcement from the Scottish government.

“I believe that this seed money that the Scottish Government is making [available] is in the right direction. I think it paves the way for the LDCs. It should be very clear that they should be separate funds for loss and damage” on top of existing climate aid.

“When the limits of adaptation have been reached, there is nothing we can do and our people suffer,” he said.

Climate Action Network International senior adviser Harjeet Singh said: “[The Scottish government] have broken the taboo and they have shown the leadership that other rich countries should have shown long ago.”

“Countries doing that bilaterally would send a very strong signal that would basically legitimise the need for loss and damage finance,” said Zoha Shawoo, an associate scientist at the Stockholm Environment Institute.

“@ScotGov’s commitment to #lossanddamage sends a message to other developed countries to step up. Those most vulnerable and least responsible for the #climatecrisis are bearing the brunt of these damages. This is the fundamental injustice.” @TasneemEssop @CANIntl #COP26 pic.twitter.com/OVX8KJJSxe

But the sum of money offered will not go far on its own – and efforts to institutionalise support through the UN climate negotiations are making painfully slow progress.

Campaigners have estimated vulnerable nations need at least $300bn to respond to loss and damage in 2030.

To get to the necessary scale, there needs to be agreement at Cop26 to put money behind the “Santiago Network”, the home of loss and damage action under UN Climate Change, Kaloga said. “What matters is the political will and the political ambition. Now the question is who’s next and how much more?”

The Santiago Network was conceived at the last UN climate talks to work on how to minimise, avoid and recover from loss and damage. Now negotiators are discussing how to put it into action.

Shawoo said that while developing countries want this organisation to have an appropriate budget, staff and a broad remit to provide technical assistance and address climate impacts, richer nations want to limit it to an online platform for exchanging information.

If the collaborative route does not yield results, some vulnerable countries are exploring how to force rich countries to pay up through the courts.

Led by Antigua and Barbuda and Tuvalu, a coalition of small island developing states has launched a commission to examine avenues for litigation.

At Cop26, Antigua and Barbuda’s prime minister Gaston Browne said loss and damage was important to small island states and was not going to be seriously addressed in the conference’s negotiations.

“We are pursuing this issue legally on the basis that he who damages must pay restitution. In other words, the polluter must pay,” he said.

He added that the initiative “is not intended to be an act of aggression” but that in order to get climate justice, small islands must fight on different complementary fronts.

Shawoo said that, when developing countries suffer climate impacts they could sue big historic polluters for compensation. Rich countries who have not met their climate pledges would be particularly vulnerable to these lawsuits, she said. On the other hand, lawsuits may be slow and burdensome for developing countries.

Meanwhile, since Scotland is not a member of the UN, its commitment to the vulnerable nations should encourage other non-state actors to follow suit, said Kaloga.

“The big billionaires of the world can by the same way set a precedent by providing resources to the world’s most vulnerable people,” he said.