Climate adaptation finance has a blind spot on conflict and fragility

Sponsored content: Communities affected by conflict and fragility are increasingly facing climate change threats, yet climate finance is leaving these people behind 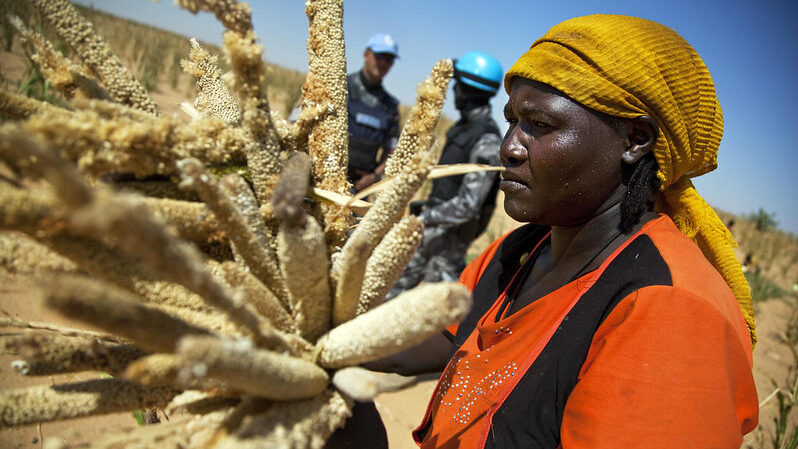 A woman collects millet in a land rented by a community leader in Saluma Area, near El Fasher, Sudan (Photo: United Nations / Flickr)

With the world already 1.1C warmer than pre-industrial times, we know that climate change impacts are deeply felt in communities across the world and adapting to them is deeply important.

Climate adaptation finance is helping many climate-vulnerable regions adapt to the adverse effects of climate change, reduce vulnerability and exposure to current and expected climate impacts, and increase resilience.

But what happens when climate-vulnerable countries are also coping with fragile governance or conflict?

Research from Supporting Pastoralism and Agriculture in Recurrent and Protracted Crises (SPARC) is seeking to understand these dynamics on the ground across the Sahel and Horn of Africa.

Interviews in Mali, for instance, highlighted how climate change is an accelerator of conflict – although not the root cause. In this context, natural resource scarcity due to population growth and land grabbing is being exacerbated by climate change, leading to intercommunal tensions. These tensions are in turn exploited by Jihadists for political or violent conflict purposes. In short, many of these communities are facing a ‘double vulnerability’ of conflict and climate change.

We know that climate adaptation programmes in these contexts can be implemented in a conflict-sensitive manner. Sound principles do exist and good practices have been documented.

However, the new SPARC report finds that few adaptation programmes are accounting for conflict in practice. The study zoomed in on Mali, Sudan and Somalia, where it found limited evidence of systematic conflict analysis in climate adaptation projects.

It also found that multilateral climate funds and bilateral donors tend not to allocate funds in fragile and conflict-affected situations, due to perceived higher risks and challenges. This creates conflict ‘blind spots’ that both increase the risk of poorly-designed adaptation programmes amplifying conflict situations, causing unintended harm, and prevent adaptation finance from reaching those in urgent need of support.

Where is adaptation finance spent?

On a per capita basis, more than half of the countries in the region received less adaptation funding than the average for Least Developed Countries (LDCs), despite sharing similar levels of socioeconomic development but ranking at the top of climate vulnerability indexes. This trend shows that the more fragile a country is, the less adaptation finance it received, supporting the idea that donors tend to favour safer places.

The challenges in accessing adaptation finance, while not unique to fragile and conflict settings, are exacerbated by instability in these places. For instance, the minimum climate information and socio-economic data for climate finance project proposals is often lacking, due to a lack of monitoring infrastructure in conflict areas, or because non-state groups prevent project teams from accessing target areas or communities to collect baseline information.

Existing donor requirements to access climate finance are too complex and rigid for conflict affected countries. They do not seem to account, either, for rapidly-changing contexts of crises and fragility.

There is great scope for improving conflict analyses, conflict-sensitive planning and programme delivery, and increased climate finance in fragile and conflict-affected contexts.

Programmes should involve conflict assessments that diagnose local power dynamics and imbalances, which are at the root of intercommunal conflicts over shared natural-resources. They should move beyond ‘security awareness’ to focus on preventing and mitigating local conflict.

Donors, governments and implementing agencies need to better articulate the climate adaptation and conflict nexus across their strategies, policies and investment guidance.

Local leaders and stakeholders need to actively participate in designing and implementing investments that are inclusive and recognise the heterogeneity of communities. Operational protocols are needed to support responses to unforeseen events, including conflicts.

Improved coordination among donors will be needed, based on risk preferences. The access requirements of multilateral climate funds, such as the Green Climate Fund, could be adapted to fragile and conflict-affected settings.

Parties and observers at COP26 need to elevate the specific requirements of fragile and conflict-affected settings in the discussions.

While the Paris Agreement does not explicitly use the terms ‘fragility’ and ‘conflict’, it stresses capacity building for those countries most vulnerable to climate change, including LDCs and Small Island Developing States (SIDS). Many of these countries are facing the double vulnerability of climate and conflict.

There is an opportunity, therefore, to embed the specific terminology of fragile and conflict-affected settings in discussions in Glasgow, especially in relation to the recently published Climate Finance Delivery Plan to meet the $100 billion goal and the new climate finance goal post-2025. Only then can we hope to reach a point where fragile and conflict-affected settings are enshrined in the UNFCCC process and recognised as having unique needs, much like SIDS and LDCs.

Supporting Pastoralism and Agriculture in Recurrent and Protracted Crises (SPARC) is a research programme which aims to generate evidence and address knowledge gaps to build the resilience of millions of pastoralists, agro-pastoralists and farmers in communities of Africa and the Middle East.

Adriana Quevedo is a Senior Research officer in the Global Risks and Resilience Programme, ODI. Her work supports low carbon development in the agriculture, infrastructure and finance.

This post was sponsored by Supporting Pastoralism and Agriculture in Recurrent and Protracted Crises (SPARC). See our editorial guidelines for what this means.