Sponsored content: Germany, France and the US were among countries announcing new contributions to help vulnerable countries cope with the impacts of the climate crisis 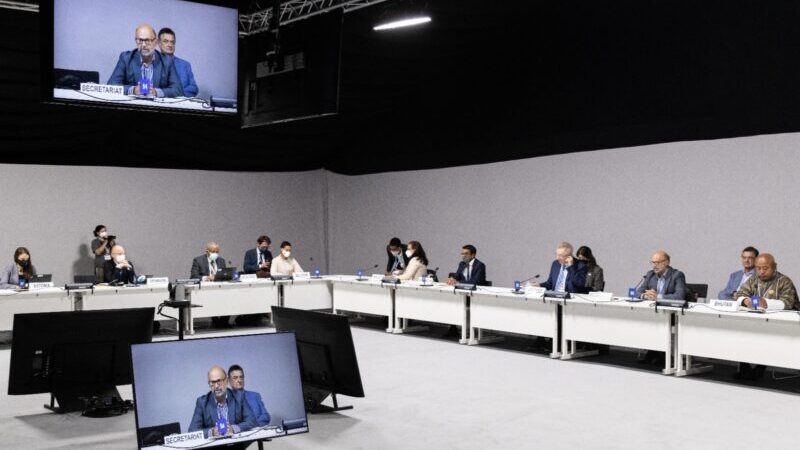 The GEF-run pledging session in the Blue Zone of Cop26 (Photo: RTCC)

Representatives of Belgium, the Belgian region of Walloon, Canada, Denmark, Estonia, France, Germany, Ireland, the Netherlands, Sweden, Switzerland, and the United States were present at a pledging event in the UNFCCC Blue Zone, moderated by Bezos Earth Fund CEO Andrew Steer, where attendees discussed how to enhance timely support for climate adaptation particularly in countries most vulnerable to climate change.

“Adaptation and building resilient societies are needed much more today than ever before,” said Yeshey Penjor, minister of agriculture and forests for Bhutan. “As we continue to address our climate adaptation challenges in LDCs, we are facing a massive resource gap.”

The climate resilience fund, set up in 2001, is managed by the Global Environment Facility (GEF), and exclusively targets the 46 countries identified by the UN as having the biggest development needs.

“I am delighted at the strong show of support to the Least Developed Countries Fund, which stands alone as a source of support to the world’s most vulnerable countries. The pledges made today will make an immediate difference in the places where climate change risks are most acute,” said GEF CEO and chairperson Carlos Manuel Rodriguez. “We need to keep building on this support to close the climate finance gap and meet the Paris Agreement’s goal to increase all countries’ resilience to the very serious challenges that climate change will bring.”

Not all statements, however, were celebratory and some representatives used the pledging session to criticise the slow pace of action.

“Time is running out for us,” said Cambodia’s environment minister Say Samal. “You do not have to be a scientist to see what’s going on in Cambodia,” he added, citing devastating droughts and floods across the region.

Representatives from Germany were similarly critical of the speed of global climate action and pledged the highest figure out of all 12 governments, committing to provide €100 million ($116m) to the LDCF in 2021 alone.

Heike Henn, an official from the German development ministry, acknowledged that rich countries had not met a collective target to mobilise $100 billion a year in climate finance to poorer nations by 2020.

“We have not yet delivered on the $100 billion goal for 2020 and we must become better,” she said. “The consequences of extreme weather events are felt by the most vulnerable countries, even though they have contributed the least to climate change.”

Since its inception 20 years ago, the LDCF has provided $1.7 billion in grants for over 350 projects tailored to the climate adaptation priorities of LDCs, and estimates suggest that more than 50 million people now benefit from the Fund’s work.

“The LDCF has a special place in the hearts of Least Developed Countries, as it is the only climate change adaptation fund that is designed to meet our unique needs and priorities. We are 46 of the world’s most vulnerable countries, and the science indicates that our climate risk exposure will only increase,” said Sonam Phuntsho Wangdi, chair of the LDC Group at the UN climate negotiations.

“Support from the LDCF enables us to take action and prepare for trouble ahead. We are pleased about the generous new contributions to the LDCF announced today and sincerely hope that additional donors will follow suit given how meaningful this source of support is to us.”

This post was sponsored by the Global Environment Facility. See our editorial guidelines for what this means.