The US and EU have resisted calls for finance to the victims of climate disaster, but developing countries say it is a red line 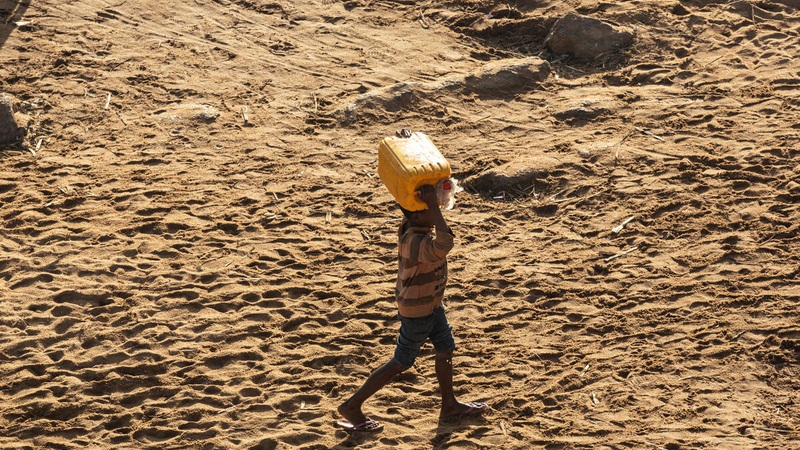 A young boy foraging for water in southern Madagascar, where people are facing famine-like conditions as the region suffers from its most accute drought in four decades (Photo: WFP/Tsiory Andriantsoarana)

The US and vulnerable countries were locked in talks on Friday evening over finance for victims of the climate crisis, as Cop26 went into overtime.

Developing country negotiators said the refusal of the US and EU to provide reparations for those losing their lives, homes and livelihoods to climate change impacts jeopardised a deal in Glasgow, UK.

The UK presidency was carrying out shuttle diplomacy on loss and damage to help find a landing ground.

“It’s going to be a very tough deal to make because it requires painful political decisions from everybody,” one developing county negotiator told Climate Home. “The question is do we have enough political capital now to make a deal?”

The G77 + China, which represents 134 developing countries, has proposed establishing a funding facility to help vulnerable nations respond to the loss and damages inflicted by an overheating climate.

Despite joining a “high ambition coalition” with small island states and vulnerable nations, the US and the EU have opposed the idea. The most they have shown willing to back is technical assistance.

Loss and damage is one of the most political contentious in the climate talks, because it raises the question of historical responsibility in causing the climate crisis. Rich nations have consistently refused to accept liability or calls for compensation.

At a plenary session on Friday, several ministers spoke of the losses their people were suffering already under 1.1C of global warming.

For Kenya, this meant people going hungry because of drought. “We bleed when it rains, we cry when it doesn’t,” Keriako Tobiko told the meeting in Glasgow.

For Bangladesh, it was hundreds of thousands of people displaced by sea level rise, flooding and intense cyclones. For Tuvalu, it was islands sinking.

All argued that the loss and damage facility was necessary for the victims of these disasters, and not, as Tobiko put it, “giving money to consultants to fly around the globe and teach us about what loss and damage is”.

Developing countries want a concrete proposal for financing to be made available to help them recover from disasters. “We won’t be able to get away with constructive ambiguity at this stage. That’s just not going to cut it,” the developing country negotiator said.

The issue crystalises a perceived imbalance in draft Glasgow agreements. Provisions to accelerate emission-cutting plans, the priority of rich countries, were detailed from the start. Language on boosting finance flows and helping communities on the sharp end of climate impacts has been slower to come together.

The latest draft version of the text on Friday morning asked countries to strengthen their 2030 climate plans by the end of 2022 to align with the Paris Agreement goal. It noted “with deep regret” that a target to provide $100 billion by 2020 to support developing countries’ climate action had not been met.

That imbalance prompted some large emerging economies to insist they would set and deliver climate targets in their own time – and no more frequently than the 5-year cycle agreed in Paris.

US special envoy John Kerry told the meeting it was “imperative” that the language on coming back with new plans be preserved to close the gap to limit global heating in line with 1.5C.

His remarks were light on what was needed to close the finance gap, which developing countries said was necessary to unlock greater ambition.

EU green deal chief Frans Timmermans told the plenary: “Loss and damage is a key part of our conversation. It’s time to move and find the solutions that will help vulnerable countries respond to the damage and destruction the climate crisis has already caused. We can find a way out of this, I’m sure, together in a cooperative atmosphere.“

But behind closed doors, sources said the EU had been siding with the US against the creation of a loss and damage finance facility.

Ahmadou Sebory Toure, lead climate negotiator for Guinea, which represents a group of 124 countries and China known as the G77, told Climate Home News the establishment of this facility was a red line for developing countries.

“This is where a deal is to be done,” another developed country negotiator said, adding that the EU had shown weak leadership on the issue.

Wera Mori, Papua New Guinea’s climate minister, stopped the EU’s Timmermans the corridor of the conference. “I pointed out that we need to act together,” Mori told Climate Home.

The sentiment that the EU and the US have not been negotiating in the best interest of vulnerable countries is widespread among developing country negotiators.

“The European Union and the United States, in their role as the largest economies in the High Ambition Coalition, must provide their full diplomatic and financial backing,” to vulnerable countries’ approach, Gamal Hassan, Somalia’s minister for planning and economic development, wrote in an opinion article on Friday.

“I don’t think we are at the stage where we are talking about a new funding mechanism to be created,” Canada’s newly appointed environment minister Steven Guilbeault told a press conference in Glasgow on Friday.

But he added that he thought a number of developed countries were willing to go further than the latest draft text had shown.

While the form it would take was still under negotiation, five philanthropic funds pledged a total of $3 million to the Glasgow Loss and Damage Facility: Children’s Investment Fund Foundation (CIFF), the European Climate Foundation, the Hewlett Foundation, the Open Society Foundations and the Global Green Grants Fund.

This was just the start and must lead to meaningful finance from rich countries, said Kate Hampton of the CIFF in a statement. “The inequity of climate change must be confronted in the final hours of Cop26 and must not be forgotten when the meeting closes. We stand behind all those speaking up for the world’s most climate vulnerable.”