Oil and gas avoided censure in Glasgow for the 26th time. Let’s not make it 27

Investor and state-owned oil companies in the G20 find common cause in watering down climate ambition; we need to confront their influence 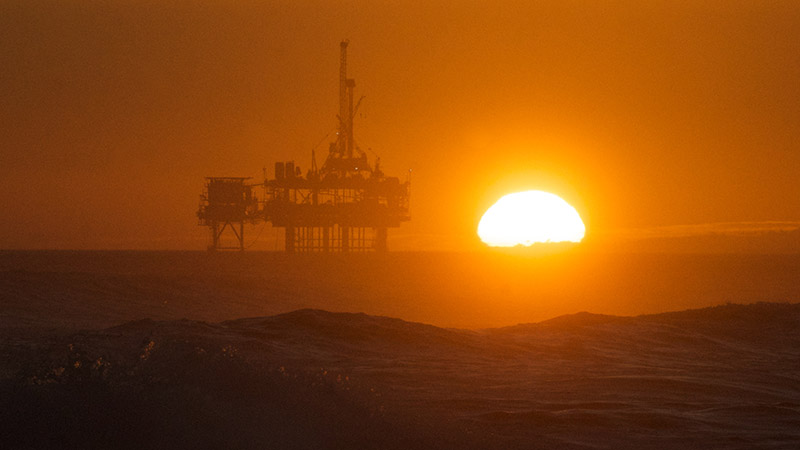 An oil rig off the coast of California (Flickr/ Pete Markham)

The Glasgow Climate Pact struck on Saturday named and shamed coal, in a symbolic first for the UN climate talks. Big coal producers such as India and China resisted but they couldn’t escape the pressure inside (and outside, especially from youth climate strikers).

As Cop26 president the UK was obsessed with getting something on coal at the summit. They were probably hoping it would distract from anyone asking awkward questions about oil and gas, such as why the UK government is legally committed to extracting every last “economic” drop out of the North Sea.

It wasn’t just the UK that was keen to avoid the topic. None of the G20 signed up to join the Beyond Oil and Gas Alliance last week, apart from France which produces very little of the stuff and will continue to import.

So, we have to ask why, after 26 UN climate summits have oil and gas, which between them are responsible for more CO2 emissions than coal, been virtually ignored?

To begin to answer we need to look beyond a Saturday evening in Glasgow in November to what’s going on in the capital cities of G20 countries.

One factor is that while G20 governments increasingly support green technologies, lobbyists have successfully persuaded them to provide:

My own research on the political power of the oil and gas companies – such as BP, Shell, ExxonMobil and Chevron – has highlighted the grip they have on national governments, whom they have lobbied behind the scenes to delay, delay, and then delay some more.

Companies like Saudi Aramco, Shell, Gazprom, BP, China National Petroleum Company and ExxonMobil are in competition but unite around self-interested positions. They jointly operate major infrastructure (for example Gazprom and Shell on Nord Stream 2 or Saudi Aramco and Sinopec on the Yasref refinery in Saudi Arabia) and they lobby together through global, regional and national oil and gas trade associations.

While the differences between investor-owned and state-owned companies are highlighted they are members of the same oil and gas trade associations at the global, regional and national level.

At the national level state-owned companies such as Chinese major CNOOC join ExxonMobil in being members of oil and gas trade associations in Canada, Mexico and Brazil. Shell is a member of Federation of Indian Petroleum Industry and of the China Petroleum and Chemical Industry Federation.

They have a common agenda: to stop national governments phasing out the production and consumption of fossil fuels. And it’s working. They are successfully hiding behind G20 governments’ mostly hollow net zero promises.

Several G20 countries including the United States and Saudi Arabia set up the Net Zero Producers Forum earlier this year, which may have looked like climate action. But there has been little sign of follow-up and it was nowhere to be seen at Cop26.

It helps us understand why these same countries pursue common goals such as when the US and Saudi Arabia lobbied against fully recognising the IPCC’s 2018 report, or recent leaks showing Japan and Australia tried to remove language on reducing fossil fuels.

The way in which language on phasing out coal and fossil fuel subsidies got watered down in Glasgow was just the latest outrageous example.

Perhaps it’s not surprising with over 500 fossil fuel lobbyists attending the Cop26 negotiations, many of them registered under 27 national delegations including the UK, Canada, Russia and Brazil.

To give Cop27 a chance of doing better, we need to confront the G20’s close ties to the oil and gas industry.

Dario Kenner is a visiting research fellow at the University of Sussex and author of Carbon Inequality: The Role of the Richest in Climate Change and White Knights, or horseman of the apocalypse? Prospects for Big Oil to align emissions with a 1.5 degree pathway.