The Polisario Front has released an unofficial climate plan for the Sahrawi people, saying Morocco has built wind and solar farms on their land without consent 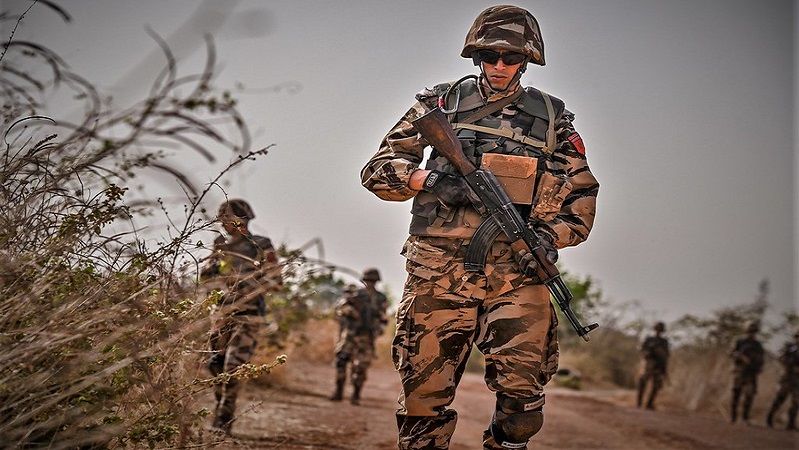 A Moroccan soldier on a training exercise in Senegal (Photo: US Africa Command/Flickr)

The Moroccan government has been accused of using the renewable energy and low emissions of the disputed region of Western Sahara to “greenwash” its climate statistics.

The Polisario Front, which claims to represent the “colonised” people of Western Sahara, has worked with international experts to develop an unofficial national climate plan. As well as outlining the impacts of climate change and what they would do about it if they had the money and power, it criticises Morocco’s use of the area’s resources.

Polisario’s European representative Oubi Bachir presented the plan to Cop26 in Glasgow. Speaking from the Algerian city of Tindouf, where most of the Sahrawi people live as refugees, he told Climate Home News: “Morocco is trying to greenwash its occupation of our land by using those noble and clean mechanisms and tools to try and advance its position on Western Sahara.”

He continued: “Morocco is known to be one of the leading countries, especially in the third world countries, in terms of climate change. But unfortunately, it has been given this position as a leading country because of the illegal force that Morocco is doing inside the occupied territories of Western Sahara.”

The document accuses Morocco of “exploitation” of the Western Sahara’s wind and solar power to reach its goal to get 53% of its energy from renewables by 2030 and to power its phosphate, desalination and airport industries. Bachir said: “Almost 50% of all the energy generated for Morocco [by 2030] will be generated by Western Sahara in the context of occupation.”

The climate plan says: “The development of renewable energy in the Occupied Territory thus supports the personal financial interests of the Moroccan ruling elite, facilitates unsustainable and potentially maladaptive water intensive agriculture, and provides financial returns and potentially energy resources to foreign interests at the expense of the Sahrawi people, and without their consent, contrary to international law.”

A member of the UN Mission for the Referendum in Western Sahara speaks to a family (Photo: UN/Flickr)

The Moroccan environment ministry’s director of climate change, biodiversity and green economy Bouzekri Razi said that only UN members could submit nationally determined contributions, or NDCs, to the Paris Agreement.

“There is no party that bears the name of Western Sahara neither to the Paris agreement or to the UNFCCC convention nor to the UN,” said Razi. “Morocco administers 12 regions including Saharan provinces in the south… the southern provinces of Morocco are experiencing a development program of a total amount of $8bn and which provides for a large number of structuring projects aimed, mainly, at strengthening infrastructure and networks, encouraging private investment, supporting projects relating to human and social development, and promoting culture. And the Moroccan NDC covers the main emitting sectors at the national level including southern provinces.”

Polisario’s UK and Ireland representative Sidi Breika said: “The map that Morocco presents to the UNFCCC is the wrong map…they are cheating the UN, cheating the agencies, cheating the countries which provide them with funds. They’re presenting Morocco with [an] extension… using the emissions of Western Sahara is if they were theirs.”

An acacia tree in the Sahara desert (Photo: Mark Janes/Flickr)

Breika said that the Moroccan occupation of the west of Western Sahara, which includes the coast, has pushed the Sahrawi people to lands which are less hospitable and more effected by climate change.

“East of the [fortified border] wall, it is 99% dry,” he said, “there are still a few acacia trees in the rivers that are still standing but the climate change is seriously having an impact on the territory.”

While Climatic Research Unit (CRU) data referred to in the NDC suggests there has been no long-term, Western Sahara-wide decline in rainfall, Breika said that it had not rained in most parts of Western Sahara for about five or six years.

“It is seriously affecting people,” Breika said. “We used to be historically nomads and that means our people keep looking at the sky and wherever it rains, people go there with their cattle and their belongings looking for the green, for the grass and all that.”

“We have seen that change,” he continued. “The people that are still linked to nomadism, they agree that in the last years there is a serious problem with the rain. They haven’t seen anything like this in the past years. It makes it impossible for them to live.”

While “a few are sticking to their way of life”, many are giving up and moving to the “occupied territories”, the Sahrawi refugee camps in south-west Algeria or to other neighbouring countries.

When the region did last experience rain, it caused severe problems too. In 2015, a few hours of rainfall damaged the homes and food supplies of 5,000 families in the refugee camps in Algeria.

While the rainfall was minimal, the camps were not prepared for it. The desert sand does not suck in the water and the homes are made of mud and brick not concrete. “They don’t tend to build anything strong or solid because there is always this idea of returning home,” Breika said.

Increasing heat is also a problem. Berkeley and CRU data suggests the temperature in Western Sahara is between 1C and 2C higher now than in pre-industrial times. This increase is particularly pronounced in the eastern “liberated” part of Western Sahara.

Breika said that about 60% of Western Saharans in the “liberated” territories and refugee camps have access to mains electricity for air conditioning but the electricity supply is intermittent. Many systems use solar panels and old car batteries and break down often.

The climate plan outlines actions the Polisario Front will take to tackle climate change including by teaching about it in schools, developing early warning systems for floods, heatwaves and dust storms and studying net zero pathways.

However, almost all these actions are dependent on international support. The only unconditional action is the formation of a cross-ministry unit for coordination of action on climate change.