President Xi Jinping promised to share around a quarter of China’s pandemic recovery boost with Africa, more than European and American countries 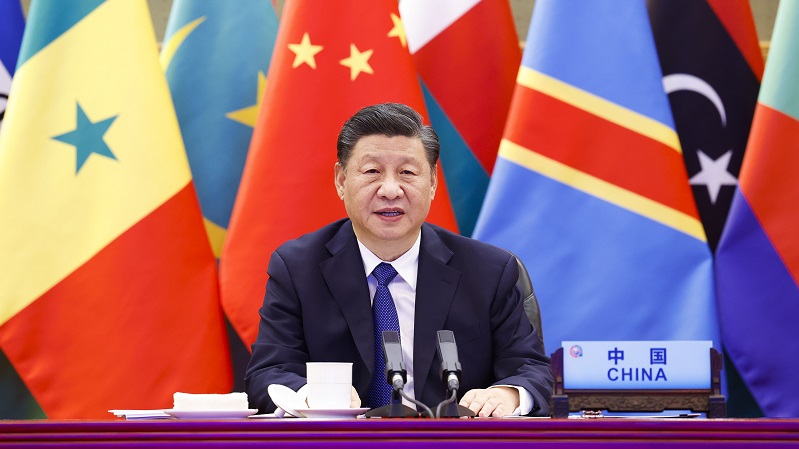 China has “trumped” western countries by pledging to redirect a quarter of its IMF pandemic recovery boost to African countries – more than any other nation.

In his opening speech to the Forum on China-Africa Cooperation (Focac) in Senegal, president Xi Jinping pledged to donate 600 billion doses of Covid-19 vaccines and redistribute $10 billion worth of rare IMF reserve assets, known as special drawing rights (SDRs), to African countries. China’s allocation of 29bn SDRs is worth about $40bn.

SDRs enable countries to borrow at the cheap rates enjoyed by wealthy nations and have been billed as a powerful tool to finance the clean energy transition.

Together, China and Africa “have written a splendid chapter of mutual assistance amidst complex changes, and set a shining example for building a new type of international relations,” Xi told the meeting.

Analysts agreed that while the details matter, the pledge put pressure on other rich nations to show greater solidarity with the developing world.

“It puts pressure on western donors. It will be difficult for advanced economies to justify that they are not in a position to contribute that share when China is able to do it,” Aldo Caliari, of the Jubilee USA Network, an NGO which advocates for debt relief, told Climate Home News.

The IMF injected $650bn  of SDRs into the global economy in August to help countries recover from Covid-19 by buying vaccines, alleviating debt and investing in sustainable development.

By default, SDRs are allocated to countries proportionally to the size of their economy, which means richer nations receive most of the support.

But a global call by IMF boss Kristalina Georgieva for rich nations to voluntarily redistribute the money to those who need it most has won support from the world’s largest economies.

The G20 agreed on a collective goal to redirect $100bn of the money to poor and vulnerable countries – less than a quarter of what they have received.

Earlier this year, France committed to redirect 20% of its SDRs to African countries. Italy and the UK both pledged to return 20% to their allocation to vulnerable low and middle-income economies.

Meanwhile Joe Biden’s administration has asked the US Congress to approve the donation of $21bn of the $113bn it received – around 18.6% of its share, Caliari said.

As Delhi chokes, India’s supreme court is grappling with the air pollution crisis

“It’s impressive that China has trumped OECD countries by coming out with a much larger re-allocation,” he told Climate Home.

He added that the move would put pressure on Japan – China’s close rival – which is yet to announce the share of SDRs it will redistribute, to put a bigger number on the table.

How the money will be distributed and for what purpose is critical.

“To some extent any injection of cash into cash-strapped African economies is going to create some space,” Ronan Palmer, of think tank E3G, told Climate Home.

This could help African countries build their manufacturing capacity for the clean energy transition – or it could mean they continue to import solar panels and other technology from China. And some of the SDRs could go straight back to China as repayment for outstanding debts.

“That would be a very self-serving way for China to use its SDRs – the question is what mechanism will there be to ensure that it benefits the populations,” Caliari said. “But if this is used well and with proper safeguards it could an example for countries to build upon.”

The IMF is developing a Resilience and Sustainability Trust to redistribute the SDRs from rich to poorer countries along with policy support to manage macro-economic climate risks. But experts were sceptical that China would choose that route.

Caliari said using IMF trusts to channel funds to Africa would be difficult because none of them have a regional component. Instead, eligibility is determined by levels of income.

Other options include using a World Bank fund, the Green Climate Fund, the Adaptation Fund  or even to bilaterally transfer the cash directly to African countries’ central banks.

For Hannah Ryder, the Kenyan CEO of Beijing-based consultancy Development Reimagined, the money should ideally be re-distributed through African-owned institutions such as the African Development Bank or a planned African Monetary Fund.

“It would give African nations the independence to manage it on their own,” she said, adding that going through the IMF should be an option of “last resort” because of fund’s record of imposing onerous conditions.

“$10bn is not massively transformative but it sets a precedent for what other international partners can be doing,” Ryder said.