Under a proposed reform of the EU gas market, the industry gets to propose new gas and hydrogen infrastructure projects across the bloc 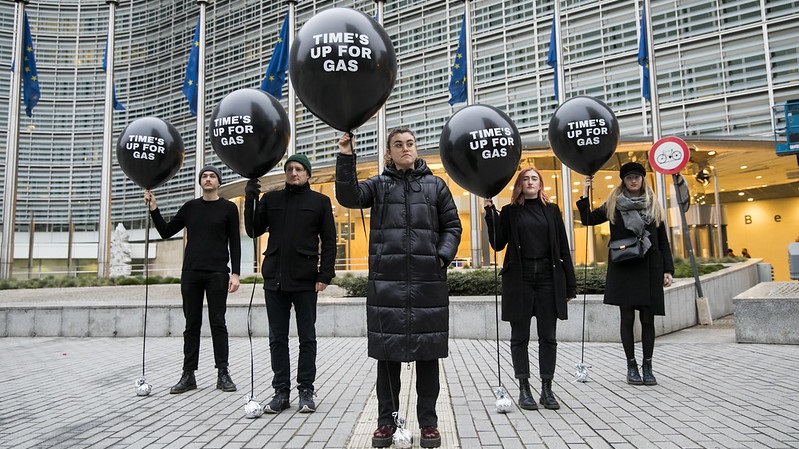 Friends of the Earth activists outside the European Commission on Tuesday, demanding the EU 'burst the gas bubble' (Photo: FoE Europe / Laure Geerts/Flickr)

The gas industry is set to continue to dominate EU decision-making on energy infrastructure, under a proposed reform of the EU gas market published by the European Commission on Wednesday.

Brussels unveiled part two of a legislative overhaul to cut the bloc’s emissions by at least 55% between 1990 and 2030 and put it on track for 2050 climate neutrality.

The package of proposals includes a reform of EU gas market aimed at integrating low-carbon gases such as hydrogen into the network. It creates a new market and governance structure for hydrogen, requires oil and gas operators to find and fix methane leaks, and bans venting and flaring of greenhouse gases.

“Today’s proposals are designed to make sure that the role of natural gas in our energy system declines and that greener options like renewables, hydrogen, biomass and biogas increase,” EU energy commissioner Kadri Simson told a press conference.

But the gas industry gets a central role in deciding the future of the EU’s energy infrastructure, raising concerns about locking in polluting systems.

“This package was crucial to accelerate the transition towards a decarbonised energy system. Yet the Commission has ceded ground to industry polluters, giving them a chance to greenwash their fossil business and emissions,” said Patrick ten Brink, director of EU policy at the European Environmental Bureau.

The Commission’s impact assessment for cutting emissions this decade found that gas consumption should reduce 32-37% between 2015 and 2030.

Under the proposal, gas network operators are being asked to include information about infrastructure that can be decommissioned or repurposed. But the plan doesn’t include targets or milestones to end gas exploitation and downsize the infrastructure.

Simson said the plan “ensures a progressive phase out of fossil gas” but didn’t respond to questions from reporters about how much the share of gas would be decreased this decade.

Instead, she said stranded gas assets will be avoided by ensuring that deployment plans are based on a joint demand scenario for electricity, gas and hydrogen. Long-term contracts to import gas into the EU will not be extended beyond 2049 – a year before the EU is due to reach net zero emissions.

The proposal still needs to be discussed and agreed by member states and the Parliament.

“A gas package that fails to deliver a phase out of fossil fuels is simply further hypocrisy in the face of a climate emergency that much of Europe is historically responsible for,” said Eilidh Robb, a campaigner at Friends of the Earth Europe.

Last month, The European Commission included an estimated €13 billion ($15bn) worth of gas projects in its list of priority infrastructure projects.

The proposed reform sees the gas industry retain a central role in deciding where and how to develop the EU’s gas infrastructure.

The European Network of Transmission System Operators for Gas, an industry body for national and regional grid operators, is tasked with proposing lists of gas pipelines and terminals that should be built over a 10-year period.

“The control that the gas industry has on decision-making for infrastructure across Europe has not changed,” said Robb. “If you continue to let the industry set the agenda, then you are going to continue to have gas.”

The structures of a new governance system for the hydrogen market have been modelled on that for gas. The European Network of Network Operators for Hydrogen will promote a dedicated hydrogen infrastructure and the construction of cross-border networks. There are no plans to introduce independent checks or engage a broader range of stakeholders in the process.

“It’s hard to see how this hydrogen network is not going to be completely decided by gas operators because there are dominating the sector at the moment,” said Hanoteaux.

“The EU is lacking overall cohesion on gas. The package is suggesting gas is on its way out but will be replaced by low-carbon gases which is problematic because it means the EU will still use gas and gas infrastructure for a long time,” he said.

Campaigners say these governance structures enshrine gas into Europe’s energy future, with the gas industry able to inflate the demand for hydrogen to justify the continued use of the fossil fuel to produce it.

The proposal allows for blending up to 5% of hydrogen into the gas supply – a practice which Hanoteaux said wastes scarce hydrogen that should be used to help decarbonise the most hard-to-abate sectors.