From how Indonesia treats its Elon Musks to the aftermath of “unimaginable” flooding in Germany, here’s our pick of Climate Home’s best reporting this year 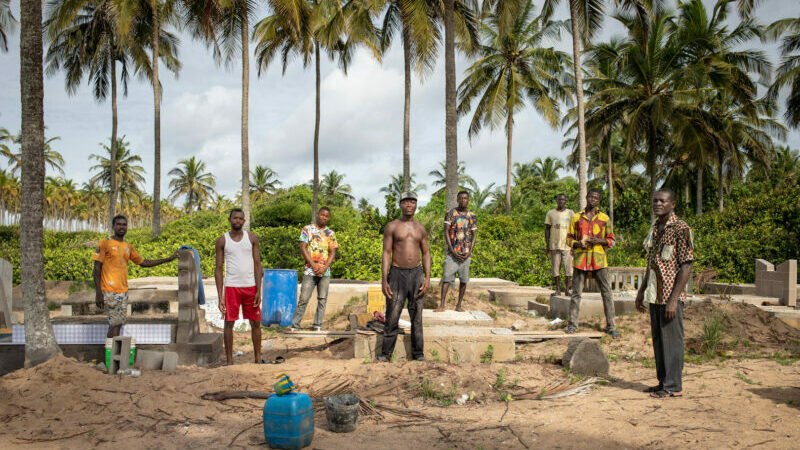 Gravediggers in the cemetery of Lahou-Kpanda, Ivory Coast. Relocating bodies has become a source of income for the burial team. (Photo: Alejandra Loreto)

After a 2020 in which the Covid-19 pandemic squeezed out other news, climate coverage was back with a bang in 2021 with a northern summer of disaster leading up to Cop26, the most hyped climate summit since Copenhagen and the most important since Paris.

At Climate Home News, we covered all the big news – the summits, the targets, the elections, the weather extremes. We also spent time digging out the lesser-known tales and the real stories behind the headlines.

Here are nine examples spanning five continents (sorry Antarctica). To stay up to date with our work, subscribe to our weekly or premium newsletters and, to help us fund it, please consider becoming a supporter.

1. Angola’s oil dependency thwarts its exit from the group of poorest nations

As the year began, officials in Angola were panicking as they were just weeks away from graduating from the least developed countries group.

That’s usually a cause for celebration. Chloé Farand explained why – with the oil price crashing – the country couldn’t afford to lose the special treatment which being in the world’s poorest countries’ club brings.

While oil has brought wealth to the country, that wealth hasn’t been widely distributed and social indicators remain much lower than countries like Tunisia with similar income levels.

2. Green Climate Fund whistleblowers urge US to take its money elsewhere – until ‘toxic’ workplace is fixed

With the US returning to the climate fold this year, we’ve covered the debate on how much money they should give to developing countries’ climate efforts.

But it’s not just the amount that’s important, it’s how it is delivered. In March, our editor Megan Darby got hold of documents which suggested that staff at the UN’s flagship Green Climate Fund were deeply unhappy with its leadership.

Unless there was urgent reform, whistleblowers told Climate Home News, the US’ money would be better directed elsewhere. Campaigners, though, called for engagement rather than divestment. President Joe Biden agreed to stump up $1.2 billion for starters.

Lightning over the city of Songdo, South Korea, where the Green Climate Fund is headquartered (Photo: Soonye Yoon/World Meterological Organisation/Flickr)

3. With Indonesia’s answer to Elon Musk in jail, electric vehicles are going nowhere

Ten years ago, a charismatic minister and a talented engineer made it their mission to clean up Indonesia’s dirty air by developing a cheap, homegrown electric car. But it did not go according to plan.

First, the minister crashed one electric sports car into a cliff on a test drive. Then the engineer got seven years in prison for wasting state money, after his car was judged not fit for the road.

Now, engineers are understandably terrified of taking state money to research electric vehicles and, with Teslas and Nissan Leafs out of most Indonesians’ budgets, the country’s cars are as polluting as ever.

4. Lost to sea: The Ivory Coast villagers saving their ancestors from rising waves

In May, Ingrid Gercama and Alejandra Loreto went to the Ivory Coast as part of our climate justice reporting programme and met fishing villagers trying to save their dead ancestors from coastal flooding, which is caused by a mix of climate change and mangrove deforestation.

The opening quote, “we have to dig up my mother… if we don’t, the sea will take her”, certainly brings those sea-level rise studies to life.

After asking for permission and apologising to their ancestors, Avit and his cousin place the body of his mother in her new grave. Photo: Alejandra Loreto

In July, a photo of the sea on fire in the Gulf of Mexico went viral, becoming an emblem of all that is wrong with the global economy’s dependence on fossil fuels.

Isabelle Gerretsen looked at the story behind the image. She investigated Pemex, the Mexican state-owned company responsible for the underwater gas leak and Exim Bank, the US export credit agency which has given billions of dollars to the company over the last 23 years.

Campaigners wanted an investigation into the leak, she found, and thought they had a better chance with Exim than with Pemex. Five months on, there is no sign of an investigation. Friends of the Earth’s Kate De Angelis said: “Given that Exim is currently considering more support for Pemex, I would assume that they were not very concerned by the fire.”

Ships attempt to put out a blaze in the Gulf of Mexico, which oil company Pemex said was fuelled by a ruptured gas pipeline (Pic: Screenshot/Liam Young/Twitter)

6. As the Taliban seizes control of Afghanistan, coal is a key source of revenue

In August, the Taliban swept through Afghanistan, prompting government officials, translators, activists and journalists to flee in fear of their lives. At the same time, a prolonged drought was leaving Afghans hungry and worsening the instability.

Chloé Farand spoke to the country’s climate negotiator Samim Hoshmand, who escaped to Tajikistan, and reported on how coal mining had financed the Taliban’s takeover.

7. The lesson from German floods: prepare for the unimaginable

It was a summer of tragedy in the Northern Hemisphere as even the rich countries faced climate catastrophe.

Canada and the US north-west sweltered and burned, flooding drowned commuters on a Chinese subway carriage and over 200 people were killed by floods in the heart of Europe.

Marlene Jacobsen travelled to a flood-hit town in Germany and heard how 12 disabled care home residents drowned while trapped in their flooded rooms. She asked why the accurate, timely and terrifying weather forecasts weren’t acted upon.

A month after floods swept through Sinzig, Germany, wrecked furniture and rubble is piled high in the streets (Pic: Marlene Jacobsen)

Coverage of the final day of Cop26 focused on India and China’s last-minute watering down of coal language. But earlier that day other issues had threatened to scupper the Glasgow Pact.

One was a developed-developing split on funding for poorer countries to adapt to the effects of climate change. That ended with Africa settling for US and EU promises.

The other was a niche issue – whether to automatically include UN forestry projects in carbon markets.

Papua New Guinea’s negotiator, a Manhattan lawyer called Kevin Conrad, threatened to block the deal over this, sparking panic which reached all the way to the UN secretary-general in New York.

9. Mia Mottley: the ‘fearless’ leader pushing a global settlement for the climate frontlines

At Cop26 and throughout 2021, no leader punched above their weight more than Barbados’s Mia Mottley.

As well as navigating a Covid-induced tourism downturn, the Caribbean nation’s first female leader has made her country a republic and found time to advocate for an overhaul of the international climate finance architecture.

Chloé Farand spoke to people who work with her about Mottley’s campaign for debt relief and climate finance for all developing countries.