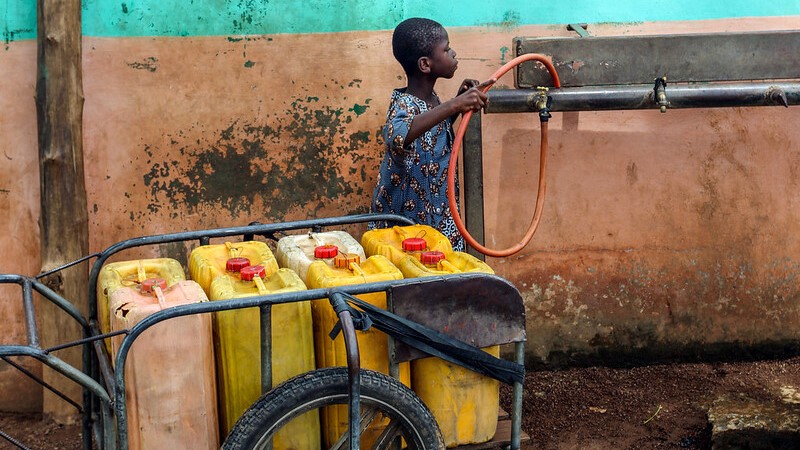 A child looking for water in a rural area of Benin during a drought (Photo: UNDP Benin /Flickr)

While the world is heading towards severe and unavoidable climate impacts if global temperatures continue to rise, progress on support for those on the climate frontlines has been slow and incremental.

Existing levels of warming have already set in motion irreversible changes, such as sea level rise. Money and policy is needed for people to cope in an overheated world.

2022 offers a real opportunity to put climate justice and solidarity at the forefront of international efforts.

The next UN climate talks will take place on the African continent and the host Egypt aims to spotlight adaptation and resilience – the top climate priority for many African nations. The summit could be a moment to elevate millions of often suppressed African voices.

A major scientific report by the Intergovernmental Panel on Climate Change on impacts due in February will give the Egyptian presidency plenty of material to guide the Sharm el-Sheikh climate conference.

No agreement is likely to fly without meaningful progress on finance, including the overdue $100 billion promise, a doubling of adaptation finance and negotiations towards the next long-term goal.

Equity runs as a thread runs through major policy debates this year: scrutiny over net zero pledges, debt relief and the implementation of global biodiversity goals.

This week, there were the first signs of potential support for least developed countries to clean up their polluting industries under the EU’s carbon border tax strategy. But the proposal would only reach a small proportion of trading partners and has a long way to go before being adopted.

Meanwhile, the virulent spread of the Omicron variant is a stark reminder of the ongoing disparity in access to Covid vaccines between rich and poor. As of early January, less than 1% of vaccines administered went into arms in low-income nations. Sharing jabs will be critical to curb infections and allow developing countries the policy and fiscal space for climate action.