The Kuwait Petroleum Corporation, Shell and ExxonMobil are among those pursuing high cost oil projects that won’t pay off in a 1.8C world 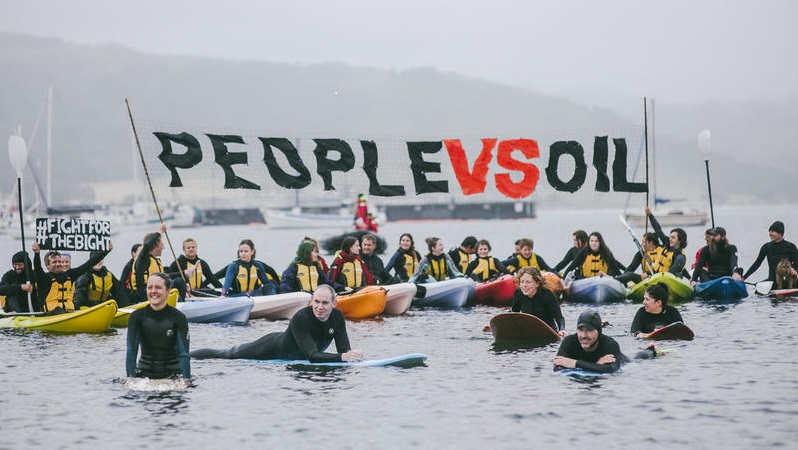 Fossil fuel firms are gambling on global warming going unchecked and the price of oil remaining high, a Carbon Tracker analysis has claimed.

The analysis says that, if the goals of the Paris Agreement are met then many oil exploration projects will not deliver the returns that their investors are expecting.

It names five projects which are particularly dependent on climate failure – although report author and former BP geologist Mike Coffin told Climate Home News they were just five of thousands.

They are the expansion of the Lower Fars heavy oil in Kuwait, Shell and ExxonMobil’s Bosi field in Nigeria, Petrobras’s Tupi and ExxonMobil and Equinor’s Bacalhau projects in Brazil and the Ichalkil Full project in Mexico.

Four of the five are offshore as these projects tend to be larger and therefore more expensive and time-consuming to build. They all require an oil price of above $50 a barrel to break even.

Oil and gas analyst Axel Dalman is the report’s lead author. He said: “Companies may see high prices as a huge neon sign pointing towards investment in more supply. However, this could become a nightmare scenario if they go ahead with projects which deliver oil around the time that demand starts to decline. Shareholders could face catastrophic levels of value destruction as prices fall.”

The report says that the current high oil price of around $90 a barrel will not last as the world’s transition towards clean energy, particularly for vehicles, lowers demand for oil.

In a 1.8C warming scenario, oil demand will peak and then fall rapidly. To maximise their profits, Carbon Tracker said fossil fuel firms should only meet the rising demand with shale projects, which deliver faster.

To limit global warming to the strongest target in the Paris Agreement of 1.5C, the International Energy Agency has said that there is no room for any new oil and gas production (including shale).

Even if the world reduces oil demand and the projects disappoint investors, Coffin told Climate Home News that many will continue anyway because, with so much money already spent, the remaining costs will be covered by revenue.

Of the five projects, the most expensive is state-owned Kuwait Petroleum Corporation’s Lower Fars project, at $7.5 billion. It’s part of the huge onshore Ratqa field in the north of Kuwait.

To make 10% returns on their investments, the default rate of industry analyst Rystad, the project needs the price of oil to be in the high $50s. That means a huge demand for oil, incompatible with the world meeting its climate targets.

Chatham House Gulf analyst Glada Lahn told Climate Home News: “Projects like this gamble on a desperate world in which oil may trade for higher prices as hope of reining in climate change is lost. No sensible investor should be banking on a future for heavy oil.”

This project is particularly “horrendous” from an environmental as well as economic perspective, she said, because it requires high levels of energy and water to get the oil out of the ground and to turn it to a liquid so that it can be transported.

Kuwait is a member of the oil-producing countries’ club OPEC, which does not expect oil demand to peak until the late 2030s. “This is why development in oil production is going on,” said Aisha Al-Sarihi, research fellow at the National University of Singapore who has worked on climate policy in several Gulf countries.

Kuwait has what claims to be the world’s first sovereign wealth fund, which invests oil wealth in a range of international sectors to enable “future generations to face the uncertainties ahead with greater confidence”.

“Now it urgently needs to invest in transition domestically,” said Lahn. “That $7.5bn could far more beneficially be spent on efficiency and climate resilience.”

Kuwait has suffered increasingly from heatwaves, water shortages, dust storms, sand storms and rising sea levels. According to its government’s latest climate plan, these are all made worse by climate change.

Al-Sarihi said Kuwait should use its oil revenues to invest in economic diversification, renewables and hydrogen. If the returns on the Lower Fars project are low, Kuwaiti people will suffer as the government will have less oil revenue to spend, she said.

But, according to Chukwumerije Okereke, a Nigerian professor in environment and development at Reading University, fossil fuel firms pulling out of these projects will also cause problems.

While Nigeria is vulnerable to climate change, it also relies on oil economically. Oil and gas accounts for up to 86% of Nigeria’s foreign exchange revenues. Nigeria’s poverty rate is 40%, four times higher than the global average.

Shell and ExxonMobil have said they will develop the Bosi offshore oil field. Carbon Tracker finds the project needs $6.7bn in capital expenditure, won’t start pumping oil until 2029 and needs an oil price in the high $50s per barrel.

Shell has promised to reduce its oil production 1-2% a year and focus on “value over volumes”, making it more cautious about taking on expensive or contentious projects. If it pulls out, Nigerian taxpayers and workers could suffer.

Okereke said: “Oil exploration is a major source of climate pollution in Nigeria but also, at least for now, the lifeline of Nigeria’s economy. The situation in Nigeria now is grave. Nigeria is between the devil and the deep blue sea with regards to stranded assets in particular and climate change in general.”

As well as the economics of the global energy transition reported on by Carbon Tracker, Okereje said that local factors like insecurity and environmental degradation were making oil companies “rethink their commitment to oil drilling in Nigeria”.

“It is sad that the poor will be the most impacted by the loss of jobs associated with unplanned energy transition in Nigeria,” he said.