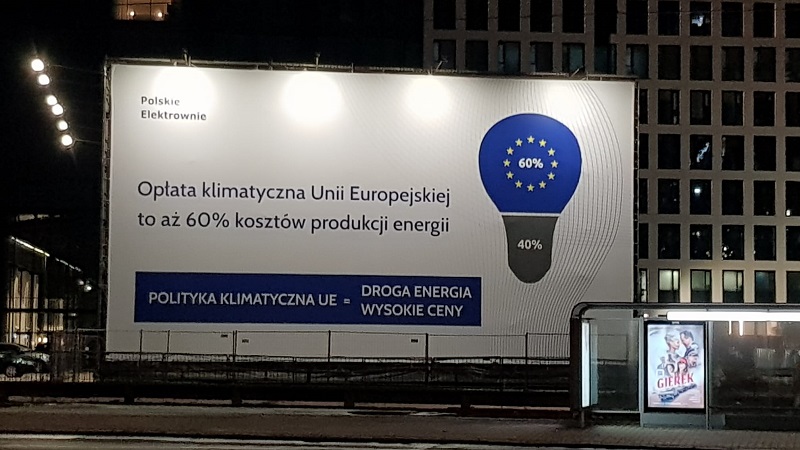 A billboard near Warsaw's central station blames the EU for the price rise (Photo: Ilona Jedrasik/ClientEarth)

On billboards and newspapers across Poland, the TGPE trade association attacked climate policies using a figure widely criticised by experts as misleading.

The message reads: “The European Union’s climate tax is as much as 60% of energy production costs. EU climate politics = expensive energy/high prices”.

It has been amplified by the nationalist government and many of its anti-EU supporters, provoking a rebuttal from the European Commission.

In an article for Euractiv, prime minister Mateusz Morawiecki wrote: “The [ETS] price increase is out of control and hitting the household budgets of EU citizens.”

The Polish parliament called for the EU to suspend and reform the ETS.

Conservative journalist Tomasz Sommer tweeted: “Green anti-Polish lobbying has led to the energy poverty of many Poles. Why did no one stop these people?”

Energy analysts accused government of misleading the public and energy companies of trying to pass the buck for rising energy prices.

While the price of a carbon allowance for polluting power generators on the EU ETS tripled in 2021, think-tank Forum Energii said that cost makes up 23% not 60% of a household bill. It would be less if the country had moved faster from coal to renewables.

Robert Tomaszewski, energy analyst at Polityka Insight, said: “The utilities, I think they just want to move the blame from them and from the government and push it to the European Union.”

Energy prices have shot up in Poland and across Europe, causing widespread hardship. “I’m turning off lights after my children and thinking about changing bulbs,” said Tomaszewski.

“We all feel there is an energy crisis which has been building up for several months. It’s difficult not to see it and difficult not to be a part of it,” said Warsaw-based energy analyst Zofia Wetmanska.

Wetmanska said the 60% figure was not incorrect as that is the cost faced by coal generators but was “very misleading” to imply it was the main driver of high prices. She said: “It is placed out of context and the end user cannot be expected to understand all the technicalities.”

European Commission vice-president and climate lead Frans Timmermans wrote an article for Polish website Onet which opened (in Polish): “Let’s be clear: EU policy is NOT responsible for 60% of your energy bill. Some people use such a number, distorting the meaning of the discussion.”

The price of an EU carbon permit in euros (Photo: Trading Economics)

The emissions trading scheme was set up in 2005. While Poland has developed a renewable energy sector, led by wind, it still relied on coal for 71% of electricity in 2021 – the most of any EU country.

As coal is the most polluting fuel, Poland’s energy consumers have to proportionally pay the most to the ETS.

“It’s lack of preparedness”, said Wetmanska. “All the predictions said that these prices will increase and yet the government did nothing to decarbonise the sector.”

The Law and Justice party won elections in 2015 promising to defend the coal mining region of Silesia.

In government, Tomaszewski said, governing politicians watered down this coal commitment “when they met reality” but have restricted the growth of the onshore wind industry.

“Using only half of this amount, the Polish government could grant, last year, almost 8,000 zlotys ($2,000) to every Polish family that cannot make ends meet,” the Dutchman said.

The government has spent money reducing bills through its “anti inflation shield” policies but it has not linked this to the ETS funds which go into its general budget.

Tomaszewski warned that, in Poland and elsewhere, if energy transition costs ordinary people money then “populist politicans will be able to weaponize this in a way that can transform the policy of the European Union”.

He added that the EU’s goal to reduce emissions by 55% by 2030 could lead to a further war of words between Warsaw and Brussels. “This is the real risk we are facing,” he said.