The case could set an international precedent for indigenous people to control resources on their land, which they say is critical to climate action 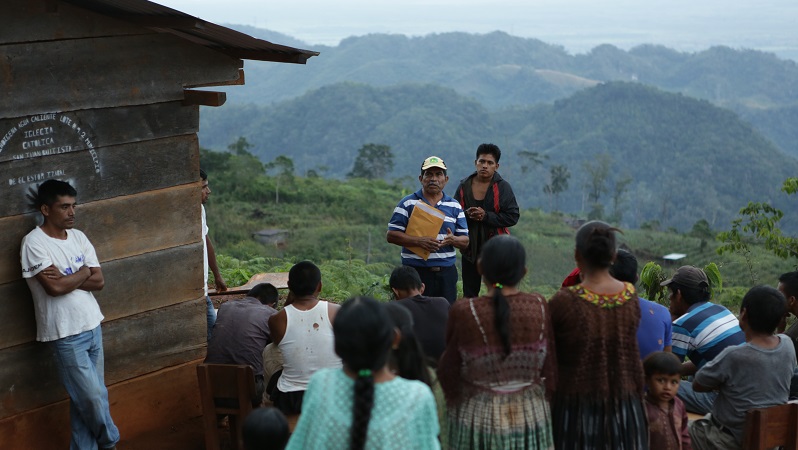 Rodrigo Tot, an indigenous leader in the Guatemala community of Agua Caliente, talks to the Q’eqchi’ about their right to land and resources (Photo: Goldman Environmnental Prize)

A Mayan community in Guatemala is taking the government to court in a case that could recognise the right of indigenous peoples to control oil, gas and mining resources on their land.

The Q’eqchi’ community of Agua Caliente is demanding the Inter-American Court of Human Rights voids the permits of an open-pit nickel mine, in the town of El Estor, for which it says it was never consulted.

Under international human rights standards, states have the obligation to consult indigenous communities and obtain their free, prior and informed consent over projects affecting their lands and resources.

But indigenous communities in Latin America have denounced constant violations of this right.

The case is one of a growing number of lawsuits brought by indigenous peoples to compel governments in the region to respect their right to veto extractive projects affecting them.

Lawyers in this suit, which opened last week, are going a step further. They argue that the court should recognise the rights of indigenous people to permanent sovereignty over their natural resources as a principle of public international law.

“We believe consultation is not enough, consent is not enough. But the court has never said anything about the rights of communities to their natural resources,” Leonardo Crippa, an attorney with the Indian Law Resource Center representing the community, told Climate Home News.

If successful, the lawyers argue it could set a “historical” legal precedent for other communities in Latin America and become “fundamental” to advance climate action in the region.

The case comes amid a growing recognition of indigenous peoples’ critical role in addressing the dual climate and biodiversity crisis.

Indigenous people are estimated to protect 80% of global biodiversity. In recent years, a ballooning body of studies has shown that indigenous territories have lower or similar levels of deforestation to other protected areas.

At the Cop26 climate talks, governments recognised “the important role” of indigenous peoples “in addressing and responding to climate change” and agreed “to respect, promote and consider” their rights.

Rodrigo Tot is an indigenous leader in Guatemala’s Agua Caliente, who was awarded the prestigious Goldman Environmental Prize for his efforts to protect his community against mining. He told Climate Home he hoped the case will bring peace to his community, which has lived in fear of intimidation and violence for opposing the mine.

“When it comes to protecting forests, it will not be up to the government who has failed, but to us — this is what we have been fighting for, for the right to continue to protect our lands,” he said.

For Crippa, guaranteeing indigenous people’s sovereignty will further “alleviate extreme poverty” and help meet sustainable development goals by allowing communities to reap the benefits of projects they have agree to.

The case comes hot on the heels of a ruling by the Constitutional Court in Ecuador, the country’s most powerful judiciary body, which called for stronger protection to guarantee the right of indigenous communities to consent to any oil and mining activities affecting their land.

Legal observers say it gives Ecuador one of the most powerful legal precedents in the world on the rights of indigenous peoples right to consent.

They say this deals a blow to Ecuador’s president Guillermo Lasso’s ambition to double the country’s oil production to one millions barrels per day and expand mining activities. Indigenous land covers 70% of the oil and mineral-rich Ecuadorian Amazon.

The court ruled that if an indigenous community refuses a project, the government can still move forward in “exceptional cases” but that “under no circumstances can a project be carried out that generates excessive sacrifices to the collective rights of communities and nature”.

The indigenous rights movement in Ecuador maintains that any oil or project in their ancestral territories taking place against their will implies unreasonable sacrifices, according to NGO Amazon Frontlines.

Last month, a ruptured oil pipeline contaminated water that supplies indigenous communities in a protected area of the Amazon’s rainforest.

“This ruling is monumental. It’s a game-changer in the balance of power between the extractive interests that the state represents and indigenous peoples,” said Brian Parker, of Amazon Frontlines.

The Coca River, which is a source of water for indigenous communites, was contaminated following an oil spill in eastern Ecuador (Photo: Alianza Ceibo/Emilio Bermeo )

Kevin Currey is programme officer at the Ford Foundation, a member of the alliance of governments and private funders that committed to provide $1.7bn to support indigenous advance their land rights by 2025 during the Cop26 talks.

The alliance has committed to fund activities that strengthen and protect indigenous peoples’ land resources rights and “strategic litigation may be one important avenue for securing and defending their rights,” he said.

“These recent cases should be a wake-up call, not just in Ecuador and Guatemala, but around the world that ignoring indigenous rights generates enormous reputational, financial, and legal risks.”

Lawyers in the Guatemala case hope the court decision will push international financiers and investors not to support projects where indigenous peoples’ rights have been violated.

A 2018 study published in the Proceedings of the National Academy of Sciences found that conflict with local communities was costing large-scale mining projects $20 million per week in delayed production.