Under attack: the Ukrainian climate scientist fighting for survival

Svitlana Krakovska had to withdraw from the approval session of the IPCC report as bombs hit Kyiv. She fears for the future of climate science in Ukraine 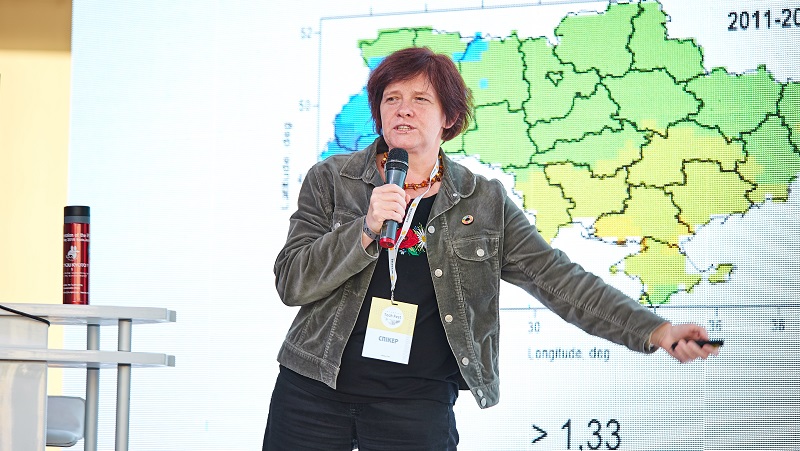 Svitlana Krakovska had hoped that a major scientific report showing that climate change is causing “increasingly irreversible losses” to nature and humanity would dominate headlines across the world this week. Not the existential threat her country is facing.

As Russian tanks rolled into Ukraine and explosions of military artillery resonated across the capital Kyiv on Thursday, “we woke up in a different world,” she told Climate Home News from her flat in the south of the city.

A senior scientist of applied climatology who introduced climate models to Ukraine, Krakovska was leading an 11-strong delegation in the negotiations to approve the “summary for policymakers” that accompanies the Intergovernmental Panel on Climate Change (IPCC) report on climate impacts.

This was the first time Ukraine was represented by such a large delegation, allowing experts to bring their regional perspective from Europe’s largest country (aside from Asia-straddling Russia). “Before, I was alone,” Krakovska said.

As Russian troops advanced towards the capital, the survival of Ukraine as a sovereign state and the completion of the IPCC report both became critical for Krakovska.

“As long as we have internet and no bombs over our head, we will continue to work,” she recalled telling the plenary of the IPCC meeting on Thursday. But the fighting intensified, and when rockets hit the city, the delegation was forced to withdraw from the discussions.

“It is not possible to make science when you are under attack,” she said. “I’m sad that instead of presenting key findings of this report in Ukraine, we need to fight for the existence of our country.”

A mother of four, Krakovska was born in Kyiv and has decided to stay in the city with her family.

A war in Europe in 2022 “is not acceptable” but “we don’t panic, we stay strong,” she said, visibly moved during a Zoom interview.

Krakovska says there is “a very direct connection” between climate change and the war. “Russia has a lot of money from fossil fuels and these fossil fuels make this war possible.”

Issues of water scarcity in eastern and southern Ukraine are also likely to have played a role, she said. Access to water supplies in the Russian-occupied Crimea became a major issue and led to increased concerns of Russian military threats following widespread drought in 2018, 2019 and 2020.

Krakovska said that 10 of the last 12 years had seen below normal precipitation levels. In 2020, water levels in Ukraine’s rivers and reservoirs hit their lowest levels since record began in 1885.

In the regions of Donetsk and Luhansk, where Russian-backed separatist forces have been in conflict with the Ukrainian military since 2014, water woes were exacerbated by shelling and damage to infrastructure.

For Krakovska, Russia’s war on Ukraine shows this can become a cross-border issue.

Revealed: How rich and at-risk nations fought over science of climate impacts

Krakovska knows Russia well. She was born under the Soviet Union, studied meteorology in Saint Petersburg and went on several expeditions to study cloud modelling across Russia.

She joined the Ukrainian Hydrometeorological Institute, where she now heads the applied climatology laboratory, in September 1991, days after Ukraine’s declared its independence from the Soviet Union.

Krakovska first experienced signs of climate change on a trip to the Arctic in October 1991, when mild temperatures meant that the sea still hadn’t frozen as was usual for the time of year.

In the late 1990s, she was one of the first Ukrainian women to travel to Antarctica on a scientific expedition.

A visit to the Max Planck Institute for Meteorology in Hamburg, Germany, took her research in a new direction. There, she met with a group of scientists working on regional climate modelling.

She soon started to work on projections for Ukraine, which have since been used to plan adaptation measures across the country.

Since the invasion started, Krakovska has received dozens of messages of support from the scientific community across the world.

Russian delegate Oleg Anisimov apologised for his country’s invasion of Ukraine during the IPCC approval session’s closing plenary on Sunday – at risk of incurring the wrath of his government.

“The courage of the delegation of Ukraine, which continued to contribute to our deliberations [on Thursday] is remarkable. Science has no borders,” tweeted Climatologist Jean-Pascal van Ypersele, of the Belgian delegation.

But the future of Ukraine and its scientific community are uncertain. Last month, on the anniversary of the 2014 revolution that severed Ukraine’s ties to Russia, Ukrainian scientists wrote in Nature that national science spending remained low, government funding was used inefficiently and low salaries discouraged students from embarking on research careers.

Even that small budget is likely to be redirected to defence – and Krakovska is not complaining.

“We are the poorest country in Europe and we’re really poor scientists if I’m honest,” said Krakovska. “But now I’m really happy that they use this finance to make our army stronger.”

The war is a direct threat to Ukrainian research institutions. In Crimea, those that were previously run by the National Academy of Sciences of Ukraine were transferred to Russian control. Since 2014, the conflict in the east has led 18 universities to relocate to other parts of the country, with many researchers losing their homes and laboratories.

“I hope that we survive and continue to do science as Ukrainian scientists in an independent Ukraine,” Krakovska said.

As our conversation came to a close, she realised she hadn’t checked her phone for warnings to get to a shelter. “I hope that my voice will make a difference,” she added.