Sponsored content: Community initiatives in Kenya and Bangladesh are helping girls to resist the pressures of child marriage and forge their own paths 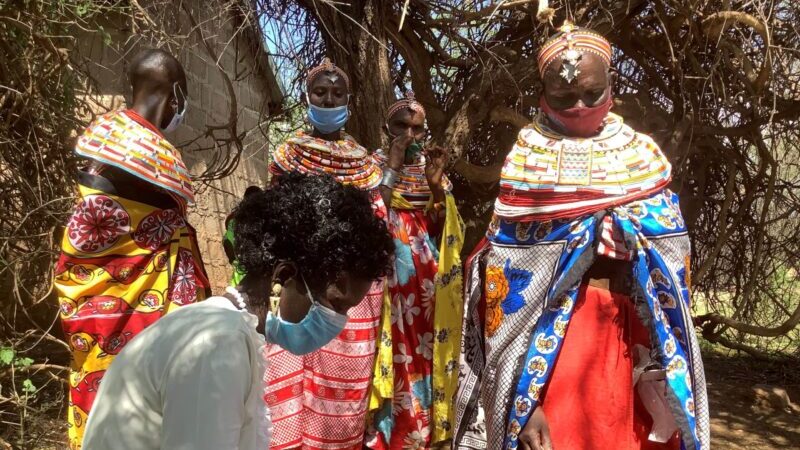 Climate change presents unique challenges for teenage girls, especially in rural places where livelihoods depend on the weather and gender norms are often very traditional.

Around the world, severe weather increasingly threatens the livelihoods and security of communities that rely on farming, fishing, hunting, or herding. When parents are not able to make ends meet, it is common to pull their young daughters from school and marry them off for a dowry. In both Kenya and Bangladesh, the Climate Justice Resilience Fund is supporting organisations that are creating other options for girls and their families.

Divya Sooryakumar leads MADRE’s VIVA Girls Initiative, which provides grants to support community-based, girls-led work that protects girls’ rights and strengthens their roles in social movements. Their programs center on ending gender violence, building a just peace, and advancing climate justice. The VIVA Girls Initiative has a three-prong approach to this, which includes making large and small grants to support community-based, girls-led work; training and providing mentorship to girls; and creating opportunities for girls to advocate for themselves in spaces where decisions are being made about them and their well-being.

“The lived experiences of girls are not included in the conversations around climate change,” said Sooryakumar. “We are very intentional about making sure our resources go directly to young feminist leaders in these communities who can carry out their vision and take their activism forward.”

This intentionality has led to a partnership between MADRE and Indigenous Information Network (IIN) that has lasted more than 20 years. Together, the two groups continue to advance grassroots women’s and girls’ solutions for climate change in Kenya. For example, they support girls’ resilience to their environment through training programs that allow girls to develop strategies to adapt and mitigate the effects of climate change.

“For girls, climate change means that they are given away for marriage, when they are very young,” Executive Director of IIN Lucy Mulenkei explained. “Our program teaches girls about their rights, sexual reproductive health, and climate change.”

IIN and MADRE also train young women to conduct research in communities regarding climate change, as well as take active roles in community climate projects. Girls are becoming active leaders in climate justice, working collectively to identify solutions of climate justice that centre the rights and traditional knowledge of Indigenous women and girls in their communities.

Mulenkei said, “Since this research project started, we’ve seen these women use their skills and knowledge gained from training to help their communities adapt to climate change by planting a certain kind of tree on their farms or sharing knowledge about what kinds of foods to plant.”

In the Maasai Mara section of Kenya, many landowners have organised themselves into conservancies, to manage grasslands to support both wildlife tourism and traditional herding, even as the climate and land begin to change. Unfortunately, women and girls have often been excluded from both livelihoods and often are marginalised in traditional Maasai culture. The Maasai Mara Wildlife Conservancies Association (MMWCA) seeks to change the situation and has instituted measures to support girls’ education, women’s business development, and inclusion of women in running conservancies. But when it comes to the rights of teenage girls, they are having to grapple not only with traditional culture and climate change, but also with the Covid-19 pandemic.

“Covid-19 had the potential of overruling the meaningful impact that MMWCA has made,” explained MMWCA’s Youth and Gender Officer Angela Sanau. “For instance, prolonged school closure meant that children were at home and no longer had the safety of a supervised school environment to socialise. As a result, we saw so many teenage pregnancies. Teenage pregnancies were already on the rise, so you can only image how it was made worse by the pandemic.”

The lack of education and subsequent rise of adolescent pregnancies is also concerning for IIN, especially when Covid-19 first emerged.

“There was a lot of abuse happening, so we tried to prevent teenage pregnancies,” Mulenkei said. “There was also a lot of substance abuse in the community because people were desperate.”

To continue their efforts, IIN relied on women in their network to serve as ambassadors.

“Those women are the ones who were going over to teach the community. They have already gone through the process of learning women’s rights, so it was still possible to get the message out there.” Mulenkei said.

In Bangladesh, climate change is bringing rising seas and flooded terrain, but girls on the coast face similar challenges to girls in Kenya’s drylands.

Syed Aminul Hoque is the director of monitoring, evaluation, and internal audit at The COAST Foundation. COAST works with some of the most climate-vulnerable people in the Bay of Bengal and supports efforts to end domestic violence and early child marriage. Hoque noted increases in child marriage and teen pregnancies are a consequence of Covid protections such as closing labor markets and schools during the pandemic. In fact, he says one international survey points out that up to 10 million more girls will become at risk of becoming child brides because of the pandemic worldwide.

“Our social accountability system was weakened during Covid,” Hoque explained. “Parents were worried about their children and saw marriage as a safer option.”

To combat the rise in child marriage, COAST set up a series of community meetings in 2021. Despite pandemic restrictions, these meetings brought together parents, adolescents, and COAST staff in support of education and development of girls. COAST also opened an informal adolescent school to allow girls whose families could not afford to send them to formal school to continue their education.

Supporting women to build businesses and earn income is another way COAST is shifting gender norms. Hoque says it is all connected – supporting education for adolescent girls and helping women to generate income is how they can gain respect in their communities. “When they have income, they can contribute to the family,” Hoque said. “As a result, respect for women increases.”