The goal is to install 450GW of renewable energy capacity by 2030, more than twice the US’ installed wind and solar generating fleet 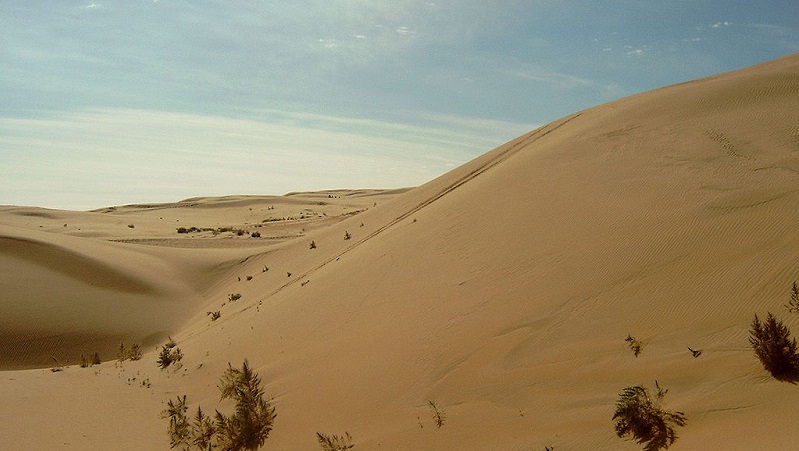 By Joe Lo and Isabelle Gerretsen

China plans to build 450 gigawatts of wind and solar power capacity in the Gobi desert by 2030, government planner He Lifeng said on Saturday.

That’s more than twice the total amount of solar and wind power installed in the USA.

Client Earth’s China representative Dimtri De Boer said: “450GW is really huge. That would be the lion’s share of new solar and wind capacity installation until 2030.”

The scaling up of renewable deployment should be “a major economic boost for China’s underdeveloped western regions,” he said.

Greenpeace East Asia’s Li Shuo said: “This is the positive side of the China climate story. People should get used to big numbers… China’s challenge is how to stop the coal side of the story, which is growing in equally big numbers.”

The Gobi desert straddles China’s northern border with Mongolia. The land is cheap and there is lots of wind and sunshine.

A map of China with the windiest areas in red. (Photo: Global Wind Atlas/Screenshot))

The province of Inner Mongolia, which includes most of China’s Gobi desert, is the biggest producer of coal in China and has pursued a coal-led recovery from the Covid-19 pandemic.

China has brought the costs of manufacturing solar panels down and is able to use these cheap domestic panels in projects like this.

“It only makes sense to deploy domestically made renewable energy equipments in big scale as a way to contribute to climate action as well as economic growth,” Li said.

Similar programmes in the early 2010s were hampered by bottlenecks in the grid infrastructure to deliver the electricity to major cities. This meant renewable producers had to make less electricity than they could have done.

“That problem has largely been solved,” Li said. “Building stuff in China is never a problem.”

Institute for Energy Economics and Financial Analysis analyst Simon Nicholas agreed. He told Climate Home: “China is a world leader in long distance transmission and has been building ultra high voltage direct current transmission lines for years now so if anyone can do it, China can.”

But De Boer warned that transmission would still be costly. Electricity will be lost while being transmitted long distances from the desert to China’s more populated areas.

Around the world, women are putting their lives on the line to defend the climate

New York University Shanghai professor Yifei Li said that maintaining a large solar farm in the desert would be relatively expensive because of the region’s remoteness, the steep difference between day and nighttime temperatures and the high level of dust which reduces panels’ effectiveness.

What to do with the old solar panels when they stop working will become an issue in the future, Yifei Li added.

Li Shuo agreed this would become a “hot topic” in the near future but said “by then, low labor cost, economies of scale, and some of the other factors that enabled the rapid development of the renewable energy industry in the first place will make China a leading performer”.