Nigeria has promised to end gas flaring by 2030 under its national climate plan but communities are sceptical, given previous unmet deadlines 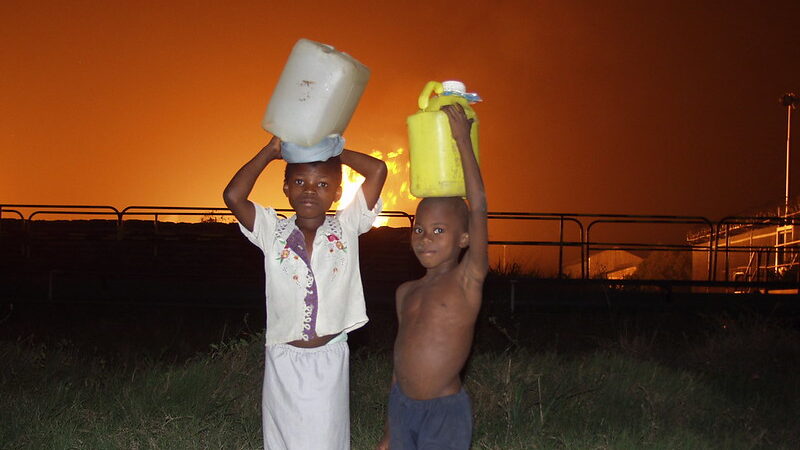 Children stand in front of a gas flare in Niger Delta (Photo: Friends of the Earth International/Flickr)

She ran her hand over the rough patches on the walls of her house, leaving a pattern of dirt, the tell-tale sign of decades of gas flaring that communities in Nigeria’s oil-rich Niger Delta have endured.

Ekaette Robert, who lives in Esit Eket, an oil-rich community in Nigeria’s southern Akwa-Ibom state, has endured great hardships with unbroken optimism in recent years. Over the past seven years, she has experienced the death of her husband, struggled to provide for her five children and now, her livelihood is in danger.

After her husband’s death, Robert started farming cassava to make a living. She rarely makes a profit. Gas flaring – burning off methane as an unwanted byproduct of oil extraction – increases soil temperature, causing a decline in crop yields for Robert and other farmers.

“The yield is very discouraging and it is getting worse by the day. My cassava stems withered and despite applying fertilisers, the problem still persists,” she told Climate Home News. She can only afford to send two of her children to school.

In the nearby village of Ibeno, residents suffer from dwindling fish stocks and excessive heat.

“Rainwater visibly changes colour and is not consumable. We only manage to use it to wash and maybe bathe,” said Daniel Afia, Ibeno’s village head, who retired from the fishing business after a long period of unprofitable endeavours.

Esit Eket and Ibeno are oil producing communities that have endured squalid living conditions, rising poverty levels and loss of livelihood since Frontiers Oil and ExxonMobil started operating there in in 2003 and 1974 respectively.

In the Niger Delta, gas flaring is killing crops, polluting water and damaging human health. The government has promised to end flaring by 2030 under its national climate plan, but communities remain sceptical, given previous failed attempts, a lack of enforcement and necessary technology.

Okon Ekpobia, the village head of Idung Akpeudo, in Esit Eket, farms yam and other crops but is often left frustrated with the harvest.

“Crops don’t do well since oil exploration started in this community,” he said. “Both the quality and the yield is nothing to write home about. I can’t sell my produce and make decent profit from it.”

Farmer Victor Isong, expressed worries over the rising heat, which is affecting his family’s health.

“It does not matter whether it is plants, animals or human beings, everything in our environment is suffering,” Isong said. “My wife and children often come down with heat stroke.”

“At the moment, I have a cough and it is common knowledge that it is caused by the polluted water we drink and the gas flare,” he said.

Thomas Esenyi, a farmer in Esik Eset, recalls how scared he was when there was a gas leak from an oil facility owned by Frontiers Oil in November.

“The fault started during routine maintenance. The gas leakage took over the entire community. The company had to tell residents not to cook anything to avoid fire explosion. We were breathing in that gas and many had chest pain and were fatigued after the incident,” he told Climate Home News.

Several studies have highlighted the devastating impacts of gas flaring on Niger Delta communities, including loss of biodiversity and shrinking water bodies.

“Oil exploration activities, especially gas flaring, has resulted in the extinction of many fish species, especially Bonga fish,” Emmanuel Etia, a fisherman in Ibeno, told Climate Home News. “The flared gas and the ensuing heat also affect the breeding cycle of fish causing some species to migrate to a different area.”

Nigeria is Africa’s most populous country and the continent’s biggest oil producer. Apart from crude oil reserves, Nigeria has the largest gas reserves in Africa and is among the world’s top 10 gas producers, with estimated reserves of 5.72 trillion cubic metres (tcm).

Since 2012, Nigeria has been among the top seven countries flaring gas. According to the Nigerian National Petroleum Corporation, Nigeria flared 35.4 tcm of natural gas between 2016 and 2020.

Flaring emits CO2, methane and volatile organic compounds. Methane, which is the primary constituent of fossil gas, contributes significantly to global warming. Although it only stays in the atmosphere for around nine years, methane has a warming impact 84 times that of CO2 over a 20-year period. Oil production was responsible for about 40% of global methane emissions in 2020, according to the International Energy Agency (IEA).

Aside from the health and environmental costs, it wastes fuel that could generate revenue if captured and sold. Nigeria lost an estimated $762 million to gas flaring in 2018, according to PricewaterhouseCoopers (PwC).

And there is huge unmet demand for energy. According to the World Bank, 85 million Nigerians do not have access to grid electricity and the lack of reliable power results in economic losses equivalent to 2% of GDP annually.

The country is trying to crack down. Nigeria pledged to end gas flaring by 2030, under an updated climate change plan submitted to the UN last year, and has signed up to the Global Methane Pledge, vowing to cut emissions by 30% by 2030, alongside 110 other countries. The country also signed into law its Climate Change Act (CCA) in 2021.

“Gas flaring is the largest single source of climate pollution in Nigeria contributing about 55 million tonnes of carbon equivalent per annum. It is important to arrest the climate pollution from gas flaring if Nigeria is really interested in tackling climate change,” he said.

Many experts and residents of the Niger Delta are sceptical about the government’s goal, in light of its record. Since the first legislation to regulate the oil industry, the Petroleum Act of 1969, was enacted, 10 deadlines to end gas flaring have been missed.

The country continues to invest in oil and gas exploration and is projected to remain one of Africa’s leading crude oil producers and top three gas producers for the next three years.

Previous attempts to tackle the problem have not succeeded primarily because “of the failure to align political and economic interests to action,” Okereke said. “Some of the major climate action that the government could take to address this problem invites them to go against certain powerful interests.”

Canoes on the shore in Ibeno, Nigeria (Photo: Ndueso Etuk)

Samson Benu, an official at the Nigeria Erosion and Watershed Management Project (NEWMAP), said the country’s infrastructure deficit and lack of finance must be addressed before significant progress can be made. Previous attempts to provide these resources since 2016, through the government’s gas flare commercialisation programme, have been fraught by corruption and lack of requisite technology.

To discourage multinational corporations from flaring gas, the government introduced a penalty of $2 per thousand cubic feet of gas wasted. According to Nigeria’s National Oil Spill Detection and Response Agency (NOSDRA), in 2021 the volume of flaring was equivalent to $521 million in fines, which were mostly unpaid.

Bassey criticised some of the provisions in Nigeria’s Climate Change Act, including the requirement that all companies of 50 or more employees set annual emissions reduction targets. Bassey said companies will end up playing with figures and give fictional solutions due to poor oversight by regulatory agencies.

Tijah Bolton-Akpan, the executive director of the environmental justice organisation Policy Alert, called the law “a feel-good illusion”. He said the law does not align with the country’s overall development agenda, which is still very much reliant on crude oil.

“We have a contradiction. On the one hand, we have emissions reduction targets and on the other hand, an economy that isn’t in a hurry to diversify away from the fossil industry. There is an energy transition blind-spot,” Bolton-Akpan told Climate Home News.

He said that the Act does not include the goal of cleaning up communities affected by oil pollution.

“The least the government can do now is to put in place a framework to clean up their badly damaged environment and enable them to have their lives back,” he said.

For fisher Etia, the government’s intents are lofty but they amount to nothing if time is not devoted to enforcement.

“Our lives are not a reflection of the amount of resources in our land because of gas flaring. The government should quit talking and get to work,” he told Climate Home News.

Oil companies operating in the Niger Delta and state government officials did not respond to Climate Home News’ requests for comment.