Plastics resolution tees up battle over oil industry’s plan B

As the world seeks to move beyond burning fossil fuels for energy, the oil sector saw plastic production as a lifeline – but now that’s in doubt too 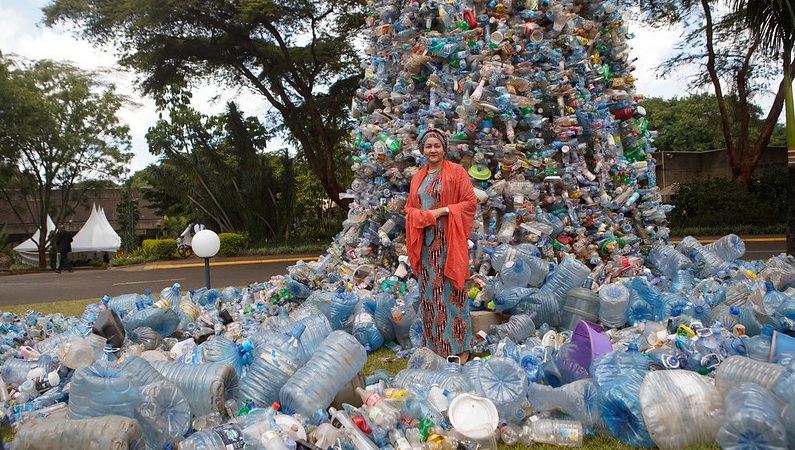 The fossil fuel industry’s attempt to prolong its life through plastic production hit a setback at the United Nations Environment Assembly (UNEA) earlier this month.

In Nairobi, governments agreed the scope of talks on a legally binding plastics treaty, which is likely to curtail the production of plastics as well as encouraging recycling and anti-litter measures.

Use of oil and gas for energy needs to fall rapidly in the next few decades to halt climate change and oil companies had hoped that demand for their products to make plastics would go some way to make up for it.

Until recently, the website of fossil fuel firm BP said “the strong link between economic development and the use of plastics means the use of oil as a feedstock for plastics continues to grow over the next decade”. Shortly after the plastics agreement was signed, the link to the article stopped working and can only be accessed through an independent web archive tool.

BP expects the share of oil demand from non-combusted (grey) sources like plastics to rise in the next few decades. (Photo: BP/Screenshot)

Krista Halttunen researches oil company strategies at Imperial College London. She said these firms are having an “existential crisis” as they face reducing demand for their products for energy. They see plastics as “a bit of a lifeline”, she said, “something that would allow [them] to continue as a viable business into the future when we hopefully have decarbonised”.

Politicians have used plastics to justify oil production projects.  Defending a proposed oil pipeline recently, Ugandan president Yoweri Museveni tweeted: “Some people are worried that our crude oil could Kudiba (not have a market), impossible! I have a shirt that is 65% polyester.”

He added: “When talking about phasing out petroleum, they are referring to fuel for cars, but petroleum will be used for many other things like polyester, etc.”

Some people are worried that our crude oil could Kudiba (not have a market), impossible! I have a shirt that is 65% polyester. When talking about phasing out petroleum, they are referring to fuel for cars, but petroleum will be used for many other things like polyester, etc. pic.twitter.com/zzD1ZI2QAq

But on 2 March, after a series of late night talks, governments agreed to set up two years of talks on a legally-binding plastics treaty which will have provisions “to promote sustainable production and consumption of plastics”.

Pakistan’s delegation was led by climate minister Malik Amin. He told Climate Home: “Our collective addiction to plastics has to end and the $500bn-plus global plastic production industry will need to readjust to this new reality.”

Going into the talks, there were two main rival proposals. One sponsored by Rwanda and Peru wanted the treaty’s international negotiating committee (INC) to cover production of plastics while Japan’s proposal focussed mainly on how to stop plastic getting into the sea.

Environmental Investigation Agency plastics campaigner Christina Dixon said Japan’s proposal “could [have led] us down a path where we don’t get to talk about things like plastic production”.

“At the moment, waste management capacity is already completely overwhelmed due to the huge volumes of plastic that we’re producing,” she said. “It’s like mopping the floor without turning off the tap.”

Greenpeace plastics campaigner Graham Forbes said the oil and plastics industries favour a “focus on the idea that recycling and seeing this as a waste problem is really how we address it”.

He said “it diverts attention away from the absolutely fundamental need to stop building plastic production facilities around the world which they are significantly investing in”.

These industries have funded anti-littering campaigns in the US and Europe.

There was a broad consensus at the UNEA in favour of Rwanda and Peru’s approach and they won out when their text was combined with Japan’s. Countries in favour of their approach included European, African and small island states.

The treaty will be legally binding. India had sought a voluntary agreement but settled for “national circumstances and capabilities” to be taken into account. They and other developing countries are expected to push for extensive finance from rich nations.

Nandini Harihar, a researcher for the India-based Council on Energy, Environment and Water, told Climate Home this money could be spent on measures like recycling facilities and awareness raising campaigns.

Forbes said that, as in climate talks, the issue of finance was likely to be “highly contentious”. But he said he’d been encouraged by European countries’ progressive stance at the talks and thought that Russia’s invasion of Ukraine meant the world was “desperate for examples of multilateralism working”.

He added that he would be looking out for resistance to an ambitious treaty from major plastic producers like the US, China and India.

Talks on the treaty will be held under the INC, which every government can participate in. It is aiming to reach a deal by 2024.