Officials from European and vulnerable countries are trying to make sure promised money reaches those in need, but a US shortfall looms large 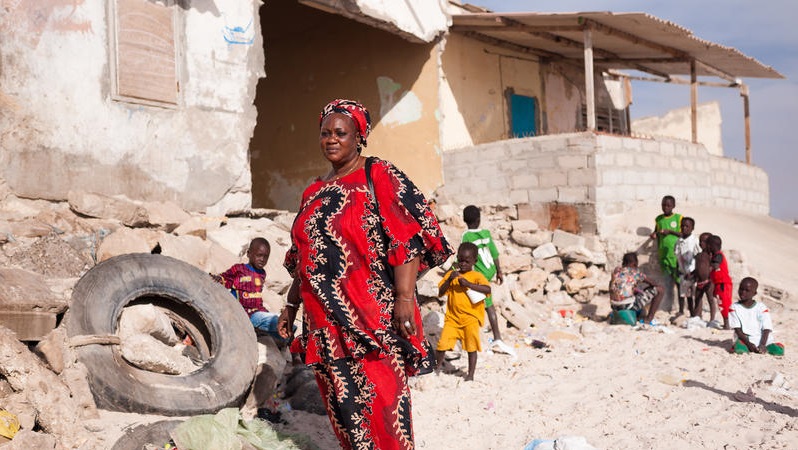 A woman's home is threatened by coatal erosion on the outskirts of Senegal's capital Dakar. (Photo: Clement Tardif/Greenpeace)

As the climate changes catastrophically, the costs of adapting are ballooning. By 2030, the UN Environment Programme estimates that the developing world will have to spend up to $300bn a year just to cope.

Madeleine Diouf is the head of climate change in Senegal’s environment ministry. She told Climate Home her West African nation needs to build dykes to protect its beaches, its tourism industry and its fishing communities from erosion caused by sea level rise.

At the same time, it needs to provide income to farmers whose crops have failed because of drought and protect homes from floods. But, Diouf said: “We are poor people. This will not allow your development if you are always focussing on climate effects.”

Analysis of six African national plans by PowerShift Africa finds on average they are investing the equivalent of 2.8% of GDP on adaptation. That’s development finance not available for other needs like healthcare, education and economic development.

Diouf represents the least developed country (LDC) group at UN climate talks. They played only a tiny role in causing climate change yet they’re often hit hardest by it and don’t have the money to adapt. So they have long been asking for finance from richer countries who are more responsible for climate change.

At Cop26 in Glasgow last November, all countries agreed to “note with concern that the current provision of climate finance for adaptation remains insufficient to respond to worsening climate change impacts in developing country Parties”.

To help fix this insufficiency, they “urge[d] developed country Parties to at least double their collective provision of climate finance for adaptation to developing country Parties from 2019 levels by 2025”.

In 2019, UN figures show developed countries gave $20.1bn in adaptation finance. So by 2025, they should collectively be giving $40bn. That’s far short of what developing countries need but it is also likely to be a difficult target to meet, given contributors’ track record.

At climate talks in Copenhagen in 2009, developed countries led by the US promised to collectively mobilise $100bn a year in climate finance by 2020. The final figures for 2020 have yet to be released but they are highly unlikely to have met this target as they gave just $80bn in 2019. The US was largely responsible for not pulling its weight.

The shortfall between a country’s climate finance in 2017-18 and its fair share,  (Photo: ODI)

This collective failure has soured international relations and undermined rich countries’ moral authority when calling for emerging economies like China and India to curb their emissions.

In an effort to avoid repeating the $100bn letdown, a few dozen government representatives gathered in the Finnish city of Lahti on Sunday and Monday.

They dined with a view of a ski jumping slope, amid an unseasonable snowstorm.

Most of them were from the governments of the self-styled Champions Group on Adaptation Finance. This was set up last September and includes 11 developed countries who have promised to give as much money for developing countries to adapt to climate change as they give them to reduce emissions. In 2018, only 21% of climate finance went to adaptation.

Joining them were representatives of the world’s poorest countries (LDCs) and small islands (AOSIS), the countries most in need of adaptation finance.

After two days of talks, they agreed to “champion the development of a collective plan” to deliver on the doubling adaptation finance pledge. The champions group have tasked different “champion” countries with leading on aspects of this plan with a view to putting something together by Cop27 in Egypt in November.

What exactly is in this plan is still to be decided. IIED climate director Clare Shakya told Climate Home that developing countries would want details on which countries promise to give what amounts and through what vehicle. Whereas “many richer countries are likely to be more resistant to provide that level of detail”.

Another conflict will be over how much of the finance is in the form of loans and how much will be grants. Diouf said: “For poor people, you can’t ask them easily to have some loans to respond to something they are not responsible for. We are for having grant-based support.” In 2017-18, nearly 80% of climate finance was loans not grants.

Greater resistance to developing countries’ wishes is likely to come from the rich countries that weren’t in the room in Lahti.

The US and Canada participated remotely and as “guests” not “champions”. Wealthy countries like Japan and France, which only plans to give a third of its finance to adaptation, were not invited.

The biggest roadblock to adequate climate finance has been – and looks likely to continue to be – the USA.

The Overseas Development Institute says the US’ fair share, based on its population, wealth and historic emissions, of the rich world’s climate finance is around 43%. That would imply $17 billion for adaptation in 2025.

Instead, Joe Biden’s administration has pledged $11.4bn a year by 2024, covering both mitigation and adaptation. In the 2022 appropriations bill, Congress approved just $1bn.

The US’s commitments could get even weaker. Biden’s proposals to increase climate finance have been repeatedly watered down by Republicans in Congress, working with anti-climate Democrats. Republicans’ power is likely to grow after November’s mid-term elections and by 2025 there could be a Republican president hostile to the very notion of climate finance.

If the US again shirks its responsibilities, will Europe, Japan and others cover the shortfall? Or will countries like Senegal have to cut back on flood protection and support for drought-hit farmers?