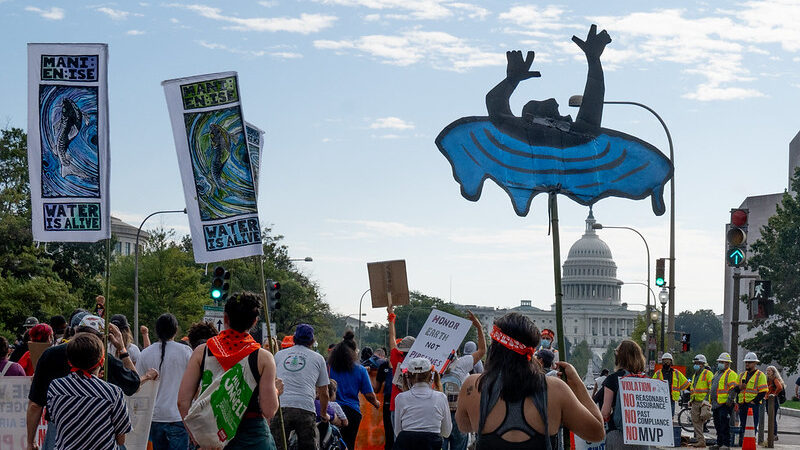 Who are the real radicals? An anti-pipeline protest on Pennsylvania Avenue, October 2021 (Pic: Victoria Pickering/Flickr)

Countries that are increasing production of fossil fuels are “dangerous radicals”. That was António Guterres’ take on the latest UN climate science report landing with a thud on Monday. Who could he mean?

It would be easier to list countries that are not responding to fossil-funded massacre and soaring coal, oil and gas prices with more of the same toxic industry that got us all into this mess.

Saudi Arabia, true to form, did its utmost to twist the scientific evidence to imply carbon capture and storage could keep the oil sector alive in a climate-safe future. Protracted wrangling over the issue had the bonus effect of sabotaging the Intergovernmental Panel on Climate Change’s (IPCC’s) comms plan, such as it was, making the summary for policymakers all but unreadable and its launch six hours late. (We’ve got you covered with the five main takeaways.)

António Guterres, head of the UN

But Guterres’ remarks don’t just apply to Gulf petrostates, where the conflict of interest is in plain sight. Would-be climate leaders like the US, Canada, UK and Norway persist in talking tough on emissions while being soft on the cause of emissions.

Until recently, you could count on Costa Rica to leave it in the ground. Along with Denmark, it launched the Beyond Oil and Gas Alliance at Cop26, attempting to lead a global movement to turn off the taps – even if few were following.

The IPCC offered up a whole toolbox of solutions, for those willing to use them.

One country quietly innovating is Sweden. It would be easy for politicians to point at the forests and clean energy mix and keep their heads down, but that wasn’t good enough for the birthplace of Greta Thunberg.

Instead, with public opinion behind them, eight political parties agreed to target the larger chunk of emissions embedded in imported products. That means shaking up international norms, changing behaviour at home and testing the limits of Sweden’s soft power on trading partners.