Muslims find it hard to reconcile fasting with working outdoors in temperatures of over 35C, as heatwaves become increasingly common 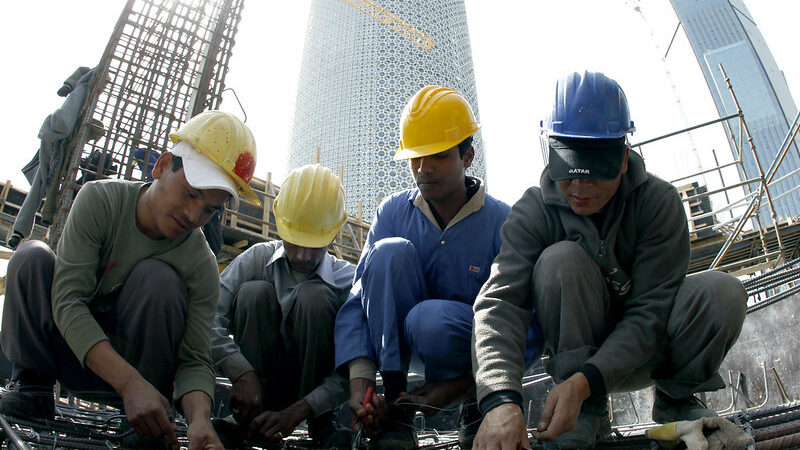 Ashish Jangid is a practising Hindu working in the construction sector in Saudi Arabia and has conflicted feelings about Ramadan.

“Work is lighter during Ramadan and just in the evenings because even the management is relaxed. But when I work fewer hours, I get paid less too,” says the Indian migrant worker. “I am also worried about what it will be like after Ramadan because we will work in the daytime again until July. It is going to be really hot.”

It is not unusual for daily temperatures to top 35C and a high of 45C was recorded in Abu Dhabi’s Al Dhafra region last week. Climate change is increasing the frequency of heatwaves in urban hubs across the Arabian Gulf: Saudi Arabia, United Arab Emirates (UAE), Kuwait, Oman, Bahrain, and Qatar.

This year Ramadan began on 2 April and will last 29 or 30 days, depending on the moon. Muslims fast from sunrise to sunset during Ramadan, around 14 hours a day for those living in Saudi Arabia. That means no eating or drinking, even water.

An analysis of weather station data that was recorded till March 2020, shows some parts of the UAE have crossed the temperature threshold that the human body can withstand. Ras al Khaimah has, at times, recorded wet bulb temperatures of 35C, when the body is no longer able to cool itself by sweating.

The oil-rich countries of the region generally have a better capacity to cope with the extreme climate as most daily life takes place in air-conditioned indoor settings. But weather like this is especially challenging for the very large population of migrant workers already facing long work hours, wage theft, and unsuitable living spaces.

To protect these workers, all Gulf countries prohibit outdoor work during the hottest hours of the day, but this is limited to the summer season, which doesn’t officially begin till mid-June. During that period, outdoor work stops from around noon to 3 or 4pm, depending on the country.

However, for workers like Jangid, temperatures reach dangerous levels before the summer season starts, forming a dire health hazard.

A 2019 heatwave in the region in early June – before the official start of the summer – recorded the highest temperature on Earth, 63C in direct sunlight. Heatstroke killed at least one outdoor worker in Kuwait.

A Guardian investigation found that hundreds of migrant labourers are worked to death in Qatar each year due to heat stress.

“There’s a serious correlation between heat and the physical and mental health of an individual,” says Mahaa K Raja, a Pakistani doctor based in Saudi Arabia. “The detrimental outcomes can translate into heat exhaustion or something as serious as a heat stroke. Symptoms may range from feeling queasy, minor irritability, dizziness to delusions, irrational behaviour, hallucinations, and coma.”

People with a pre-existing mental illness, particularly psychosis, have a two to three times higher risk of death during heatwaves than people without, according to a report by Imperial College’s Grantham Institute on Climate Change and the Environment.

Ahmed Mohsin, a food delivery rider, says that he has been emotionally distressed trying to take care of his health in Dubai’s current climate while working outdoors, with peak temperatures of 34-37C.

Mohsin is a devout Muslim but he has not been able to fast this year during Ramadan.

“I did first the first three days but I was feeling so dizzy and like I would faint. I wasn’t able to drive,” he says. “And if fasting gets in the way of your health, God orders you to not fast. God is merciful.”

He is in his early 20s and says that the long work hours he has been facing over the past four years as a delivery driver have really impacted his health. “Last summer I fainted a few times and I am also always feeling very tired and get headaches a lot. I haven’t seen a doctor but I know I am not in good health.”

Like the other tens of thousands of migrants workers who have moved to Dubai in recent years to meet the increase in the demand for food deliveries, Mohsin does not get a fixed salary but around $2.60 per delivery.

This is why keeping up with an exorbitant amount of orders daily is essential for him and his family that he is supporting back in Lahore, Pakistan.

Working conditions are expected to become increasingly dangerous for people like Mohsin and Jangid as the region will disproportionally suffer from heat extremes due to climate change.

“The Arab world is a highly sensitive area to climate change and policymakers need to make sure climate is a priority agenda,” says Lina Yassin, a Sudanese climate activist.

A report on the impacts of climate change in the Middle East and North Africa (MENA) states that global climate projections suggest a significant intensification of summer heat extremes in the region.

“These events involve excessively high temperatures (up to 56C and higher) and will be of extended duration, being potentially life-threatening for humans,” the report notes.

“By the end of the century, about half of the MENA population (approximately 600 million) could be exposed to annually recurring super- and ultra-extreme heatwaves.”

According to the World Bank, capital cities in the Middle East could face four months of exceedingly hot days every year.