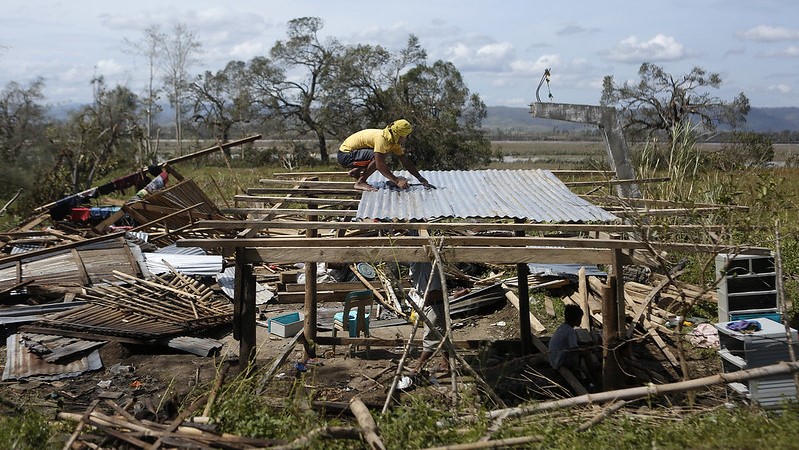 A man repairs his house in the province of Cagayan, Philippines, in the aftermath of Typhoon Haima (Photo: International Federation of Red Cross and Red Crescent Societies/Flickr)

A coalition of vulnerable countries is getting to work to develop an international funding mechanism for victims of climate disasters.

Finance ministers of the V20 group of vulnerable nations, a coalition of 48 developing countries, have agreed to design and test a funding facility to address the losses and damages of lives, livelihoods and infrastructure caused by climate impacts. They will use resources from a joint V20-Climate Vulnerable Forum fund.

In a communique, the groups said “growing loss and damage due to insufficient adaptation responses” and a gaping hole in climate protecting finance was “fast emerging and major macroeconomic concern for the V20”.

In the absence of international support to help communities recover from climate disasters, the facility aims to practically demonstrate why it is needed and how it can help affected communities.

The Children’s Investment Fund Foundation and the Open Society Foundation have respectively committed $1m and $500,000 towards the facility and the group is seeking further donations, including from G7 and G20 countries.

“Loss and damage is already happening whether it’s resourced or not” and local communities in vulnerable countries are bearing the brunt, Sara Jane Ahmed, the group’s finance advisor from the Philippines, told Climate Home News.

“Our intention is to show that there are potential ways forwards to deal with this economic issue,” she said.

At the Cop26 climate talks, developing countries united behind a call for a loss and damage finance facility. But the proposal was resisted by the US and the EU, who have feared facing liability for their historic emissions and responsibility in causing the climate crisis.

Instead, developing nations had to settle for “a dialogue” to discuss arrangements for funding activities that would “avert, minimise and address loss and damage”.

But delaying the creation of a loss and damage fund is not an option for many V20 nations, where climate vulnerability and the lack of access to finance is compounded by the economic fallout from the Covid-19 pandemic, ballooning debt and rising food and fuel prices.

Speaking on behalf of the V20 Bangladesh presidency, Abul Kalam Azad, special envoy at the Climate Vulnerable Forum, told the meeting of finance ministers on Friday that treasuries were already allocating significant and growing proportions of  public budgets to fund loss and damage in affected communities.

“The issue of loss and damage is closely related to the adequacy or the lack of adaptation finance, which goes beyond the realm of climate justice and human rights, having a direct relevance to the current global priority of securing supply chains,” he said.

As 1.5C overshoot looms, a high-level commission will ask: what next?

Ahmed told Climate Home disruptions to supply chains caused by climate disasters in vulnerable countries made a strong economic case for trading partners to support the creation of a loss and damage funding facility that could help minimise the disruption in the first place.

Humanitarian aid goes some way in providing countries with immediate supplies of food, medicine and relief assistance, but it does not address the infrastructure damage, Ahmed said.

In South Africa, for example, the costs of recovering from devastating flooding which killed 448 people in and around Durban earlier this month amounts to an estimated 12 billion rands ($760m), according to Sihle Zikalala, premier of the affected province of Kwazulu-Natal.

Insurance could be a way to deal with that. This could include climate-smart insurance mechanisms for small and medium sized companies.

In the long-term, the V20 said it recognised the importance of domestic and regional insurance markets. The new funding mechanism would help support their deployment while subsidising premiums.

It is being designed in collaboration with the group’s members and other small nations with the aim to scale it up and give recipient countries agency in deciding how the money is best spent.

“Current financing schemes are not fit for the reality. At the moment, countries apply to funding for specific projects. But there is a need to be agile in responding to [climate disasters],” said Ahmed.

The V20 is expecting to present its facility design at the Cop27 climate talks in Sharm el-Sheikh in Egypt in November. By then, it hopes that some of the funds would have been disbursed to communities hit by climate impacts in V20 countries as part of pilot projects.

In the joint statement, ministers called for “finality” on bespoke and additional funding for loss and damage at the next climate talks.

“We call on Cop27 to establish an international financing mechanism for climate change loss and damage in solidarity with victims least responsible for, and least equipped to withstand, the increasingly extreme shocks driven by climate change,” the statement reads.

The group further agreed to commission a study into its members’ existing expenditures in recovering from climate disasters.

Bangladesh’s special envoy Azad said the study would help “build evidence” for the design of the loss and damage fund and that of the “global shield” initiative proposed by G7 president Germany to protect vulnerable nations from climate risks.