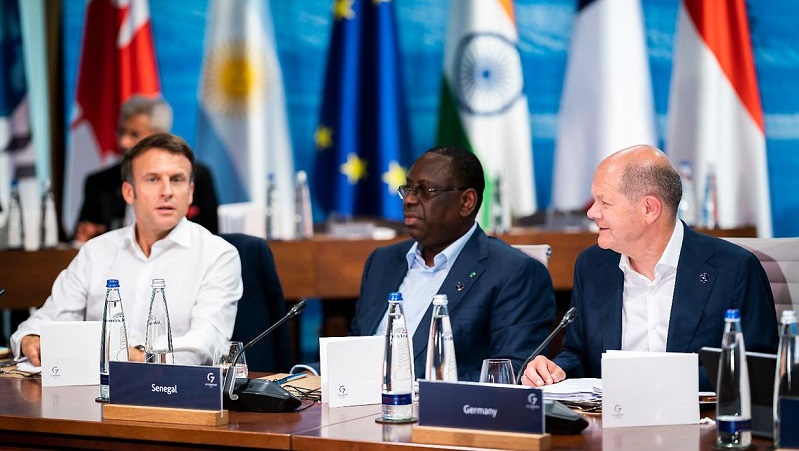 The leaders of France, Senegal and Germany talk at the G7 summit. (Photo: German government/Kugler)

The G7 group of wealthy countries has weakened a pledge to end finance for foreign gas projects, under the urging of Germany’s leader Olaf Scholz.

At Cop26 last year, six G7 countries agreed to end public finance for fossil fuel projects overseas by the end of 2022 – a commitment which was reaffirmed by G7 environment ministers at a meeting in May, when hold-out Japan joined them.

But G7 leaders meeting in the Bavarian Alps in Germany this week introduced new loopholes to the pledge. In a joint communique published Tuesday, they “stress[ed] the important role increased deliveries of LNG [gas] can play” in accelerating the phase out of their dependency on Russian energy and “acknowledge[d] that investment in this sector is necessary in response to the current crisis”.

“In these exceptional circumstances, publicly supported investment in the gas sector can be appropriate as a temporary response,” the statement adds.

German chancellor Scholz told a press conference: “When it comes to financing fossil sources of energy, this is something that has to come to an end. The future does not lie in gas.” But, he added: “In the short-term, gas is going to be necessary and there can be investments in the transitional phase which are going to have to be supported”.

To stop funding Russia’s war on Ukraine, European countries have sought to boost gas supplies from non-Russian sources including the US, Qatar, Algeria, Norway, Egypt and Israel.

On the other hand, she said the language makes clear that support for gas must be temporary, consistent with climate objectives, including the 1.5C goal, and not create a lock-in effect.

The International Energy Agency has warned that new investments in coal, oil and gas beyond 2021 were incompatible with a pathway to limit global heating to 1.5C.

Luca Bergamaschi, director of the Italian climate think tank ECCO, agreed that the climate conditions and competition from clean alternatives “mean there is little to no investment case for new gas” without them being “artificially subsidised”.

For Gareth Redmond-King of the UK-based Energy and Climate Intelligence Unit, the statement reflects G7 nations’ “responsibility to feed people and keep the lights on”. “Short-term surges in fossil fuels can, as the EU is showing, be trumped by more ambitious emissions pledges in the medium-term,” he said.

An earlier version of the text, seen by Climate Home News, shows a proposal to describe new gas investments as “can/could be necessary”. Sources close to the talks, told Climate Home Scholz had directly proposed the wording, backed by Italy and opposed by the UK and France.

On a recent visit to Senegal, Scholz said that supporting the West African country’s gas production plans was “a matter worth pursuing intensively“. Senegal’s leader Macky Sall was invited to the G7 summit along with the president of gas-producing Argentina Alberto Fernández and the leaders of India, Vietnam and Indonesia.

Italy’s president Mario Draghi told a G7 press conference: “It’s quite clear that in the present situation, we’ll have short-term needs that will require large investments in gas infrastructure in developing countries and elsewhere. But we have to make sure that they can be retrofitted to carry hydrogen so that’s a way to reconcile short-term needs with long-term climate needs”.

On the sidelines of the summit, Draghi met with his Argentinian counterpart Fernández. The two men discussed the possibility of Italy “participating in existing projects in Argentina to install gas liquefaction plants and export it,” Fernández said in a tweet.

The G7 further confirmed it was pursuing ‘just energy transition partnership’ agreements with India, Vietnam, Indonesia and Senegal as well as previously-announced talks with South Africa.

Climate finance watcher Joe Thwaites noted that countries which have pledged to end international fossil fuel finance currently spend around $33bn a year backing coal, oil and gas projects abroad. OECD data suggests that that this $33bn would be enough to plug the gap to the $100bn a year rich countries have promised to support developing countries in addressing climate change.

Transferring the fossil fuel finance to clean climate finance would close the gap, Thwaites said, adding: “Hard to think of a better deal: end fossil fuel financing that’s driving the climate crisis and use it to increase funding for clean energy access in developing countries. A genuinely rare win-win.”

In the communique, G7 leaders promised to “intensify our efforts” to deliver on the $100bn goal “as soon as possible”.

A recent Overseas Development Institute (ODI) report found that “the US is overwhelmingly responsible for the climate finance gap”. In 2020, it gave just $2bn in climate finance when its “fair share” is $43bn, according to calculation that includes the size of its economy and historical emissions.

This article was amended on 4 July 2022 to clarify the gap to the $100bn climate finance target.