EU set to use ‘green’ label for gas, nuclear investments after parliamentary vote 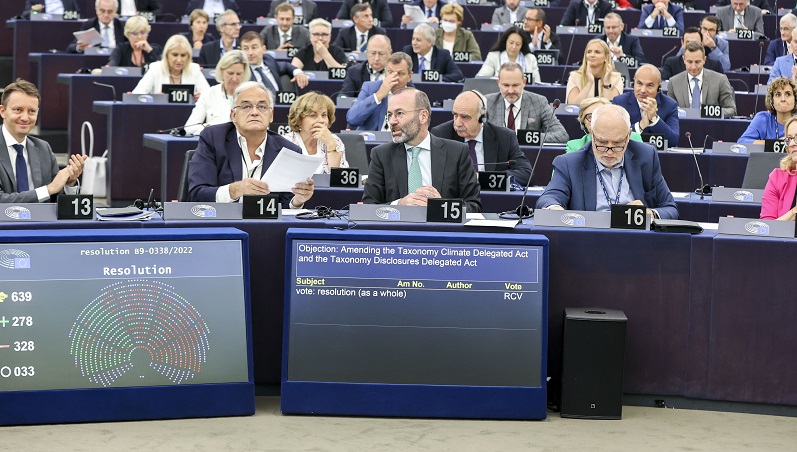 The European parliament votes on the taxonomy (Photo: European Parliament)

The European Parliament voted on Wednesday in favour of plans to award a green investment label to nuclear and gas projects amid loud protests from green activists, who denounced the “betrayal” of MEPs’ climate commitments.

A motion to veto the European Commission’s proposal to include nuclear and gas in the EU’s sustainable finance taxonomy was defeated by 328 votes to 278.

A minimum of 353 votes was needed to reject the plan, which means it is now officially approved by the European Parliament.

Objection to the inclusion of nuclear and gas in EU green finance taxonomy is rejected: 278 votes in favour, 328 votes against.

This means the proposal goes through: nuclear and gas are now officially recognised as “transitional” activities under the taxonomy. pic.twitter.com/G6se90ZUoi

Before it becomes law, the proposal to include nuclear and gas in the EU’s green finance taxonomy must also face a vote in the EU Council of Ministers representing the EU’s 27 member states.

However, a majority of 20 countries is needed to veto the proposal in the Council, which makes a rejection highly unlikely.

Reacting on Twitter, the energy minister of Luxembourg said he would challenge the decision before the EU Court of Justice.

“Luxembourg and Denmark will press legal charges and the Court will rule about its legality,” wrote Claude Turmes, saying he deeply regrets the Parliament’s decision.

Michael Bloss, a German Green MEP, denounced the “madness” of labelling nuclear and gas as sustainable investments, saying it will keep Europe addicted to Russian fossil fuels for many more years.

“France’s nuclear reactors and waste dumps will be renovated and new fossil gas infrastructures created,” Bloss said in a statement. “No serious bank will trust this taxonomy,” he added, saying the Greens were now preparing to take legal action against the decision.

Greta Thunberg, the teenage activist who started the Fridays for Future movement, reacted coldly on Twitter, saying the vote will delay the green transition and “deepen our dependency on Russian fuels”.

“The hypocrisy is striking, but unfortunately not surprising,” she wrote.

The European Parliament just voted to label fossil gas as “green” energy. This will delay a desperately needed real sustainable transition and deepen our dependency on Russian fuels. The hypocrisy is striking, but unfortunately not surprising.
This is still #NotMyTaxonomy

Pascal Canfin, a French MEP who chairs the Parliament’s environment committee, sought to assuage the concerns of green activists, reminding them that the taxonomy does not give a blank cheque to all gas investments.

“The conditions set by the taxonomy for gas are precise: gas is only possible to replace coal, until 2030, under emission thresholds that are not considered dangerous and with reinforced transparency obligations,” he wrote on Twitter.

Nuclear Europe, an industry association, congratulated MEPs after the vote, saying Parliament had taken a “science-based decision” to include nuclear in the taxonomy.

“It is fantastic to see that a majority in the European Parliament has decided to listen to the experts and take the right decision,” said Yves Desbazeille, director-general of Nuclear Europe.

“We have less than 30 years left to decarbonise our economy in a sustainable way. By listening to the science, these MEPs have strengthened the EU’s chances of achieving this ambitious goal.”

However, it said the European Commission’s taxonomy proposal “could have done more to promote coal phase-out and the adoption of best-in-class technologies” such as hydrogen and renewable gases.

“It is also crucial that we overcome bottlenecks for imports of diversified natural gas and LNG [liquified natural gas], and renewable hydrogen,” said James Watson, secretary-general of Eurogas.

This article was produced by Euractiv and republished under a content sharing agreement.