The German initiative aims to fix the flaws in humanitarian aid, but with no new money behind it campaigners are sceptical 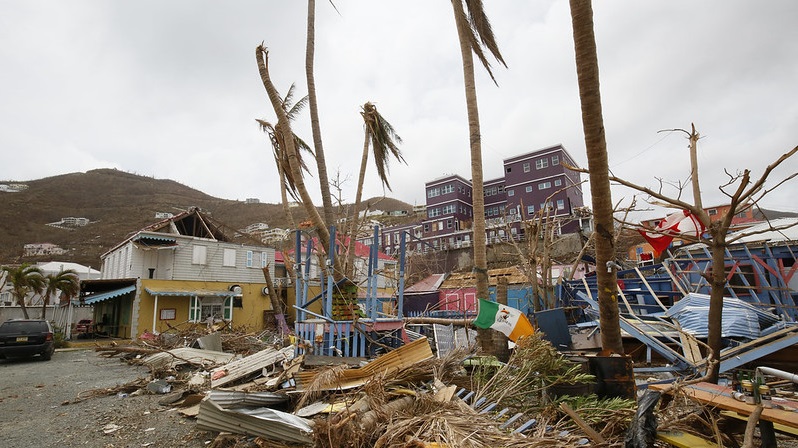 Germany is working on a “global shield” to help communities in poor and vulnerable countries recover faster from climate disasters.

It aims to fix flaws in the humanitarian system, which can deliver aid after disasters like drought or storms but slowly and patchily. Instead, the German government want to improve insurance and social security schemes so that support comes fast and systematically.

Critics say the initiative is rich countries’ latest attempt to avoid paying for climate damage by keeping the burden on individuals in poorer countries through insurance premiums.

German chancellor Olaf Scholz told ministers assembled for the Petersberg Climate Dialogue in Berlin on Monday “we want to establish a global shield against climate risk”.

“We must acknowledge that there is climate-related loss and damage and that the most vulnerable countries, in particular, need our solidarity in dealing with it,” said German development state secretary Jochen Flasbarth. “This is where we want to build bridges for the upcoming global climate conference in Egypt by putting forward concrete solutions.”

In a statement, the German development ministry BMZ said: ” If there is no protection scheme in place, a drought can mean that a smallholder farmer loses not only her harvest but also her entire livelihood because she cannot afford to buy new seeds.”

On the other hand, “when a preparedness and protection scheme is in place which kicks in automatically in the case of a crisis, money for new seeds is immediately available and damage is limited. That is much cheaper in the long run than having farmers slip into poverty,” BMZ said.

Germany is working on the global shield with the V20 group of countries which are highly vulnerable to climate change. The German-hosted G7 agreed in principle to support this concept and details are expected to be announced at Cop27 in Egypt in November.

According to a source with knowledge of discussions, the German government wants to work initially with 5-10 vulnerable “pathfinder” countries to identify climate risks and needs and link those to existing funding instruments like the Insuresilience Solutions Fund (ISF) and the Global Risk Financing Facility (GRFF). The ISF is funded by Germany’s state development bank KfW and the GRFF is co-funded by Germany, the UK and the World Bank.

The money will go towards areas like insurance, risk pooling and strengthening social security systems. Risk pooling is when several government entities pay money into a pot which they can draw from when disaster strikes.

No additional finance has been dedicated to these facilities as part of the global shield. In 2021, the ISF spent €6.9m  ($7.0m) co-funding insurance premiums and the GRFF spent $203m.

Campaigners told Climate Home that insurance is inaccessible to many of the world’s poorest and only covers certain types of climate disasters.

They expressed fears the global shield was a distraction from setting up the dedicated loss and damage finance facility which low and middle-income countries are demanding and rich ones are blocking.

Roseline Isata Mansaray, the founder of Fridays for Future Sierra Leone, told Climate Home that insurance in Sierra Leone, one of the countries ISF works in, was accessible only to people who are “rich and middle class”.

“If, for you to have your daily bread is very difficult for you, how are you ever going to feel like insurance is something you can pay?” she asked.

Over the rainbow: The role of hydrogen in a clean energy system, explained

Even with the money, Climate Action Network’s Harjeet Singh added that some older and marginalised people can struggle to fill in the forms, set up the bank accounts and deal with the officials necessary to arrange insurance and then claim a pay-out.

While the global shield intends to subsidise some payments, Singh questioned whether rich countries would continue to provide these subsidies indefinitely as the climate worsens, disasters become more frequent and insurance premiums rise. If not, he said, the cost would quickly pass on to individuals and governments in poorer countries.

And insurance companies often pay out far less than the real costs from climate disasters. When Hurricane Maria hit Dominica in 2017, the financial costs were estimated at $1.4bn but the Caribbean Catastrophe Risk Insurance facility paid out just $0.02bn.

“The German government loves insurance because [Germany has insurance companies like] Munich Re,” Singh said. “They see a lot of opportunities of selling insurance to the developing world where the penetration is very low.”

Stockholm Environment Institute researcher Zoha Shawoo said that insurance only works for sudden disasters like storms, droughts and wildfires and not slower ones like desertification and sea level rise. It also doesn’t cover non-economic losses like the losses of cultures, which is hard to put a price on.

Germanwatch researcher David Ryfisch told Climate Home the global shield was “just an initiative” at this stage. He said: “The ideas behind it are good but as long as it isn’t backed by finance, it risks disappointing the developing countries which are anyway already cautious as to how much the shield can do and whether it is meant to be a distraction from their loss and damage finance ask”.