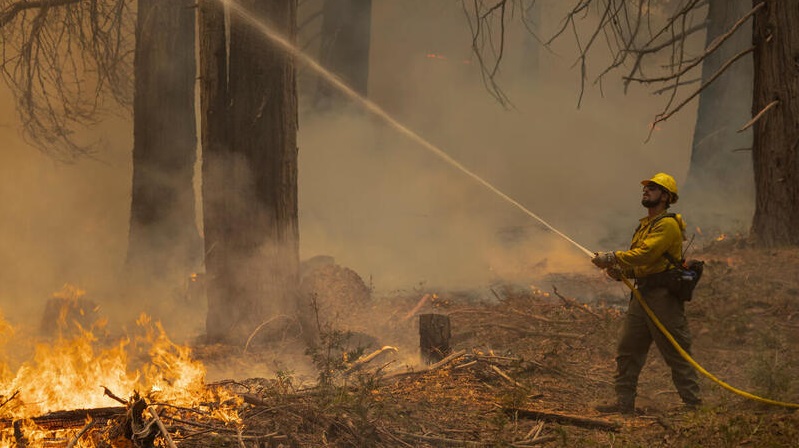 A firefighter battles a blaze in California (Photo: David Mcnew/Greenpeace)

After a dramatic U-turn from holdout Senator Joe Manchin on Wednesday, the US is set to pass a bill which includes $369bn in climate and energy spending.

Since his election, Biden has tried to pass ambitious climate legislation to meet this target but coal-state Senator Manchin, whose vote is needed to pass any legislation, has repeatedly blocked it.

Talks between Manchin and the Biden administration were thought to have ended for good last month and Biden announced he would instead take executive action, which does not depend on Senate support.

But yesterday, Manchin announced he would support a bill very similar to the one he rejected a month earlier, rebranded the “Inflation Reduction Bill”.

It raises money mainly from corporation tax and spends it on healthcare, debt repayment and $369bn of climate and energy measures.

Companies wanting to build factories producing green technologies like solar panels or wind turbines can apply for $10bn in investment tax credits and heavy industries like cement and steel will be given $6bn in grants and tax credits for emissions reductions.

American homeowners will be able to apply for $9bn in partial refunds and $1bn in grants for home energy efficiency improvements.

Reacting, Minnesota Senator Tina Smith tweeted: “Holy shit. Stunned, but in a good way…[Big Fucking Deal]” while UCSB professor Leah Stokes, who has been pushing for a climate bill behind the scenes, called it “game-changing”.

Some climate groups were more cautious, wary of hidden support for the fossil fuel industry. Food & Water Action executive director Wenonah Hauter warned: “More subsidies for dirty hydrogen, carbon capture, and nuclear energy are not climate action, they are the opposite.”

Brett Hartl, from the Centre for Biological Diversity, pointed out the scale of funding paled in comparison to the $800 billion spent on the US military every year.

“What’s truly terrifying are the unknown concessions made to [Senator] Manchin to get this desperately needed funding,” he said. “As a coal baron, Manchin wants permitting changes that would ramp up mining and drilling at the worst possible time for our planet.”

We now have a game-changing clean energy and climate package ready to go in the Senate. What’s in the “Inflation Reduction Act of 2022?” $369 billion in transformative investments.

The bill contains funding to hire staff to speed up permitting and approval of projects, whether in clean technologies or fossil fuels. Manchin owns a stake in a series of coal companies which are managed by his son.

While Manchin’s approval removes the main obstacle to the bill passing, it still needs to go through the House of Representatives and the Senate before Biden can make it law. Arizona’s Democratic senator Kyrsten Sinema, another holdout against Build Back Better, has yet to confirm whether she backs the revised text.