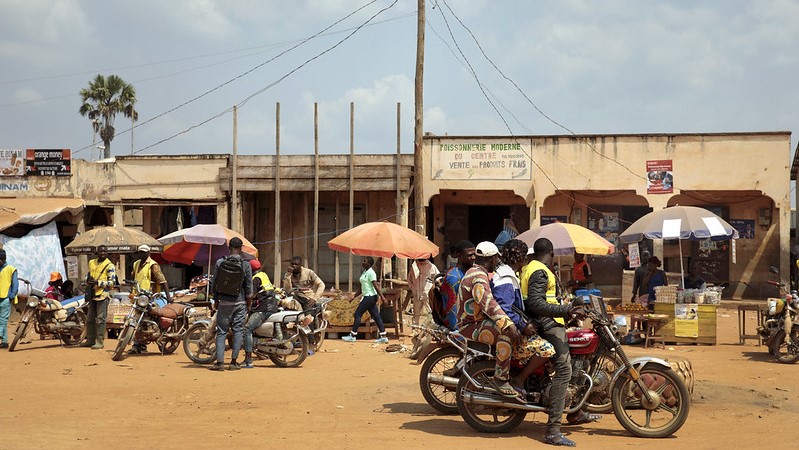 Moto taxis stand along one of the main intersections in Batchenga, Cameroon, which marks the end of the paved road going north (Photo: UN Women/ Ryan Brown/Flickr)

For much of Africa, energy transition is first and foremost about energy access.

That’s because 600 million people still don’t have access to electricity and the continent’s energy needs are booming.

That’s also the argument the African Union used when its officials asked the African group of climate negotiators to adopt a position for Cop27 that endorsed all sources of energy, clean and dirty, to deliver affordable energy.

A technical document which informed the proposal, seen by Climate Home News, mooted investments in oil and coal in the medium term, with financing for gas into the long term.

While a number of African nations have backed gas a “bridge fuel”, African climate diplomats rejected the pro-gas stance arguing that the position would distract from another, perhaps more pressing financing need: adaptation.

Finance is at the top of the agenda for the Egyptian Cop27 presidency. During a meeting in Addis Ababa this week, the Cop27 host and the UN convened international financiers with the intention to match bankable climate projects with private funders ahead of the Sharm el-Sheikh summit. Egypt itself pitched for $11.4bn of funding to support adaptation and carbon-cutting projects.

The Cop27 presidency’s drive to mobilise additional private finance comes hot on the heels of a stark reminder of failed promises on funding. The OECD quietly released the latest data on international climate finance flows. It confirms that rich countries fell $17bn short of mobilising $100 billion a year by 2020.

Besides the eroded trust between vulnerable and wealthy nations, the lack of finance is preventing ready-to-fund projects from getting going in Africa and elsewhere.

Reminder: the $100bn goal is a tiny fraction of the trillions that need to be shifted to clean projects. For scale, 28 of the largest oil and gas producing companies made close to $100bn in combined profits in the first quarter of the year alone.

UN chief António Guterres called it “immoral” and “grotesque greed“. He urged governments to tax oil and gas companies’ profits and use the funds to support the most vulnerable face the energy and cost of living crisis.

But not everyone agreed with him on who should foot the bill of the energy crisis. The IMF agreed that government should shield vulnerable people from price hikes but argued the costs should be passed on to consumers to encourage energy savings and moving away from fossil fuels.

“We need both: windfall taxes on oil and gas profits; and a shift to policies that subsidise people, not energy,” Chris Beaton, of the IISD think tank, told Climate Home.

In case you missed it, India has finally turned a pledge by Narendra Modi at the Cop26 summit into an updated climate plan. A government press release confirmed a target for clean energy which had caused confusion among experts.

India is aiming for half of installed electricity generation capacity to come from non-fossil sources at the end of the decade, not half of energy use – which would have been much harder to achieve.