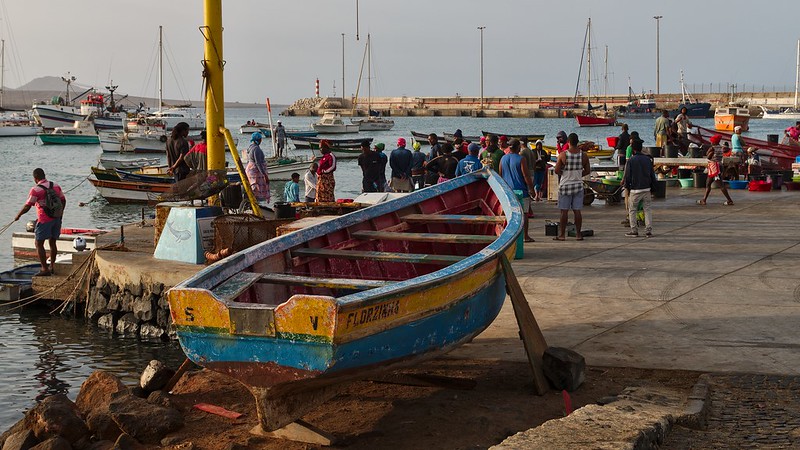 Fishermen return with their catch in the town of Palmeira, on Sal, Cape Verde (Photo: Rob Oo/Flickr)

Climate vulnerable nations in Africa are showing growing interest in debt-for-climate swaps to address ballooning debt and spur climate investments. Increasingly, they have the ear of financial institutions.

Today, 58% of the world’s poorest countries are in debt distress or at high risk of it. In sub-Saharan Africa, Covid-19 has squeezed budgets and pushed average debt levels above 60% of GDP.

Helene Gichenje is the Commonwealth’s regional climate finance adviser for Africa. Russia’s war in Ukraine and rising global inflation “are likely to significantly worsen the debt crisis,” she said at Africa Climate Week in Gabon on Wednesday.

High levels of debt repayments and a shrinking fiscal space have prevented much-needed investments in climate resilience, Gichenje said. And climate vulnerability is driving up the cost of accessing capital.

“There is danger that the vulnerable developing countries will enter a vicious cycle,” she said.

The IMF, the Green Climate Fund and the African Development Bank increasingly support debt-for-climate swaps as a solution.

Debt swaps mean that instead of making payments to creditors on outstanding loans, debtor countries can use that money in local currency to invest in climate projects under terms agreed with creditors.

This form of debt relief has been around for 30 years but hasn’t seen much use. Despite some positive examples, including a debt-for-nature swap in the Seychelles, the IMF estimates that only up to $4bn worth of debt has been forgiven under swap programmes.

Cabo Verde, Eswatini and Kenya are among nations looking into how to make debt-for-climate swaps work for them.

“Debt swaps could be a good instrument to give us space in our budget for new investments in renewable energy and the blue and green economy,” Soeli Santos, treasury director at Cabo Verde’s ministry of finance, told the event.

In exchange for partial debt forgiveness, Cabo Verde would, for example, meet some of the commitments made in its 2030 climate plan, Santos said.

The principle generated significant interest during a meeting of African climate experts in Ethiopia last month as part of discussion on climate finance.

The Egyptian Cop27 presidency is considering launching a debt swap framework at the climate summit in November.

And a number of financial institutions have started to explore how to scale up the relief swaps can provide.

Last month, an IMF working paper, co-authored by the fund’s deputy chief in the debt department, concluded that, in some circumstances, debt-for-climate swaps made economic sense.

“There is a space for debt-for-climate swaps in the broader climate finance toolkit,” said IMF senior economist Vimal Thakoor. “In many countries, grants are not forthcoming necessarily and debt relief is not necessarily on the table either.”

However, in countries with high levels of debt distress, swaps should not replace broader debt restructuring programmes, the paper argues.

Scaling up debt swaps requires bringing on board a large pool of private and official country creditors. That is no small task but something creditors might be willing to do to support climate goals, it added.

Although the paper hasn’t been endorsed by the IMF’s board and management, Paul Steele, chief economist at the International Institute for Environment and Development (IIED), told Climate Home it could be “potentially game-changing” should it gain political backing.

The IMF is not alone in exploring options to move this forward.

Andrey Chicherin, head of innovation and technology transfer at the Green Climate Fund, told the meeting that the fund could act as an intermediary in debt swaps by designing adaptation and carbon-cutting programmes and ensure their delivery against the fund’s verification systems and safeguards.

The African Development Bank is finalising a feasibility study on scaling up debt-for-climate and nature swaps in Africa. This is to inform advice to nations on debt relief options.