The constitutional draft declared Chile an “ecological” state, recognised nature as a subject of rights and ordered the state to take actions against the climate crisis 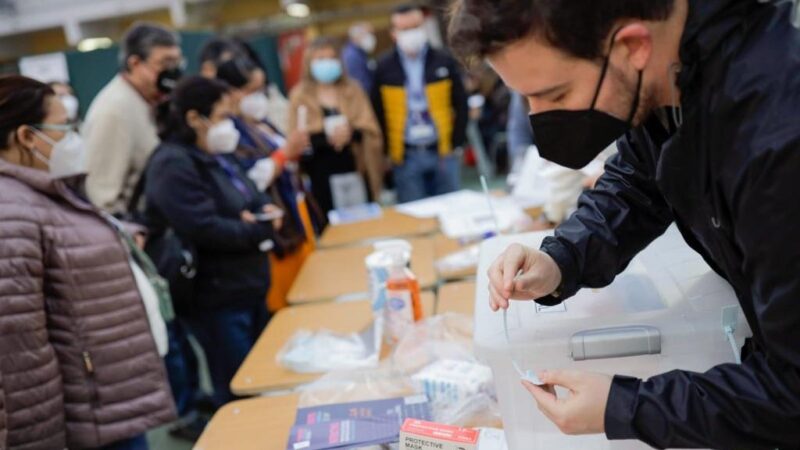 Voters in Chile rejected a draft for a new constitution, which would have significantly expanded environmental rights (Photo: Chilean Electoral Service)

Chile rejected a new constitution on Sunday which, if accepted, would have significantly expanded environmental rights and recognised the urgency of climate action.

In a referendum, the South American nation rejected the proposed constitution by 62% to 38% in favour. Voting was mandatory.

As home to the world’s largest reserves of lithium, a key component of batteries for electric vehicles, Chile is of strategic importance in the global clean energy transition. This comes with social and environmental tradeoffs.

National analysts said the rejection was a “gigantic missed opportunity” to regulate the mining sector in a greener and fairer way. The result leaves Chile with fewer tools to face climate shocks, they said, such as an ongoing 13-year-long megadrought in the central part of the country.

“It’s a gigantic missed opportunity to advance in environmental ethics and a more ecological society,” said former senator Guido Girardi, of the center-left Party for Democracy. Girardi added that this decision must not obstruct climate action going forward.

President Gabriel Boric, who supported the new constitution, said in a statement that the result was an “overwhelming message” of dissatisfaction with the proposal. He plans to push for an improved text, he said.

More than 15 million people were registered to cast a compulsory vote, after a two-year redrafting process. The existing constitution was written in 1980 by Augusto Pinochet’s military dictatorship.

The proposed update significantly expanded environmental rights in the country. It placed limits on the mining industry, such as a prohibition on mining near glaciers, protected areas and drought-prone regions.

It declared Chile an “ecological” state, recognized nature as a subject of rights, ordered the state to take actions against the climate crisis and abandoned the term “natural resources” to use “natural common goods” instead.

“There is a very potent influence of the latest climate and environmental science in this text,” said Chilean lawyer, Felipe Pino, from the environmental law NGO FIMA. In contrast, the Pinochet-era text allows for extractive practices such as the privatisation of water sources and mining in sensitive areas.

After years of discontent, the country erupted in massive protests in 2019. In 2020, the nation voted to convene a constitutional convention, with unprecedented participation of indigenous people, scientists and women.

Disinformation played a major role leading up to the vote. Viral images circulated on WhatsApp falsely claiming the proposal would erase private healthcare and education and criminalise the consumption of meat. “Debate has not centered around the actual content of the document,” Pino said.

The rejection of the constitutional draft creates a lot of uncertainty, said Pamela Poo, a political scientist from Chilean network No Sin Mujeres.

Tensions have risen in recent weeks and there could be protests supporting a new constitutional convention, both Pino and Poo said.

In the lead-up to the vote, supporters of the “reject” movement clashed with backers of the new constitution in Santiago, the country’s capital. In Congress, a right-wing legislator punched the vice president of the Chamber of Deputies just days before the plebiscite.

President Boric invited legislators to meet and discuss the “continuation of the constitutional process”. But the exact way this could happen is unclear.

US-based bank Wells Fargo published a report predicting “a weaker Chilean peso through the end of 2022 and over the entire course of next year”, due to the high political uncertainty.

Given its control over key minerals, Chile can still lead on climate action under the current constitution, said former senator Girardi. “Chile’s resources, its nature belongs to the world. The country can help to face the biggest crisis in humanity’s future.”

Chile exports most of its lithium to South Korea, China and Japan. It is also the world’s top copper producer, an important metal for electrification.

The country’s mining sector has been linked with water pollution, melting of glaciers and human rights abuses.

The constitutional proposal would have limited some of these issues by granting more participation rights to local communities and setting limits to mining in sensitive regions, Poo said. “Now there are no elements to place limits and have a more balanced development between nature and economic growth.”

Poo added that the Pinochet-era constitution leaves the country “totally vulnerable” to climate impacts like drought. “With the 80’s constitution, there is no possibility of fundamentally changing the situation,” she said.