After suffering from extreme drought, farmers have settled in timber plantations in eastern Zimbabwe, clashing with government and industry 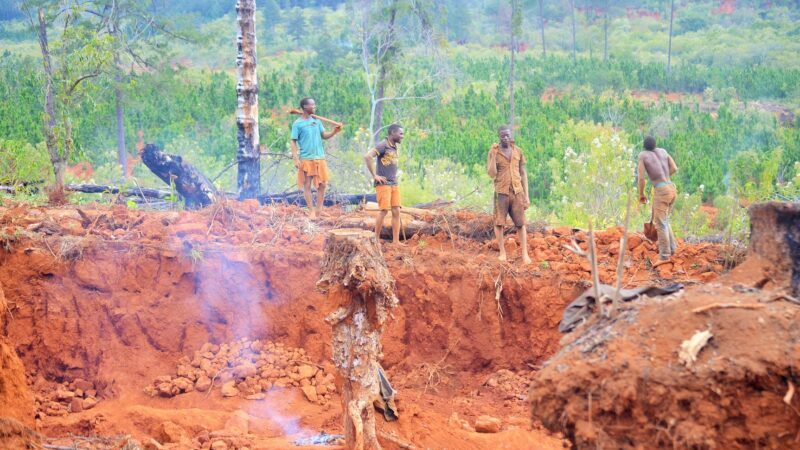 Over the past decade, thousands of drought-hit Zimbabwean farmers have left their homes for the country’s eastern highlands, where higher rainfall gives them better prospects.

As their numbers grow, these climate migrants have settled in an estimated 20,000 hectares of timber plantations, clashing with the wood industry and government.

While other African countries have established policies to address climate migration, the Zimbabwean government has opted for evicting the migrants from the plantations.

Zimbabwean president Emmerson Mnangagwa has called them “illegal settlers” or “squatters”. He claimed during a public event in July that “timber poaching, illegal mining and settlements in the plantations continue to affect” the timber industry.

Migrants declined to be interviewed for this article, for fear of reprisals. Some have previously described to international media how harsh conditions in their home villages drove them to move.

Gift Sanyanga, a coordinator for Haarlem-Mutare City Link, Dutch cooperation organization aiding migrants, said they had no real alternatives. “Unless better adaptive and community resilience building measures are in place in areas of origin, climate-induced migration is likely to remain a big issue,” Sanyanga said.

Over the past decade, Zimbabwe has been hit by severe recurring droughts. In 2019, drought and economic meltdown pushed 7 million people in Zimbabwe into severe hunger, equivalent to half of the country’s population, according to estimates by the World Food Programme.

Climate-related displacement have been widespread in Africa during the last decade, according to the lastest UN climate science report. Migrations to urban areas have particularly increased in sub-Saharan Africa due to drought and household vulnerabilities.

In Zimbabwe, the eastern highlands bordering Mozambique, have become a popular destination.

There, migrants cut and burn swathes of forest to plant crops, timber industry officials report. Some are allegedly involved in illegal gold mining, tearing tracts of standing timber in search of the illusive precious mineral.

Industry body the Timber Producers Federation (TPF) estimates 20,000 hectares are affected. While there are no independent estimates available, ground reports suggest that figure is realistic.

The TPF further claims the companies are losing millions of US dollars each year in export earnings. The value of timber exports stood at more than $20 million in 2021, the TPF reported.

During a public event in July this year, president Mnangagwa called on political leaders, government departments and agencies to “decisively reverse deforestation” in the province by clearing “undesirable activities within our forestry plantations”.

Darlington Duwa, chief executive of the TPF, said the timber industry was “disheartened”, as it had yet to witness removal of illegally settled people.

“Rather than receding, the challenge seems to be worsening as reports indicate that there are new settlers that have moved onto plantations in recent weeks,” Duwa said. “It is no exaggeration that unless the situation is addressed, the future of the timber industry in Manicaland [province] is bleak.”

Some countries in Africa including Niger, Nigeria, Senegal and Tanzania have come up with policies to address climate migration like the Migration and Climate-informed Solutions (MACS).

Others are adapting to climate threats so vulnerable people do not have to move. The city of Beira, in Mozambique, has developed the Beira Master Plan 2035 to make the city resilient to rising sea level and flooding.

Joseph Maposa, a resident in Chimanimani district, said he was worried that the destruction of timber plantations would expose the residents to the effects of heavy winds, cyclones and storms.

Cyclone Idai which hit some parts of Zimbabwe in 2019 had devastating effects, with more than 1,300 casualties in Zimbabwe, Malawi and Mozambique. Experts said some of these impacts could have been mitigated by forest cover.