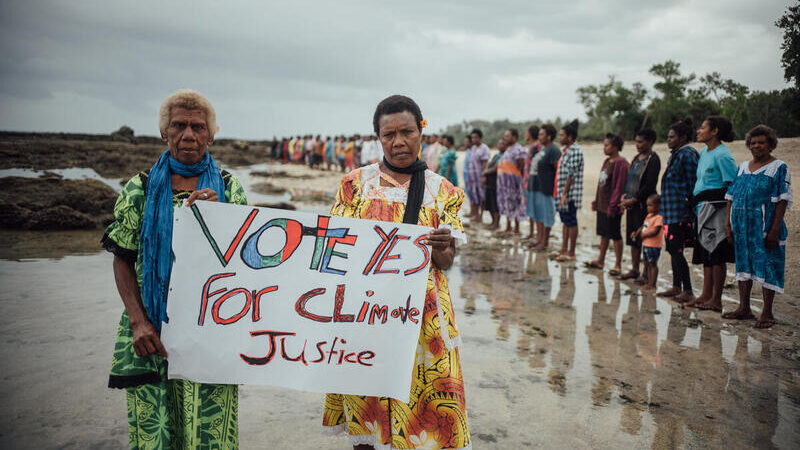 Women in Vanuatu call for support for the country's campaign to request an advisory opinion from the International Court of Justice. (Photo: Steven Lilo/Greenpeace)

Vanuatu, a Pacific island nation of 310,000 people, has called on countries at the UN general assembly to sign up to a fossil fuel non-proliferation treaty, ending all new coal, oil and gas projects and phasing out existing ones.

The island is the first country to call for such a treaty. The Vatican, the UN Secretary General and World Health Organization have all backed ending fossil fuel production worldwide.

“Every day we are experiencing more debilitating consequences of the climate crisis. Fundamental human rights are being violated, and we are measuring climate change not in degrees of Celsius or tonnes of carbon, but in human lives. This emergency is of our own making,” Vanuatu’s president Nikenike Vurobaravu told world leaders in New York on Friday.

Vurobaravu  called for the development of a Fossil Fuel Non-Proliferation Treaty to phase down coal, oil and gas production in line with 1.5C. The treaty would also “enable a global just transition for every worker, community and nation with fossil fuel dependence,” he added.

Michael Poland, campaign director for the fossil fuel non-proliferation treaty initiative, an independent organization calling for such a treaty, said Vanuatu’s proposal was important to start discussions around the issue.

“Vanuatu’s call for a treaty will not only build on this momentum ahead of COP27, but begin a new chapter of diplomatic engagement around the proposal,” Poland told Climate Home News.

Comprising more than 80 islands stretched across 1,300km, Vanuatu is highly vulnerable to rising sea levels and intense cyclones, which frequently cripple its economy.

During his speech, Vurobaravu also urged world leaders to support Vanuatu’s campaign to request an advisory opinion from the International Court of Justice (ICJ) on countries’ legal obligations to protect people from climate harm.

“The ICJ is the only principal UN organ that has not yet been given an opportunity to weigh in on the climate crisis,” Vurobaravu said. “We will ask the ICJ for an advisory opinion on existing obligations under international law to protect the rights of present and future generations against the adverse impacts of climate change.”

If a majority of countries at the UN general assembly give the ICJ a mandate to act, the court will be tasked with interpreting what international human rights and environmental laws mean for countries’ responsibility to act on the causes and impacts of climate change.

The UN general assembly is one of few bodies authorised to request advisory opinions from the ICJ, which settles legal disputes between countries.

It is not expected to lead to reparations for countries that have suffered climate disasters, but could inform climate lawsuits around the world and strengthen vulnerable countries’ calls for more support at international negotiations.

“This is not a silver bullet for increasing climate action, but only one tool to get us closer to the end goal of achieving a safe planet for humanity,” Vurobaravu told the UN assembly.

Palau and the Marshall Islands previously tried to request a similar advisory opinion from the ICJ in 2012, but failed to secure a majority.

A resolution is expected to be introduced to the general assembly in October and a vote will take place in late 2022 or early 2023.

“Vanuatu has now built a growing coalition of more than 80 nations who are backing their call for an advisory opinion from the International Court of Justice,” said Poland. “This initiative, and their call for a fossil fuel treaty, is part of their efforts in pushing for governments to pursue all legal avenues possible towards climate justice.”