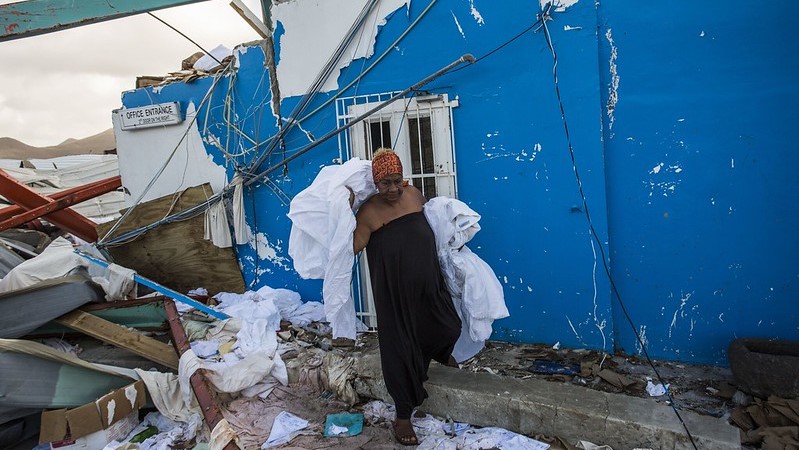 A woman stands in front of her destroyed home after the passage of hurricane Irma in Sint Maarten in 2017 (Photo: Arie Kievit/NLRC via IFRC/Flickr)

Small island states will present a proposal for a “response fund” to help climate victims recover from snowballing impacts at next month’s Cop27 climate summit.

It is more than 30 years since vulnerable nations first demanded support to address the losses and damages caused by fossil-fueled storms, floods and sea-level rise. Rich countries, wary of endless liabilities, pushed back. But with costs of extreme weather mounting, the issue has become unavoidable. It is set to dominate negotiations in Sharm el-Sheikh, Egypt.

The Alliance of Small Island States (Aosis) has drawn up plans for a Loss and Damage Response Fund. This is an evolution of the “facility” proposed by developing countries and opposed by wealthy ones at the Cop26 Glasgow summit last year.

The negotiating bloc is hoping to get broader backing from the group of 134 developing countries known as the G77.

Category 5 Tropical Cyclone Harold devastated Northern Vanuatu, resulting in over US$500 million #LossAndDamage. Development aid to Vanuatu for recovery was < US$100 million. Recovering from #climatecrisis should not detract from our development.#WeNeedLDFinance #COP27 pic.twitter.com/SNGIU3gR8u

Discussions on how to provide financial support to developing countries hammered by worsening climate impacts remains one of the most contested issues in the talks.

Disastrous flooding in Pakistan, which left the government with a reconstruction bill of more than $30 billion, has sharpened calls for an urgent solution to the deadlock.

Wealthy countries argue that existing financial instruments can be enhanced to meet some of the needs. The EU is working on a package of alternative funding options. This includes Germany’s Global Shield initiative, backed by the G7, to strengthen disaster risk finance and insurance.

But Robertson said the gaps in the existing financial architecture are too great. A dedicated funding structure would help disburse funding from different propositions, including the Global Shield, and avoid a piecemeal approach, he explained.

“This fund is not a panacea. It’s not going to solve everything,” said Robertson. But it can be “catalytic and begin to pilot approaches in areas where other funds are not set up to deal with loss and damage response”.

Aosis tested the idea last month at a seminar hosted by the European Capacity Building Initiative in Oxford, UK. It would follow a similar model to the UN’s flagship Green Climate Fund, with regular – voluntary – fundraising rounds. Government donors should deliver support mostly as grants, on top of existing climate finance commitments, the bloc envisions.

Other potential sources of revenue include – as UN chief António Guterres advocates – a windfall tax on oil and gas companies’ profits.

Governments and communities would apply for budgetary support to rebuild their economies and critical infrastructure. This could include activities such as cleaning up ecosystems, rehabilitating cultural sites and restoring education and health services.

Money could also go to communities threatened by slow-onset events such as sea level rise or desertification, for example to help them relocate with dignity.

“What we are discussing is purpose-driven financing. We are trying to make sure that we can get money that is going to get us the results and the effectiveness that we need,” said Robertson.

While recognising the proposal is unlikely to win universal acceptance at Cop27, Robertson hopes it will bring solutions within reach over the next 12 months.

“We’ve been burnt so many times trying to be as pragmatic as possible and as reasonable as possible but I really want to be optimistic,” he said.

Aosis hopes an agreement to operationalise the fund could be reached by Cop28 in 2023.