While methane emissions from oil and gas infrastructure and landfills are seen as low-hanging fruit, governments are wary of tackling cows 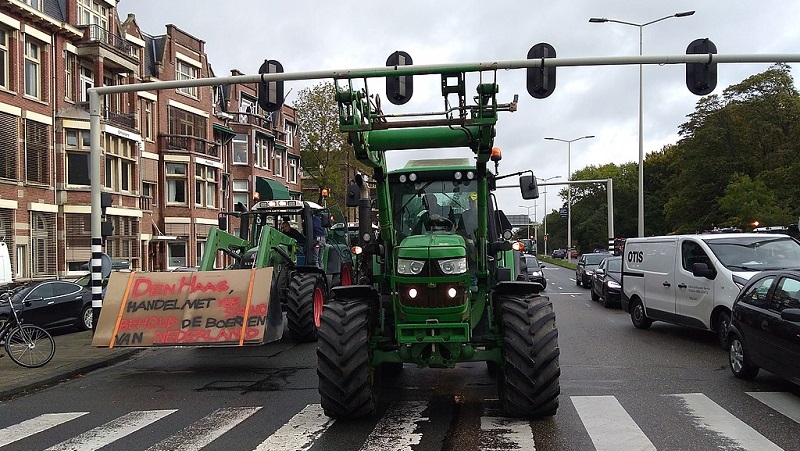 Around the world, the fear of farmers’ protests is deterring governments from reducing methane emissions from cows and sheep.

At Cop26 last year, over 100 governments said they would collectively reduce emissions of methane, a particularly damaging greenhouse gas, by 30% between 2020 and 2030.

Agriculture is responsible for nearly half of the world’s total human-caused methane emissions. Most of this is from cows and sheep burping.

But, wary of tractor convoys descending on their capitals, governments have largely avoided measures to tackle these emissions.

They’ve chosen instead to focus on the relatively easy target of capturing the methane that is a byproduct of extracting and moving fossil fuels, and the gas that leaks out of rotting landfills.

Nearly twice as many countries have policies to reduce methane emissions from landfills as they do for agriculture, according to World Resources Institute analysis.

More countries have plans to reduce methane emissions from waste and energy than from agriculture. (Photo: World Resources Institute)

The US’s recent inflation reduction act is a good example. It will introduce a methane fee on emissions from oil and gas facilities which does not apply to agriculture. Despite this, Republicans have falsely accused the Biden administration of planning to ration beef consumption and tax cow farts.

Marcelo Mena is CEO of the Global Methane Hub, which was set up in April to implement the methane pledge. He told Climate Home that countries whose methane comes more from fossil fuels should have more ambitious targets than those whose methane comes largely from cows.

“The collective goal is 30%. But that’s a collective goal,” he said. “We expect the major emitters that have a lot more proportionate emissions in the energy sector to do a lot [more].”

One country which is trying to tackle its farming emissions is New Zealand. Nearly 90% of its methane is from cows and sheep and Greenpeace said its previous climate plan had a “cow-shaped hole”.

To fix this hole, its government is proposing a “farm levy”. The media and opposition prefer to call it the “fart tax” or “burp tax”.

This would charge farmers around NZ$3-5 (US$2-3) per tonne of carbon dioxide equivalent of the methane they produce. Other New Zealand polluters pay NZ$85 (US$48) a tonne under the emissions trading scheme.

The money would go to research into green farming and rewards for climate-friendly farming methods.

Yet cattle ranchers are up in arms. New Zealand’s biggest farmers association said it would force farmers to sell up and  “rip the guts out of small town New Zealand, putting trees where farms used to be”.

A right-wing group called Groundswell mobilised 50 farmer protests around the country last Thursday – although turnout was smaller than expected.

This controversy has reached across to Australia, where the government has become the latest to join the global methane pledge, despite preemptive agricultural lobbying.

A leading farmers group in the Australian state of New South Wales said “it is opposed to Australia signing up to a global ‘methane pledge’ that is killing small towns [in New Zealand]”. The “burp tax” has yet to be introduce in New Zealand.

Australian opposition politicians have claimed that signing the pledge will lead to “shooting cattle”, “T-bone tax” and the end of the Australian barbecue.

We heard warnings about an end to the Aussie barbeque, a T-bone tax and so on if Australia joins 120 other countries in signing a pledge to reduce methane emissions.

But for rhetorical flourish – no one was ever going to outdo Barnaby Joyce.#Insiders #auspol pic.twitter.com/ZHYkbS0HJ2

Even Rob McCreath, from the lobby group Farmers for Climate Action, told the ABC that agriculture “shouldn’t be sucked into” methane cuts, which should focus on the oil and gas sector.

Where livestock lobbyists and governments accept that action is needed, they prefer technological solutions to curbs on meat consumption and headcount of farm animals.

US, Germany back ‘fundamental reform’ of World Bank to scale climate finance

Mena agreed that while reducing meat consumption is part of the answer, “sustainable beef” is possible.

He touted “methane inhibitors”. Feed additives from seaweed or fats and oils can reduce the amount of methane cattle produce. It’s easier to add these to the cows’ diet if they eat from a trough than if they’re free-ranging.

The Global Methane Hub is working directly with major beef producers like Argentina, Uruguay and Chile on their methane-cutting plans, Mena said.

Emissions from oil and gas are easier – if not easy – to reduce as doing so can make fossil fuel companies money.

Methane leaks from oil and gas pipelines and is deliberately vented or flared as a waste product. Companies allow it to escape because they either don’t know it is leaking, don’t know how to fix it or they think fixing it will cost them more than it saves.

By providing technological know-how, like satellites or video cameras that can monitor leaks, oil and gas companies can reduce their emissions and capture methane to sell to their customers as gas. Burning methane for power produces less greenhouse gas emissions than letting it leak into the atmosphere unburned.

But technology will not be enough, Mena said, calling for regulations and carbon pricing. “The economic case [for capturing and selling wasted methane] does not outweigh the short term profits that the oil and gas sector is focusing on today at the expense of the environment.”

Pakistan: funds for flood relief too little, too late

The US-led “net zero producers forum” launched in April 2021 but took nearly a year to convene its first meeting and has achieved little.

At the major economies forum in June, the US and EU pushed for a joint initiative on reducing methane from oil and gas. They are expected to push this further at the Cop27 climate talks.

Mena hinted that Cop27 will also see announcements on whether methane pledge signatories’ individual methane targets add up to 30% collectively.

Mena said organisations like the International Methane Emissions Observatory, Climate and Clean Air Coalition and Global Methane Pledge secretariat can help with that.

Targets are little use without effective monitoring and Mena said that there will be “major developments on making use of satellite information for accountability” at Cop27.

An NGO called Carbon Mapper has announced plans to send a Nasa jet to monitor methane emissions over sites like landfills and oil and gas pipelines in Latin America by February.

Satellites have already revealed that landfills are responsible for up to 50% of some countries’ methane emissions and that methane emissions from Arabian Gulf states are nearly ten times greater than reported.