Africa’s broken food markets must be fixed to tackle hunger

Comment: A handful of large companies make big profits by controlling the food trade in Africa, while doing nothing to increase its climate resilience 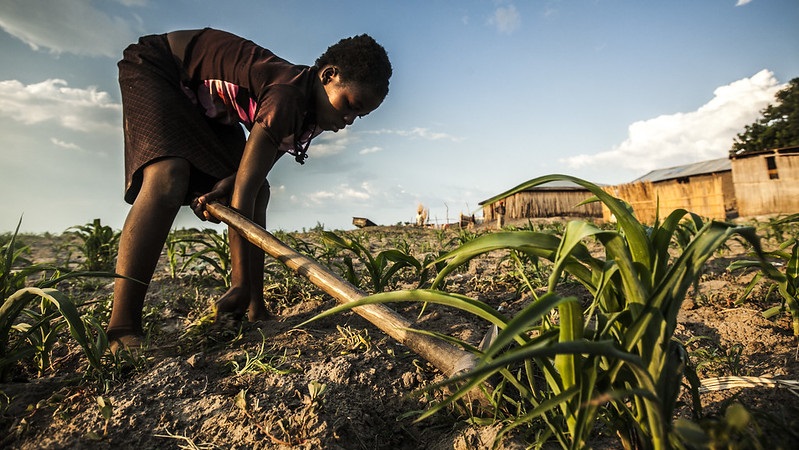 A young woman weeds in a field of winter maize grown on a flood plain (Photo: WorldFish/Felix Clay/Duckrabbit, 2012/Flickr)

In 2011 more than a quarter of a million people died of hunger in Somalia. Eleven years later, the United Nations warns that an even worse famine is on the horizon.

More than 300,000 people in Somalia will be in famine by December, despite pledges in 2011 that this should never happen again. The looming famine comes as food prices in Africa hit record highs this year.

All over the world food prices have escalated. Yet consumers in many African countries, especially in East Africa, have had to deal with far greater price hikes, than the global increases.

A large part of the blame for high food prices has been laid at the door of the Russia-Ukraine war. While this has undoubtedly compounded the scarcity resulting from climate change impacts, the main reason lies much closer to home.

The reality is that Africa’s food markets are broken, exacerbating the effects of climate change caused by emissions to which Africa made little contribution.

Drought in Somalia and in parts of Kenya have seen record food prices, with key staples such as maize meal shooting to historic highs. As food prices soar, food security continues to worsen.

Yet African countries have enormous potential to sustainably expand production and reverse their import dependence, if they can circumvent the defective food markets. The so-called African Cop, Cop27 cannot shy away from tackling issues around broken markets head on to construct resilient regional value chains.

Probing the broken markets starts with taking a closer look at value chains, and the hold that big corporations have on Africa’s food markets.

Farmers have increasingly become reliant on a small group of suppliers and buyers. For example, the trading of agricultural commodities and key inputs such as fertilizer is controlled by a handful of transnational corporations. This was evident in Zambia in 2018 where four poultry hatcheries linked to these companies were fined for fixing trade conditions and setting production quotas in a long-running cartel case. Other competition cases against transnational corporations are ongoing.

Recent research points to farmers in countries such as the promising Zambia receiving low prices for their products, while consumers in East Africa pay high prices for their food, and intermediaries along the way capture most of the value.

Why the higher prices?

The Centre of Competition, Regulation and Economic Development (CCRED)’s research shows that maize prices in July in East Africa were 30-40% higher than they should have been.

At present, markets are working against, rather than towards the adaptations required. Maize prices show huge margins between the areas of demand and areas of supply, which are not justified by transport costs.

Market concentration among buyers means that farmers are often offered low prices for their outputs, lowering their returns. These farmers, who could easily produce more, opt to produce less because of the unfairly low prices. Maize production in Zambia in 2022 is 25% lower than last year as farmers are squeezed between high fertilizer prices and low crop prices.

Yet at the same time consumers in East African urban areas are paying exceptionally high prices for food on the shelves.

CCRED’s analysis suggests that markups along the value chain are translating into super profits for large traders and processors. This is especially devastating for low-income households, often using around 40% of their income to buy food.

Cross-border trade is not happening efficiently with infrastructure limitations and a small pool of logistics operators dominating the market. As climate change intensifies production volatility can easily be exploited by firms with this significant market power.

The first is investments into the necessary infrastructure for the expansion of irrigation. Around 95% of cropland in Africa is rainfed, creating substantial risk in times of drought.

Secondly markets need improved monitoring, with a focus on how climate change is impacting production systems. Vast amounts of data are being collated by private market participants, who use it to increase their lobbying power and increase profits. The same data, if publicly accessible, could ensure farmers are receiving adequate prices for their produce and that consumers are not overcharged.

Finally, there must be effective refereeing of markets and a strengthening of competition authorities. The burden of proof must be placed on large gatekeeper firms who are currently able to distort markets in their favour and abuse their dominance.

Malik Dasoo is a researcher on sustainable agriculture at The African Climate Foundation. Simon Roberts is an economics professor and lead researcher at CCRED at the University of Johannesburg. Ntombifuthi Tshabalala is an economist and assistant lecturer at CCRED.