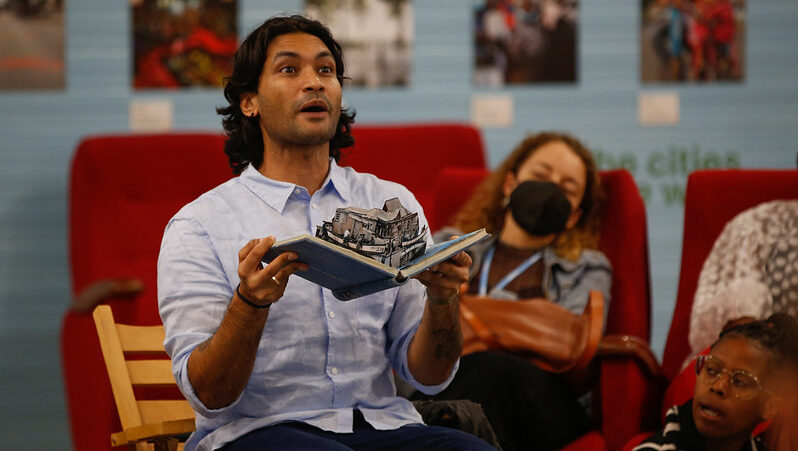 A performer in "Listen to the Sea", an interactive play by South African collective Empatheatre, at Cop27 (Pic: Kiara Worth/UNFCCC/Flickr)

It’s to the beach resort of Bali rather than Sharm el-Sheikh that ministers at Cop27 will be paying attention today.

The leaders of 20 major economies are meeting on the Indonesian island amid increased geopolitical tensions. The climate outcome of the meeting will shape what happens next at Cop27.

At the heart of the discussions is whether the G20 will recognise limiting temperature rise to 1.5C. Ministerial talks collapsed in September when China and India pushed back against the 1.5C goal.

On Tuesday, language on the 1.5C goal remained in the draft text. It echoed the wording agreed at the G20 summit in Rome in 2021 when leaders “recognise[d] that the impacts of climate change at 1.5C are much lower than at 2C” and that keeping 1.5C within reach requires stepped up action.

Whether that language survives political wrangling today is critical to the political signal leaders in Bali send Cop27. In Egypt, the 1.5C goal is under discussion in the context of a cover decision to the climate summit.

“It’s a worrying day,” Zambia’s green economy minister Collins Nzovu told reporters at Cop27. The absence of the 1.5C target “will be a failure of Cop27. It’s very clear that our action must align with 1.5C. We want to urge the G20 to come to the table and do the right [thing],” he said.

India’s call to phase down all fossil fuels in the Cop27 cover decision may have been a gambit to deflect from its coal reliance. But it is getting serious traction.

Coal still accounts for half of India’s installed generation capacity. Glasgow’s groundbreaking call to phase down unabated coal power put India on the spot. Now Delhi is putting the heat on oil and gas producers.

A growing number of delegations are backing the proposal.

The group is demanding “stronger language than Cop26. We’re inviting the developed world to come to Africa. The land of renewable energy,” he said.

Among rich countries, the EU is on board. “We are in support of any calls of phasing down all fossil fuels,” climate chief Frans Timmermans told a press conference Tuesday. But this “should not divert our attention and out effort to phase down coal as we have agreed in Glasgow”.

It’s unclear whether Egypt will introduce the proposal in the first draft cover decision, which is expected any moment now. It wasn’t part of “elements” for a cover text published by the Egyptians on Monday.

If it does, expect some fireworks with the world’s largest oil and gas producers, not least the Arab Group.

India’s gambit comes as Delhi is working through its roadmap to decarbonisation.

In Glasgow, Narendra Modi took the world – and even Indian analysts – by surprise when he announced a 2070 net zero goal. Modi didn’t make the trip to Sharm el-Sheikh but on Tuesday officials launched a 121-page document on how India could deliver.

It sets out the broad framework for how India plans to decarbonise across six sectors – energy, transport, buildings and cities, industry, carbon removal technologies and forests – and the finance needed.

On energy, India is planning a rapid expansion of renewables, a significantly greater role for nuclear energy, a “rational” use of fossil fuel resources and the closing of inefficient coal power plants.

“It’s a messy process of stirring the soup until it crystalizes. This is an important first step in the crystallization process,” Navroz Dubash, of the Centre for Policy Research, which was consulted in the drafting process, told Climate Home.

The document doesn’t set sectoral targets and only goes as far as 2050, but Indian analysts at Cop27 were upbeat about progress.

“India is definitely coming from a position of strength,” said Vaibhav Chaturvedi of the Delhi-based Council on Energy Environment and Water (CEEW).

The Cop27 host Egypt has increased its use of mazut, a heavy fuel oil, in power stations to free up gas for export to Europe. The move goes “in complete contradiction with the climate conference,” a whistleblower inside the Egyptian Ministry of Electricity told Climate Home.

To lead talks on key issues, the Cop27 team have largely chosen the same ministers in the same roles as at Cop26.

On the mitigation work programme, they’ve chosen Denmark’s Dan Jorgensen – the main man behind the Beyond Oil and Gas Alliance.

At Cop26, he led emissions cutting talks with Grenada’s Simon Stiell. Now Stiell is in charge of the UNFCCC so he’s been replaced by South Africa’s Barbara Creecy.

There are some new faces. India’s Bhupender Yadav and Australia’s Chris Bowen team up on finance, particularly on setting a new post-2025 goal to replace the failed $100bn by 2020 target.

Perhaps the toughest job, loss and damage, remains in the hands of Germany’s Jennifer Morgan and Chile’s Maisa Rojas.

Rojas is a climate scientist while Morgan is a former rabble-rousing Greenpeace head who risked getting kicked out of the last Cop for protesting a side event.

What’s in a colour?

There was a lot of buzz around green hydrogen on Tuesday. But some want you to see past colour.

The Saudis are pushing to cut the word “green” from a reference to “green hydrogen” in a Cop27 text on emissions reductions.

Chukwumerije Okereke, who was involved in the drafting of the relevant IPCC report, told Climate Home in Cop27 corridors that was the Saudis’ doing too.

The Saudi government had “prepared extensively” for the meeting and pressured the scientists into not using the term “green hydrogen”, Okereke said. “They made us say it.”

Green hydrogen is made with renewables and the Saudis argued that it was “not proven at scale,” Okereke said. They are in the more established, and more polluting, business of making hydrogen from methane gas. That’s known as grey or, if (hypothetically) coupled with carbon capture and storage, blue hydrogen.

The latest draft of the mitigation work programme text had “green” in square brackets, meaning it is up for debate. So the Saudis’ long game may pay off.

An apology – Some have suggested that our Monday newsletter “Visionless summit flails into week two” was unfair on the Egyptian hosts. We accept that “rivers of sewage” was an exaggeration. There was one sewage leak in week one that was swiftly fixed. Sorry.

Ambition upped – Turkiye has pledged to reduce its emissions, compared to a business-as-usual scenario, by 41% by 2030. Its previous target was 21%. It will aim to peak emissions by 2038. That leaves a steep drop to its net zero by 2053 goal.

Polluters plot – The key blocs of gas exporters and oil exporters, GECF and Opec, held a joint meeting at Cop27 on Monday to discuss the negotiations. With climate watchers counting at least nine gas deals announced on the sidelines, it looks like they’re winning.

Alaa eats – Alaa Abd el-Fattah has broken his hunger strike, according to a message sent to his mother and shared by his sister Sanaa Seif. He asks them to bring cake for a visit on his birthday on Thursday. “I’m OK,” he writes.

Media backs polluter levy – More than 30 media outlets from over 20 countries around the world have called for a global windfall tax on fossil fuels. Small islands have called for such a tax to fund loss and damage.