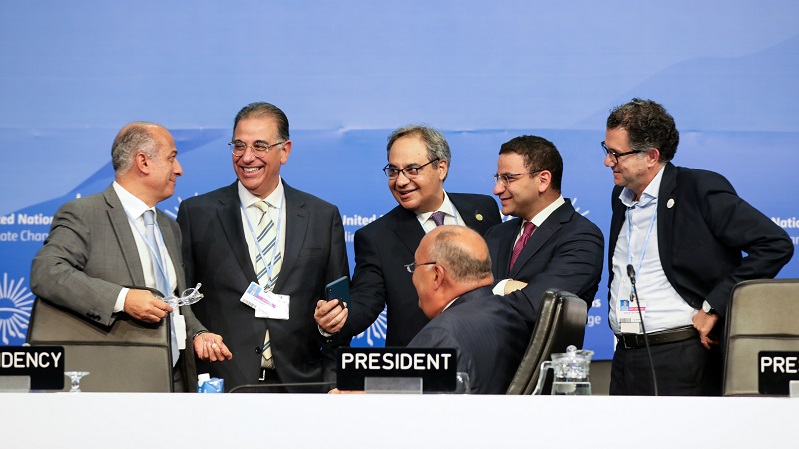 There is less than 48 hours to go before Cop27 is due to end. In the early hours this morning, the Egyptian presidency published a second, 20-page sketch of the “elements” a cover text might include.

This is not a text that has been discussed by countries but elements reflecting what Egypt has gathered from consultations with countries. Formal negotiations on the text are yet to start.

A proposal by India, which has been gathering steam among vulnerable countries and the EU, to phase down all fossil fuels didn’t make it in.

Instead, the document repeats what was agreed last year in Glasgow and reaffirmed by G20 leaders in Bali on Wednesday on coal power.

Under the heading “urgency of action to keep 1.5C within reach”, the document repeats the language of the Paris Agreement to “pursue efforts” to limit temperature rise to 1.5C.

Elsewhere, the text “notes” that climate impacts will be much lower at 1.5C, “requests” all countries to revisit and strengthen their 2030 climate plans in line with 1.5C, and “emphasizes the need for immediate, deep, rapid” emission cuts.

Borrowing from a recent statement of the Basic emerging economies, it proposes to “express deep regret that developed countries who have the most capabilities financially and technologically to lead in reducing their emissions continue to fall short in doing so”.

It adds: “Developed countries should attain net-negative carbon emissions by 2030.”

Indian power minister Raj Kumar Singh has previously called on rich countries to go beyond net zero emissions to net negative by sucking more carbon out of the atmosphere than they emit.

If Egypt wants to secure a successful outcome, it urgently needs to bring the discussion into negotiating rooms.

With very limited appetite to allocate new funds for loss and damage, rich countries see the best prospects of support for climate victims outside the UN climate process.

Reform of multilateral development banks and the International Monetary Fund could free up significant cash for the vulnerable. But that won’t happen in Sharm el-Sheikh, where the developing world wants to see more commitment.

So the developed country tactic here is divide and conquer: drive a wedge between the poorest and smallest nations, and big emerging economies.

Island leader Gaston Browne last week expressed support for broadening the donor pool: “We all know that India and China… are major polluters and the polluters must pay.” Then G77 solidarity reasserted itself and he clarified that historic emissions had to be factored into the assessment.

The EU has sent its strongest signal yet that it would consider setting up a new fund, as the G77 asks, with strings attached.

“We are open for this facility, but under certain conditions,” EU’s climate chief Frans Timmermans told reporters squashed in a huddle outside the EU pavilion on Wednesday afternoon.

“China is one of the biggest economies on the planet with a lot of financial strength. Why should they not be made co-responsible for funding loss and damage?” said Timmermans.

And he wants to keep other options on the table, with a decision to be made next year.

China already contributes some voluntary climate finance to developing countries. It doesn’t want its generosity to turn into an obligation.

There are still big gaps to bridge.

Brazil’s president-elect Lula da Silva got a hero’s welcome at Cop27, bringing hope for the Amazon rainforest with him. Crowds chanted his name and Facetimed relatives during his first speech. (Photo: Kiara Worth/UNFCCC)

For all the talk about phasing out oil and gas, only a handful of countries are committing to ban or wind down production. They’re generally not ones that were drilling much (or at all) to start with.

On Wednesday, Portugal and Washington state joined the Beyond Oil and Gas Alliance (Boga). That brings the core membership to six national and four subnational governments (double counting Greenland as part of Denmark).

But founding member Costa Rica has distanced itself from the initiative and Sweden’s backing is uncertain after a lurch to the right.

Still, a Boga event on Wednesday was well attended, with campaigners cheering it on.

Perhaps the most significant political signal came from Kenya becoming a “friend” of Boga – the first African nation to do so. “We have proven [oil] deposits,” said presidential climate advisor Ali Mohammed, “but the Kenyan government has taken a deliberate choice [not to exploit them].”

Kenya’s enthusiasm for renewables sets it apart from the likes of Senegal, Nigeria and Mozambique, which see gas as critical to their economic development.

With money provided by the Sequoia foundation, Boga has launched a €10m seed fund to help developing countries initiate their just transition beyond oil and gas production.

After journalists asked where Costa Rica was and why no big oil and gas producers are joining, the Danish moderator said “this is not a press conference” and turned to civil society.

A Stop Eacop activist didn’t softball it, though, putting France on the spot over Total’s controversial Uganda-Tanzania oil pipeline. Ambassador Stephane Crouzat promised France would not provide export subsidies to the project.

Climate the culprit – Climate change made this year’s flooding in Nigeria and neighbouring countries 80 times more likely, according to the World Weather Attribution group. The floods killed more than 600 people and displaced 1.3 million between June and October.

Data drought – The same group of scientists were unable to estimate the influence of climate change on last year’s drought in central Sahel, which caused a food crisis this year, because of a lack of reliable data.

Trump is running – Donald Trump has announced that he will run to be US president again. To win the Republican nomination, he’s likely to compete with Florida governor Ron DeSantis.

Forest sign-ups – Vietnam and Fiji have joined the global forest and climate leadership partnership, a spokesperson for the UK government told Climate Home. They join around 30 countries representing a third of the world’s forests in the US and Ghana-led partnership.

Gender equality stalls – Just a third of negotiators are female at Cop27, BBC analysis finds. Carbon Brief got a similar figure. Their analysis finds the percentage has trended upward for decades but has plateaued in the last few years.

Fox in hen house – The head of the Gas Exporting Countries Forum, Mohamed Hamel, has addressed the main conference hall at Cop27. He said Africa’s “sovereign right to develop these natural gas resources shall be preserved” and that “gas is the energy for sustainable development”.

Methane ministerial – The US and EU have invited the 100+ countries who signed last year’s global methane pledge to a ministerial meeting tomorrow in the Amon room at Cop27. Ministers will unveil national methane action plans, “showcase progress” on energy and launch programmes to cut methane from farming and waste.